The University of New Mexico celebrates another milestone in the construction of its new Physics & Astronomy and Interdisciplinary Science (PAÍS) building with a ceremonial beam raising highlighting the completion of structural framing.

The event takes place Wednesday, Oct. 17 at 11 a.m. at the PAÍS construction site located at the northeast corner of Redondo and Yale Blvd.

When it opens in Fall 2019, PAÍS (Physics, Astronomy and Interdisciplinary Science) will be a state-of-the-art facility serving as a hub of innovation and research while providing space for students, faculty and staff to collaborate on many of the leading interdisciplinary issues facing the world today. Its construction was made possible by General Obligation (GO) Bond money approved by New Mexico voters in 2016.

Light refreshments will be served following the formal program.

WHO: The University of New Mexico
WHAT: PAÍS building ceremonial beam raising
WHEN: Wednesday, Oct. 17, 11 a.m.
WHERE: Northeast corner of Redondo and Yale Blvd. 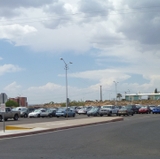