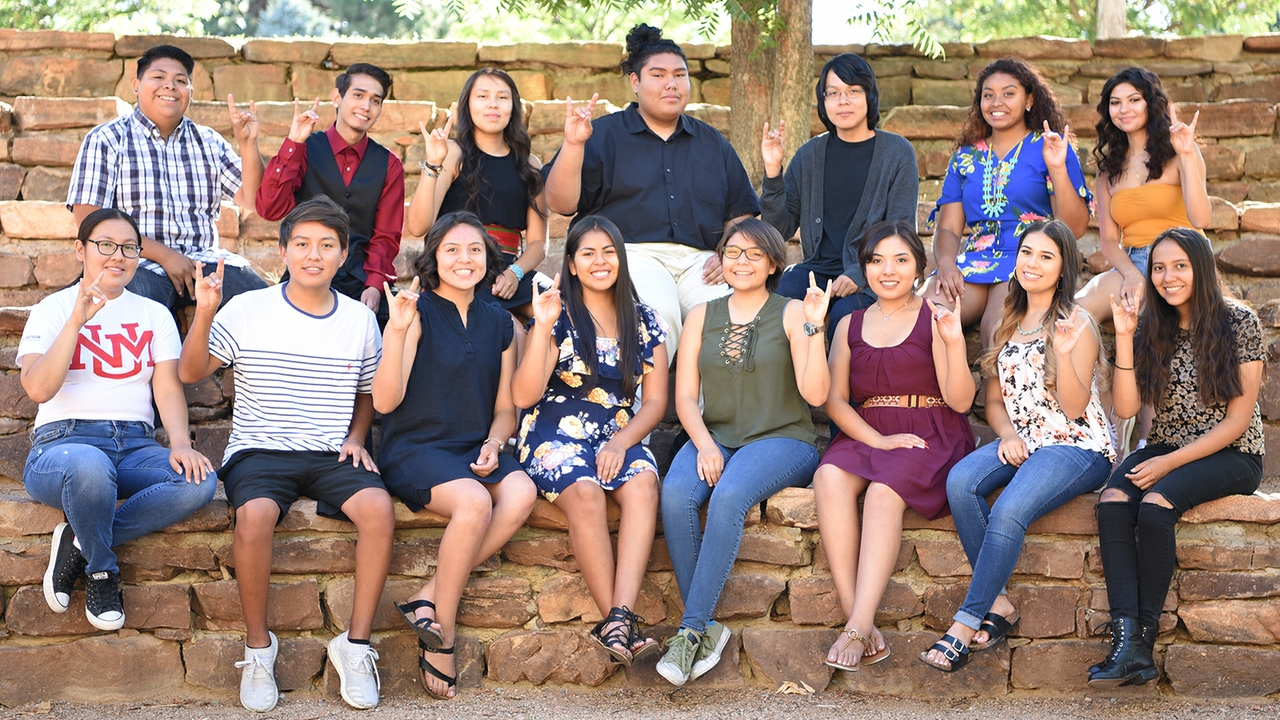 Every college strives to bring students to their campus and see them through to graduation, and The University of New Mexico (UNM) is no exception. In addition to strong academic programs, a number of elements factor into student retention, and this is especially true for students of color.

“The program runs for five weeks in the summer, but it doesn’t end there,” says AISB program coordinator Jeannette Stahn. “We have cohorts of students and we follow them through their college careers. As they move through UNM, undergraduate and graduate, we’re meeting with them every semester to go over academic advisement, but also – one of the number one retention factors – financial advisement, ensuring that they can in fact continue through.”

This year marks 20 years of the AISB program, and the students participating are thrilled to be involved.

Taylia Vallo, a 17-year-old from Acoma Pueblo, will be majoring in Psychology with a minor in Biology. For Vallo, attending college classes for five weeks of her summer isn’t a sacrifice, it’s an opportunity.

“It means a lot to me because I always took academics really seriously throughout high school,” Vallo says. “In the Summer Bridge program, they’re teaching me about getting more involved, building your resume, how to get scholarships, how to improve your GPA, how to make friendships and take advantage of all the resources around campus… You’re not alone here. The AISS offers so much for Native American students. They’re always willing to help you get where you need to be.”

One of Vallo’s classmates, Kymon Palau, an 18-year-old who is part of the Navajo Nation and also Tongan (a Polynesian tribe), will major in Interdisciplinary Film & Digital Media this fall.

“Coming into college is a scary thing,” Palau says. “It’s not like high school, where you dress to impress; it’s more like you’re trying to impress yourself. I want to move myself forward, and I think making connections in the Summer Bridge program will make the transition process much easier and more fluid.”

Getting ahead is a driving force for both Vallo and Palau, and the latter will be using that ambition to work his way toward an early degree.

“I talked to my advisor and planned out my degree,” Palau says, “and I will be graduating in three years instead of four.”

The Summer Bridge program first started as a collaboration with the Navajo Nation, establishing services that would help bring American Indian students to UNM, support them in their transition from high school to college, and see them through to graduation.

“From that partnership with the Navajo Nation,” Stahn says, “the program has grown and expanded. Since its inception, 376 students have matriculated and completed the program, representing 50 different tribal nations from all over the US.”

While the program is designed as a support system, there’s no coddling involved. Successfully completing up to eight credits in five weeks takes a lot of hard work and determination on the part of every student involved.

“It’s a huge commitment,” Vallo says. “You have to put your full heart into it. We work together as a team; it’s not just one individual, we have a lot of tutors who are willing to help us. I really recommend this program to any other youth who are thinking of enrolling in it, because you’ll thank yourself later. It’s a challenge, but it’s worth it.”

Mentorship in the program comes not just from faculty but also from other students.

“We have a great team, we have great faculty,” Stahn says. “We also hire our student leadership team, which consists of residential advisors and tutors, and they work with the students daily, and they’re amazing.”

Stahn emphasizes that for all the talk of “siloed” departments on campus, the AISB program could not be such a huge success without the assistance and support of numerous partnerships.

“We have great partnerships within UNM, and with their support we’re able to run this program,” Stahn says. “I couldn’t even name them all, there are so many, and I don’t want to forget anyone! I will say, we have such a great support team around us, which is how we can ensure the success of this program.”

As part of the twentieth Summer Bridge cohort, there’s a lot of pride among the participating students. They feel the weight of the history behind the program, and the significance of what it means to be an American Indian college student today.

“For me it’s representation,” Palau says. “Indigenous peoples aren’t represented highly in education, we aren’t favored in education, so I think gaining a degree with tribal affiliation will prove that we can do it, too.”

Palau also feels strongly about the value of education and is honored to be a part of the Summer Bridge program. When asked what it means to him to be here, preparing for his journey through higher education, Palau takes a moment before answering.

“If I could put it in one word, it would be Success. Being successful in everything you do, it sets you apart from the person next to you,” Palau says. “You’re allowed the freedom to do more things when you have an education. You go through life with a different perspective, rather than conforming to others around you.”

Vallo chimes in to agree that an education gives you a leg up in the world, and to recognize the commonalities they share with the rest of their cohort.

“College is a new experience, it’s a new life. I’m excited to meet people who have the same goals, who will push me to succeed and make something better of myself, and to help other people do the same,” Vallo says. “Coming from small tribes, like we all have, we’re going to prove to other people, other kids, that we’re capable of making it in the world and achieving our dreams.”