The University of New Mexico Department of Physics & Astronomy is hosting a free public lecture featuring Nobel Prize winner W.E. Moerner on Thursday, May 11 at 3:30 p.m. 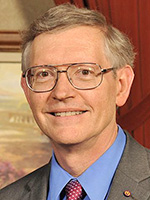 Moerner, the Harry S. Mosher Professor of Chemistry and Professor of Applied Physics at Stanford University, was awarded the 2014 Nobel Prize in Chemistry for his work developing super-resolution fluorescent microscopy techniques. Moerner’s work is credited with giving scientists the ability to visualize single molecules and see individual cells in a living organism – both huge advancements in science.

The lecture, titled ‘What Can You Learn from Watching Single Molecules? From Super-Resolution Imaging to Nanoscale Probes of 3D Dynamics in Cells’, will cover a wide-range of topics and explore some of the newest developments in super-resolution microscopy, presented by one of the most distinguished researchers in the field.

Summary from the department:
“It has now been more than 28 years since the first optical detection and spectroscopy of a single molecule in an industrial research lab. The progress beyond the early low-temperature, high resolution spectroscopy to the present has been astounding. By measuring the light emitted from individual molecules, one at a time without ensemble averaging, we can ask: Are they all the same, or do they march to different drummers? Combining imaging of single molecules with a method to control whether most of them are off or on, it is now possible to circumvent the fundamental diffraction limit of light to achieve "super-resolution imaging". Before this advance, optical images were always fuzzy on spatial scales less than 200 nm. Now, super-resolution techniques open up a new frontier in which biological structures and behavior can be observed in fixed and live cells with resolutions down to 20-40 nm and below. Examples range from protein superstructures in bacteria to details of the shapes of amyloid fibrils and much more. Current methods development research addresses ways to extract more information from each single molecule such as 3D position and orientation, and ways to ensure that the acquired data are both accurate and precise. It is worth noting that in spite of the current excitement about super-resolution, even in the "conventional" low concentration, single-molecule tracking regime where we simply watch the motions of individual biomolecules, much can still be learned about biological and materials dynamics.”