Clark came to UNM in 1995 and is currently UNM’s Sustainability manager within the Physical Plant Department. As a former Staff Council (SC) president and current SC speaker, Clark has been involved in the organization for many years and continues to be a strong advocate for staff throughout the University.

“I've sat on Staff Council for over 10 years and continue to see it's increasing importance as the voice of staff to the administration,” said Clark. “I'm extremely proud to be recognized by Staff Council with this award for my service to the Council and representation of my constituents at the Physical Plant Department.” 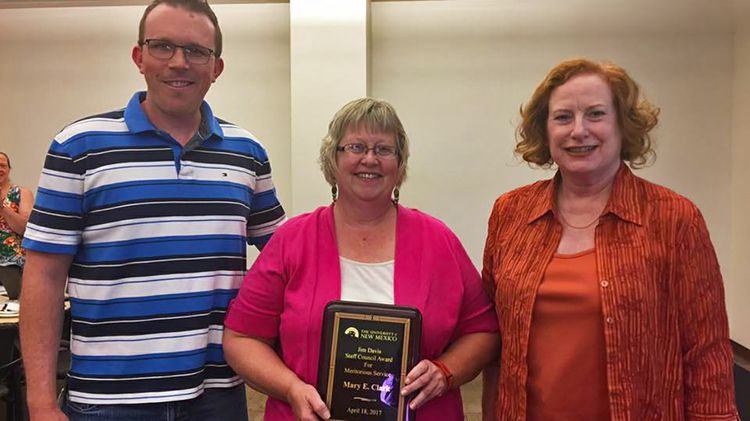 Mary Clark (center) was the recipient of the 2017 Jim Davis Staff Council Award for Meritorious Service.

Over the years, Clark has been a mentor to several SC presidents and continues to provide guidance to the Executive Committee, according the nomination form submitted by a fellow staff councilor. While acting as SC president, the nomination form goes on to say that Clark worked closely with UNM administration as well as state legislators to pay attention to the needs of UNM staff.

For more information and a list of past winners, visit Jim Davis Staff Council Award.