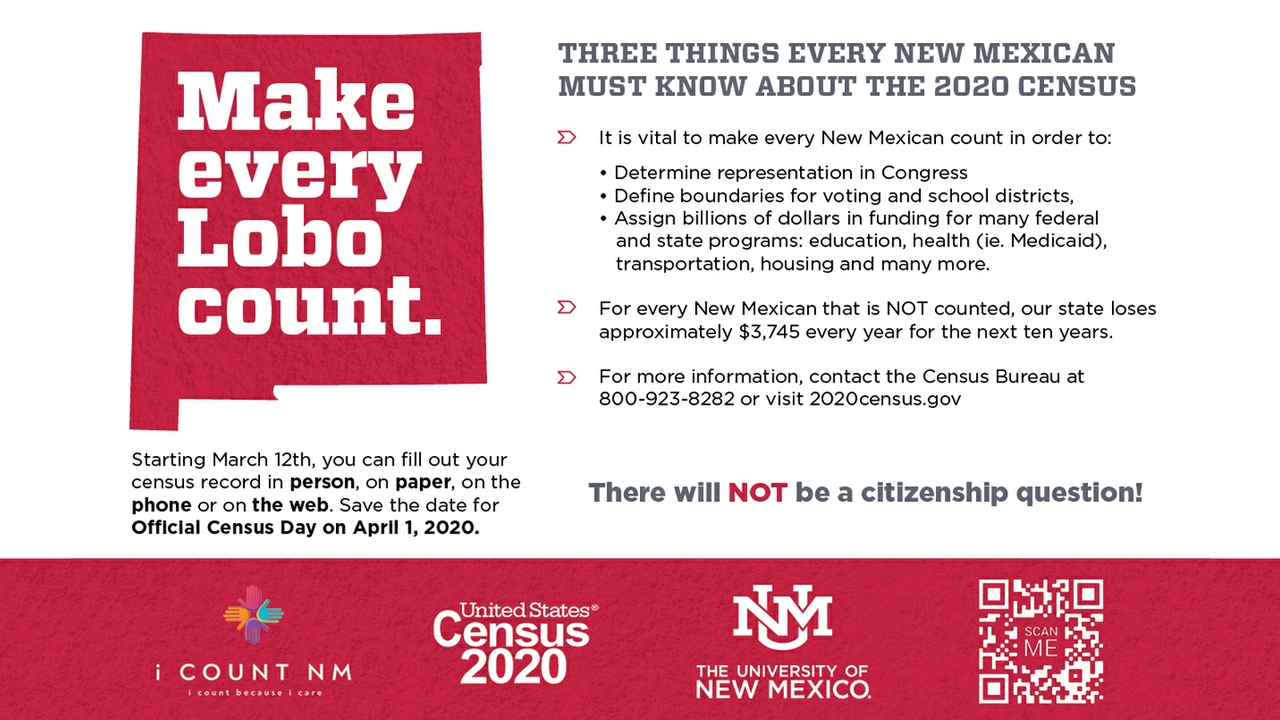 Information on how, when and where college students should be counted
By Rachel Whitt March 30, 2020
Categories: Inside UNM Latest News Division of Equity & Inclusion Geospatial and Population Studies

Amidst the Coronavirus response, the U.S. Census Bureau is making adjustments to ensure people have the time, resources and knowledge to respond to the decennial count. Despite its current period of limited operations, The University of New Mexico remains committed to helping its students understand the process and necessity of being counted.

“Per the Census Bureau’s residence criteria, in most cases students living away from home at school should be counted at school, even if they are temporarily elsewhere due to the COVID-19 pandemic.” – U.S. Census Bureau

The official guidance from the Census Bureau is that students who typically live at school should be counted at school. Despite many students returning home or living with friends, those who typically live in the UNM Dormitories, residence halls and other on-campus housing will continue to be counted through UNM’s Group Quarters Operation.

“In general, students in colleges and universities temporarily closed due to the COVID-19 virus will still be counted as part of this process,” said a recent press release from the U.S. Census Bureau. “Even if they are home on census day, April 1, they should be counted according to the residence criteria which states they should be counted where they live and sleep most of the time.”

Students living in family housing dorm will need to fill out their own census forms. The vast majority of UNM students (80 percent) do not live in campus dorms and residence halls, so they will be counted where they spend the majority of their time. For example if a student rents an apartment in the Albuquerque area but happens to goes home to Phoenix during the COVID-19 crisis, they should be counted as living in Albuquerque even if they are staying with family and friends temporarily. Visit 2020 Census Rumors to fact-check or find answers to additional questions.

According to Census Bureau data, 26.2 percent of Americans have self-reported, including only 18.9 percent of New Mexicans. To help raise awareness of student’s roles in the 2020 Census, the UNM Complete Count Committee is hosting a virtual block party on Zoom. The invite link will be posted at race.unm.edu under “events” as well as the UNM events Calendar). The event, scheduled for Wednesday, April 15 from 11 a.m. to 1 p.m., will include

In order to be entered in the raffle, participants must take and upload a screen shot of their completed commitment card indicating that they pledge to speak to 5-10 participants about the urgency of a complete count for New Mexico, and share the card on their social media accounts. This is an effort to ensure people are spreading the word about their involvement and encourage others to take part in the count.

Everyone can fill out their census online by visiting: my2020census.gov. It can also be completed via phone or by filling out a physical copy. As a last resort, the Census Bureau will send enumerators to any households that do not complete the Census. At this point, all efforts for a complete count end August 14, 2020.

“The public is strongly encouraged to respond to the 2020 Census online using a desktop computer, laptop, smartphone, or tablet, and can also respond by phone or mail,” said U.S. Census Bureau Director Steven Dillingham. “Everyone should respond to the 2020 Census as soon as they receive their invitation — and when they’re finished, they can make sure their friends, families and social networks know about the importance of responding.”

In addition to reiterating how college students will get counted, the Census Bureau is postponing the start of its Mobile Questionnaire Assistance program. Whereas it was going to launch March 30, it will now go live on April 13. The Early Nonresponse Follow-up operation is also being delayed from April 9 to April 23.