Hosted by the UNM Department of Music and the Robb Musical Trust, the Composers’ Symposium is a festival of contemporary music. It has been and continues to be one of the central contemporary music events in the U.S. Southwest bringing international composers and performers to the UNM campus for concerts, seminars, master classes, and public talks. 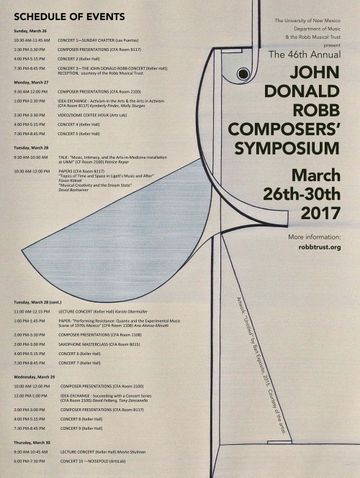 This year, 47 composers, 20 soloists and nine ensembles will participate in the nearly weeklong event. More than 350 composers from around the globe submitted 1,000+ pieces to be considered for performance. The UNM Music faculty helped make the choices. A few of the special guests include Iridium Quartet, Anne Harley and Barbara Pöschl-Edrich. Concerts will be held daily at 4 and 7:30 p.m.

Additionally, the 2016 Robb Commission Competition winning work by Marta Gentilucci will be performed as part of a Chatter Concert at Las Puertas on Sunday, March 26 at 10:30 a.m. For tickets, visit Chatter Concert.

The numerous concerts and events are all made free to the public, making the Symposium an inclusive listening opportunity that welcomes in audiences and serves them entirely new sonic experiences as well as showcasing the talents of UNM faculty and students alongside national and international guest artists. 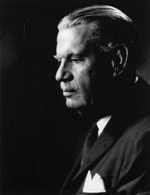 John Donald Robb (1892-1989) led a rich and varied life as an attorney, composer, arts educator, and folk song collector and preservationist. He composed an impressive body of work including symphonies, concertos, sonatas, chamber and other instrumental music, choral works, songs, and arrangements of folk songs, two operas, including Little Jo, a musical comedy, Joy Comes to Deadhorse, and more than 65 electronic works.

The Mission of the Trust, in collaboration with UNM, is to support the music and musical legacy of John Donald Robb, to further his inspiring commitment to education, and to advance the understanding of music of the Southwest. For more, visit John Donald Robb.

For more information on the Composers Symposium, visit robbtrust.org.