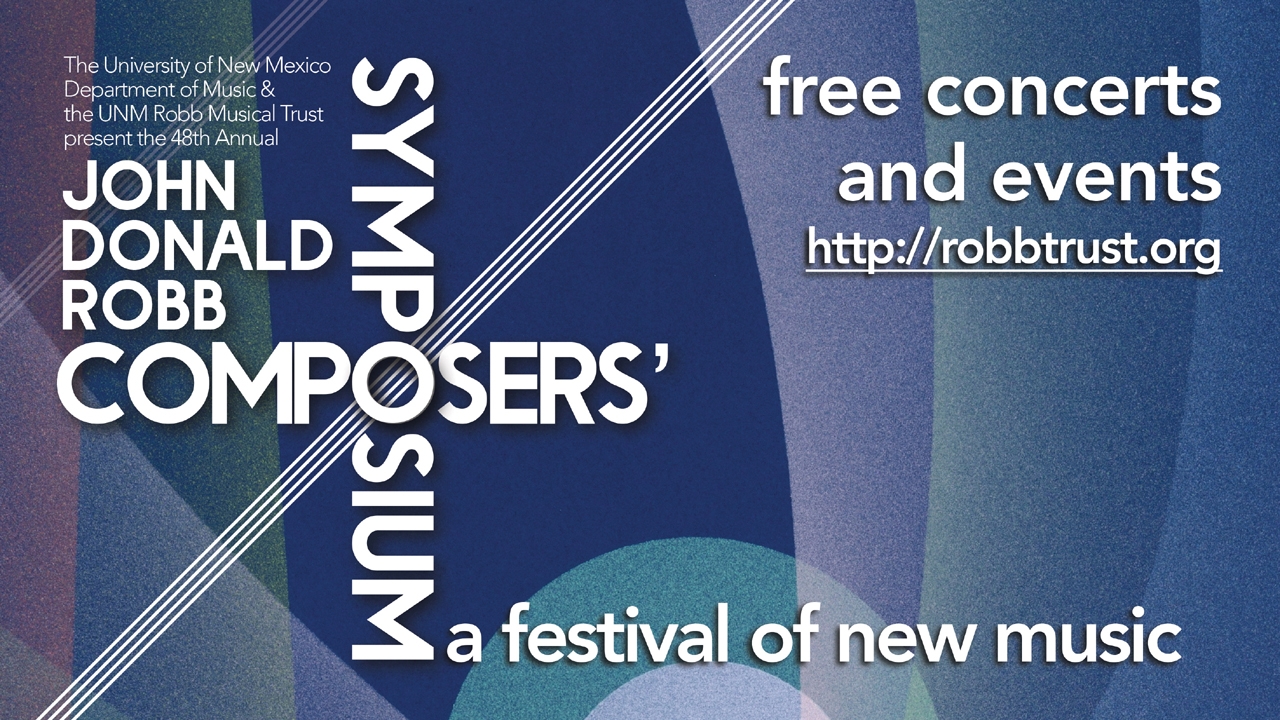 Since 2013, Co-Artistic Directors Karola Obermüller and Peter Gilbert, who joined the University of New Mexico Music Department in 2010 to teach composition and soon took over running the Symposium from its long-time director Chris Shultis, have striven to turn this music festival into a diverse and inclusive endeavor that serves the UNM community of students, faculty, and staff as much as the residents of New Mexico. All concerts and events are free and open to the public. 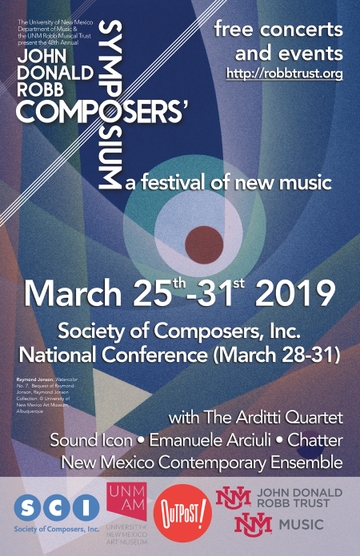 The 2019 Symposium will present works by more than 70 national and international composers including the 2018 John Donald Robb Commission Competition winner, Kyong Mee Choi. The composer, organist, painter, and visual artist is the recipient of numerous international prizes and honors and is currently Associate Professor of Music Composition at Roosevelt University’s Chicago College of Performing Arts.

Included on the program are UNM student composers as well as UNM faculty. Popular local groups such as Chatter ABQ, New Mexico Contemporary Ensemble, and a variety of UNM ensembles and faculty and student performers round out the program.

The Arditti Quartet enjoys a world-wide reputation for their spirited and technically refined interpretations of contemporary and earlier 20th century music. Many hundreds of string quartets and other chamber works have been written for the ensemble since its foundation by first violinist Irvine Arditti in 1974. Many of these works have left a permanent mark on 20th century repertoire and have given the Arditti Quartet a firm place in music history. World premieres of quartets by composers such as Adès, Andriessen, Birtwistle, Britten, Cage, Carter, Czernowin, Dinescu, Estrada, Ferneyhough, Fujikura, Gubaidulina, Guerrero, Harvey, Hosokawa, Kagel, Kurtag, Lachenmann, Liang, Ligeti, Lim, Maderna, Menezes, Mundry, Nancarrow, Neuwirth, Paredes, Rihm, Saunders, Scelsi, Sciarrino, Sierra, Stockhausen, Vazquez, Walshe and Xenakis and more, show the wide range of music in the Arditti Quartet’s repertoire.

Sound Icon is a Boston-based sinfonietta committed to world-class performances of the most compelling music of the past few decades. As one of only a few American ensembles performing large-scale, avant-garde works, Sound Icon has emerged as a leader in its field, regularly working with the most prominent composers and performers of today. Sound Icon’s pursuits are rooted in the belief that live performances of progressive music should provide an experience unlike any other, and that novel, masterful music continues to be produced by today’s composers.

Led by conductor and artistic director Jeffrey Means, Sound Icon has quickly become established as a leading artistic force in Boston, performing challenging, cutting-edge contemporary repertoire for sinfonietta that is rarely heard live in the United States. Sound Icon has worked with prominent composers such as Pierluigi Billone, Liza Lim, Salvatore Sciarrino and has performed major works by numerous leading composers, including Olga Neuwirth, Wolfgang Rihm and many others.