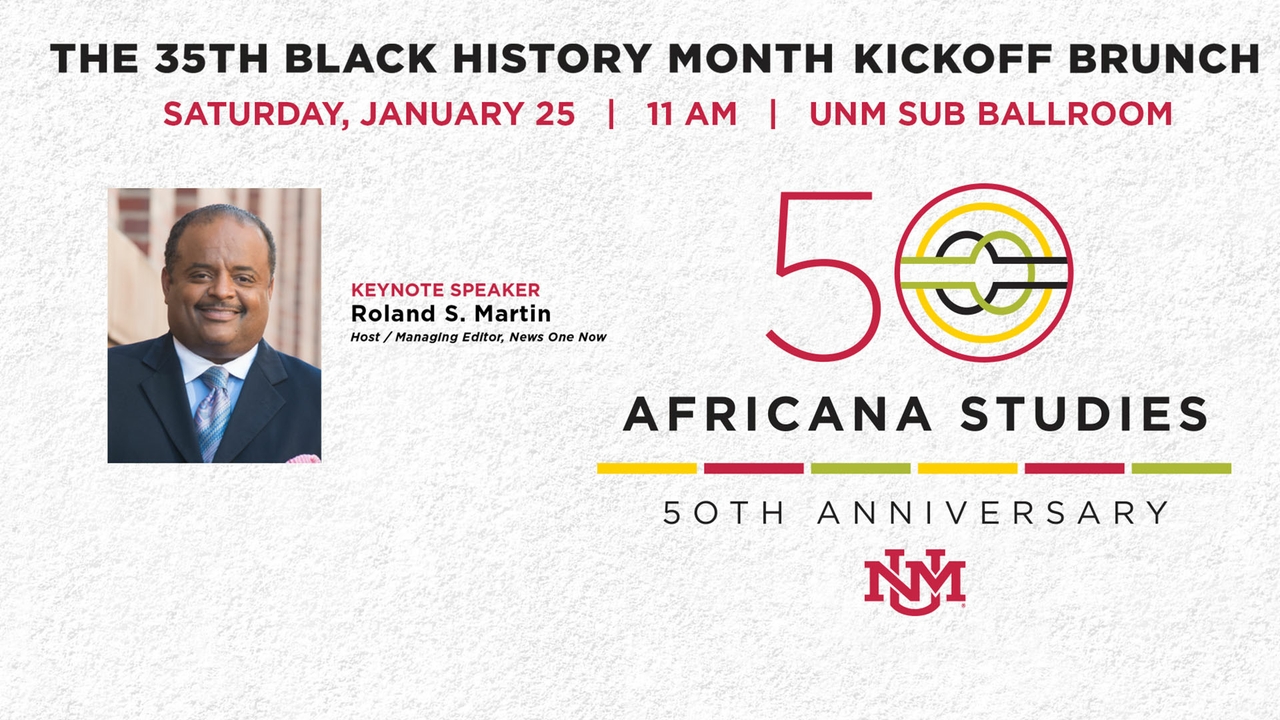 The University of New Mexico's Africana Studies program marks its 50th anniversary with a line-up of events, starting with a Black History Month Kickoff Brunch featuring well-known journalist Roland Martin. The event is set for Saturday, Jan. 25 at 11 a.m. in the UNM Sub Ballroom.

The program has evolved over the years, noted Africana Studies Director Charles Becknell, who earned his bachelor’s degree in Africana American Studies from UNM, his Ph.D. from the College of Education, and a post-doctoral Diversity Fellowship at the UNM Division for Equity and Inclusion.

Becknell’s own experience at UNM has reflected the evolution of Black studies. UNM’s program began as the Afro Studies program, which sprang from the Black Power movement of the 1960s and ‘70s. His father, Charles Becknell Sr., is the founding director. In the 1980s Black studies matured into an established academic discipline and the program changed its name to African American Studies. Scholars and practitioners started examining the term “African American” and argued that it didn’t cover the full experience of African-descended people throughout the Black diaspora, he explained.

The program eventually became Africana Studies, which encompasses the range of African-descended people in the United States, Africa, Latin America, and the rest of the world. Unlike Native American and Chicano/Chicana studies at UNM, Africana Studies is the only ethnic studies unit that has not been transitioned into a full-fledged department, Becknell said, but he hopes to eventually reach that goal.

The Africana Studies program new motto is “Academic excellence and social responsibility.” Its mission “uses a critical Africana philosophy and worldview to investigate African descended peoples' experiences from the perspective of their interests, aspirations, possibilities and envisioned destinies.” The program’s vision is to give “students of all races, ethnicities, and backgrounds a full understanding of the global linkages between peoples of Africa and other African descended people in the Southwest, the contiguous United States and throughout the Black diaspora.”

Events celebrating Black History and the Africana Studies golden anniversary start with the 35th Black History Month Kickoff Brunch on Saturday, Jan. 25, in the SUB ballroom. Featured speaker is journalist, author, and TV and online show host Roland Martin. Also at the event, the Africana Studies Student of the Year, Faculty of the Year, and Community Person of the Year will be announced. Tickets are $50 and are available at UNMTickets.com. Anyone interested in table sales or sponsorships can contact Beth Glenn at 505-277-5644 or at bglenn@unm.edu. Hashtag for the event is #BlackStudiesat50.

To highlight Africana Studies evolution through its 50 years, the program will be dropping a series of playlists that will encompass jazz, soul, R&B, rock, hip-hop, genres from the diaspora, world music, and other music from African-descended people. The playlists will be available from Spotify and Apple Music.

For Women’s History Month in March, Becknell said the program would host photographer Yagazie Emezi. A native of Nigeria, Emezi is a UNM graduate with a degree in cultural anthropology and Africana Studies. She is now based in Africa where she is a professional photographer, the first African woman photographer to be featured in National Geographic.

Becknell said Emezi is an inspiration to young African American girls and is an example of the opportunities and value of having a degree from the UNM Africana Studies program.

In April, the program will host the inaugural Southwest Conference on Black Studies, which should be a big event, Becknell said. Although he expects primarily students and scholars from the southwest United States, the conference has already had applications from as far away as Africa and Latin America. Special guest will be Amilcar Shabazz, a professor at the University of Massachusetts and president of The National Council for Black Studies, the leading organization of Black Studies professionals in the world. The conference, themed, "Assessing the Landscape, Countering the Anti-Black Narrative, and Advancing the Discipline," is scheduled to run from April 29 to May 2. The conference will wrap up with a live performance by three-time Grammy Award-winning group Sounds of Blackness.

“Throughout the conference, we hope to reinforce the founding pillars of the discipline and reflect on our long-standing commitment to academic excellence and social responsibility. We welcome paper and panel workshop proposals and abstracts with a focus on the southwest are particularly encouraged,” Becknell said. Also at the conference, the Africana Studies Program will recognize students responsible for establishing Black Studies at UNM, Afro-Studies Summer Youth Program participants, program Alumni, past program directors and 2020 Africana Studies graduates.

Details on submitting papers and proposals are here. There will also be an undergraduate student essay competition, with cash prizes for the winners. Registration details are here. Hashtag for the event is #scbs2020.

In June, 16 people will travel to Ghana, West Africa, for a three-week tour hosted by the Africana Studies program. This trip is designed for participants to meet and get to know the people of the cities, towns, and villages of Accra, Elmina, Cape Coast, Kumasi and others in their communities. visit the Cape Coast and Elmina slave castles, and Black Star Square. Students will also visit the W.E.B. Dubois Research Center in Accra to explore Ghana’s participation in slavery, fight against colonialism, and the quest for independence.

Details for the Ghana trip and other Africana Studies events and activities are available on the program website.