UNM School of Law Professor Alex Ritchie studies and seeks solutions to complex oil and gas legal issues, not only in the classroom, but also in his scholarship. His reasoned analysis on why New Mexico state law preempts a complete ban by a local government on oil and gas production featured prominently in a ruling last week by U.S. District Judge James O. Browning that struck down Mora County’s “community rights” oil and gas ordinance. Because similar ordinances have been enacted throughout the country, the holding could have important implications for cases in other states.

David J. Herring, dean, UNM School of Law, said, “Professor Ritchie’s analysis of this issue is an outstanding example of the engaged scholarship that the School of Law faculty produce on a regular basis. This is true of his work in the area of oil and gas law. He is becoming a leader in the field who assists those in thinking about what are some very complex issues. I am thrilled that Judge Browning found Professor Ritchie’s insights useful in making his decision in this very important case.”

Federal district court ruling relies on Ritchie’s analysis
The ruling was described in the news as the first significant federal court consideration of local drilling bans. In the 199-page opinion, Browning cited and quoted Ritchie’s analysis several times. The analysis appeared in an article published in the UNM School of Law's Natural Resources Journal, and appeared to settle the state law issue for Judge Browning: “Moreover, the Ordinance’s ban conflicts with state law by creating waste and not recognizing correlative property rights, which the Oil and Gas Act prohibits. As the University of New Mexico School of Law’s oil-and-gas professor, Alex Ritchie, explains…” The opinion then cited a three-paragraph, 365-word selection from Ritchie’s article.

The opinion is extremely long in part because Judge Browning considered a number of federal Constitutional questions, including those of federal law supremacy, equal protection and due process. “I believe the most important issue in the opinion for the oil and gas industry and for the state as a whole, which heavily relies on tax revenue from oil and gas production, was the extent to which New Mexico law allows a local government to regulate oil and gas operations in conflict with state interests,” Ritchie said.

Ritchie explained that under the rationale of the opinion, local governments may regulate certain oil and gas activities as long as they don’t go too far. “The court does not answer the question where the line must be drawn, which leaves to another day and another case whether restrictive ordinances like the Santa Fe County ordinance may coexist with state oil and gas laws,” he observed.

EnergyWire, a leading news publication about the transformation of the energy sector, explores the implications of Browning’s decision. “Hydraulic Fracking: Scrapped drilling ban leaves open window for local rules,” by Ellen M. Gilmer and Mike Lee, highlights the struggle over local control and the “successful failure” motivation of the county and the special interest group that pushed Mora County to adopt the ordinance. The authors quote Ritchie a number of times in the news article.

Judge Browning also cited an article in the Natural Resources Journal by a former UNM School of Law student, Jonas Armstrong, titled, “What the Frack Can We Do? Suggestions for Local Regulation of Hydraulic Fracturing in New Mexico.” 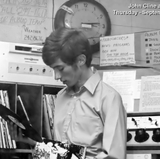