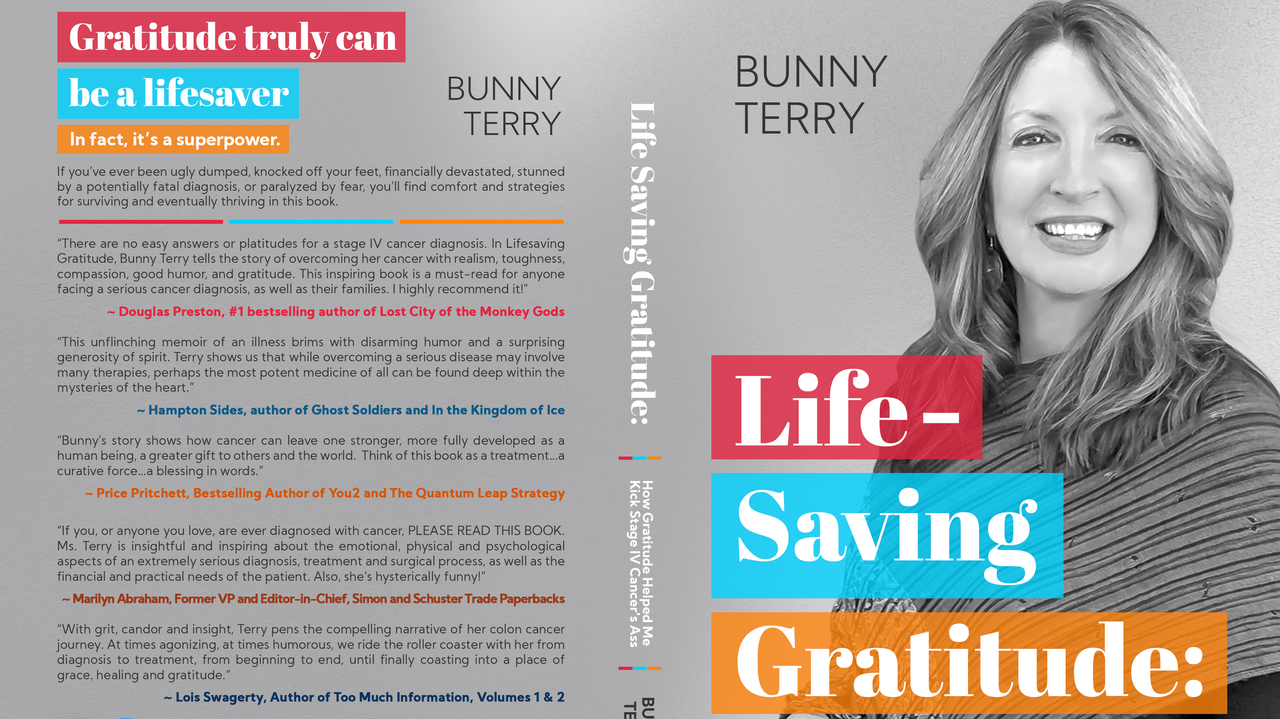 "A book of uncommon transparency with grit and candor, needles and chemo, hair loss and laughter and a lot of surprising humor." 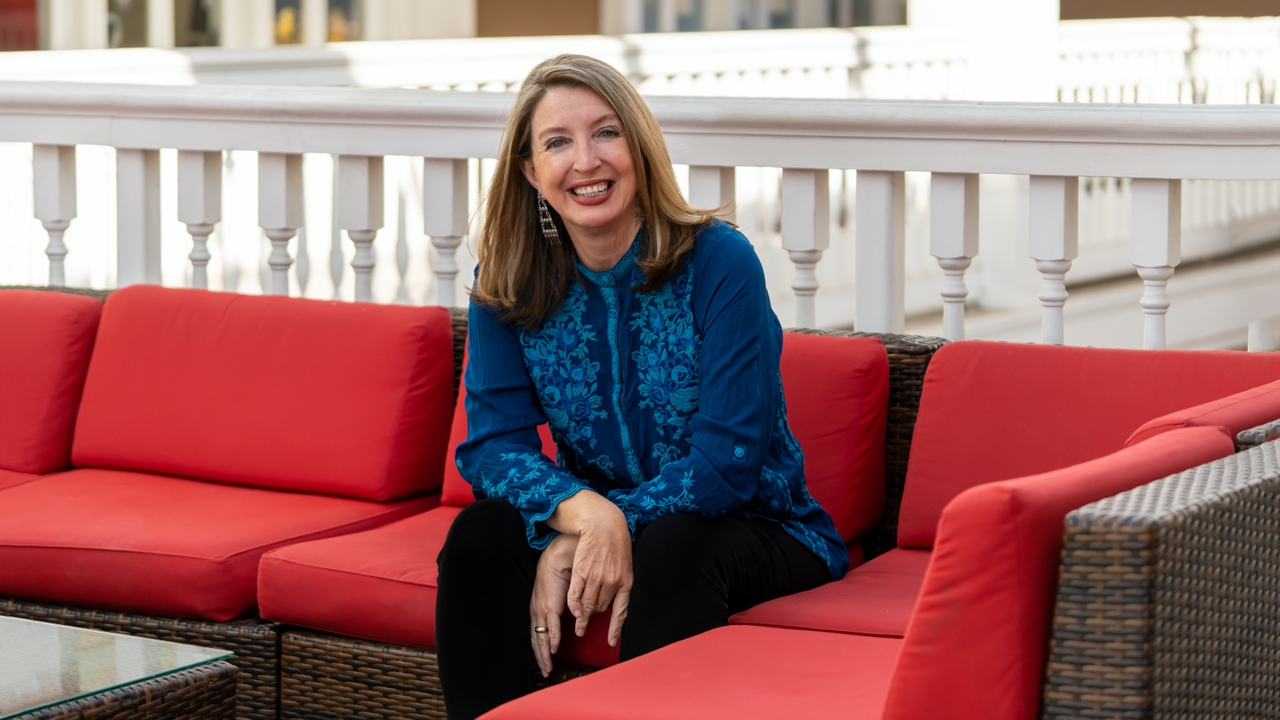 The power of sharing stories

Bunny Terry's book is about hope; hope that can help calm the fears of even one person about to embark upon a daunting journey. 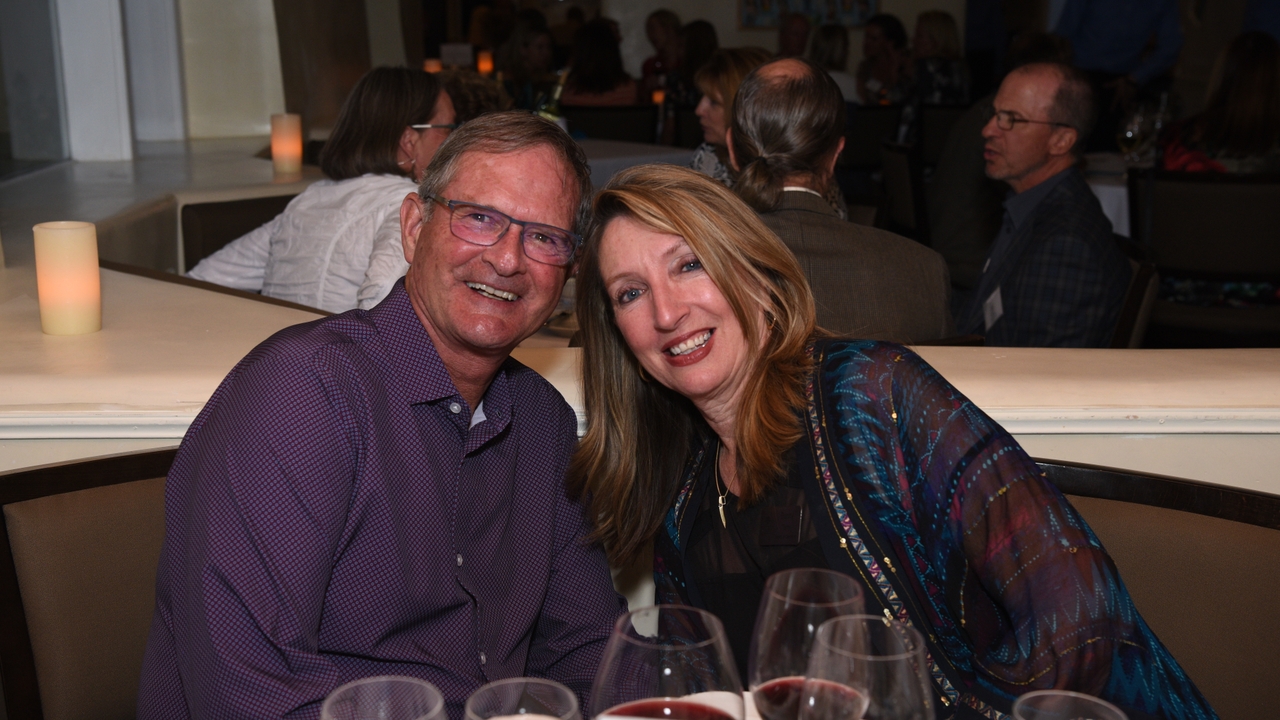 in those who enrich our lives and make us stronger each and every day.

“Life-Saving Gratitude” is what alumna Bunny Terry says helped her through some of her darkest days as she battled stage four colon cancer; it’s also the title of her first self-published book in which she shares her surprisingly upbeat story.

“Gratitude truly can be a lifesaver. In fact, it’s a superpower,” Terry said.

A Class of 2000 graduate of UNM, this New Mexico native and mother of two moved herself to Santa Fe in 2012. After raising her kids in Albuquerque and Logan, she was ready, at 51, to start a new life. 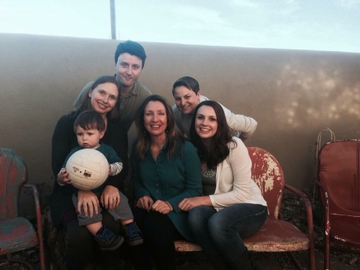 “I needed to make a move in my life that was just for me,” she said. “I packed up all my things, sold my house in Logan and moved to Santa Fe. I was single and in good shape. Honestly, I felt like a million bucks.”

A couple of months after the move, Terry said she had one evening of pain in her abdomen that she brushed off as a bad case of the flu. That pain ended with a trip to urgent care and then the emergency room where she was originally diagnosed with appendicitis. After a CT scan, doctors found a 5.5-centimeter tumor that had perforated her colon wall. A second 4.5-centimeter tumor was attached to her liver. A doctor told Terry she was bleeding to death.

“During the colonoscopy my first day in the hospital, I was half awake and watching the procedure on a screen, and all I remember is hearing the doctor say, ‘I have been doing this for 17 years and I know cancer when I see it.’ Then, I passed out,” Terry said. “After learning I had stage four colon cancer, I didn’t even know what it meant, I just knew there was not a stage five.”

Less than a year after her diagnosis, which started with chemo, included an out-of-state surgery to remove the two tumors and additional rounds of chemo, doctors declared Terry cancer free.

“I remember waking up the day after my diagnosis, thinking they couldn’t be talking about me,” she said. “I was so surprised that I was the one who was sick. I thought I was the healthiest person I knew. But the cancer changed my life.”

Terry says she always found solace in the art of writing, so much so that she commits to writing 1,000 words each day.

“At the end of that cancer year, I had all these words and I kept thinking, this may be something that someone else can benefit from,” she said.

After years of rigorous edits and re-writes, those 365,000 words were honed into Terry’s newly published book, “Life-Saving Gratitude.” It’s a book of uncommon transparency with grit and candor, needles and chemo, hair loss and laughter and a lot of surprising humor.

“This is a book about hope. Cancer feels like complete destruction of your life when you hear the word. But this is a book about only taking on the hurdle that’s right in front of you and devoting yourself to knowing what you’re grateful for,” she said.

“I’m not saying it will work for everyone. I’m only an expert on myself,” she said. “Just trying to remember a minimum of five things I was grateful for, especially the days I had treatment, became the theme of my life. It’s the recurring theme in the book. Staying determined to remind myself what I was grateful for, along with the support of this crazy community, was the only thing that kept me from going crazy at the time.” 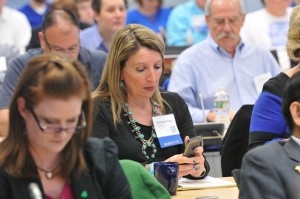 In 2014, Terry became an advocate for other cancer patients through Fight Colorectal Cancer. She lobbied in Washington, D.C., asking Congress to make changes in regard to early screening and detection of colon cancer. It’s then, she said, where she found her “big why.”

“I needed help making sense of why other people around me were losing their battle to cancer, but I was surviving. One of the emotions I was battling was guilt, guilt for surviving,” she said. “I attended ‘Call on Congress’ through Fight Colorectal Cancer. We all shared our stories with one another, and someone came up to me and said, ‘There is so much power in you sharing your story,’ and I thought, ‘That’s it. That’s my reason.’ That’s how I make sense of why I survived.”

She now serves as vice chair of the Cancer Foundation for New Mexico, an organization devoted to helping northern New Mexicans get to their cancer treatments by providing basic services such as grocery cards, overnight stays and mileage reimbursements.

Terry said if the book can help calm the fears of even one person about to embark upon this daunting journey, then she knows it was all worth it.

“There is so much power in all of our stories, but if we don’t tell them, we’re taking for granted the power of sharing who we are with others. Stories can save us,” Terry said.

Life-Saving Gratitude is available in paperback, audio, or as an e-book on Amazon.