While the Mars' Rovers continue to scour the surface of the Red Planet snapping pictures, zapping rocks and looking at any other clues about its composition, researchers at the University of New Mexico's Institute of Meteoritics have made what could be a once in a lifetime discovery right here on Earth involving a rock delivered by an interplanetary free-ride from Mars. 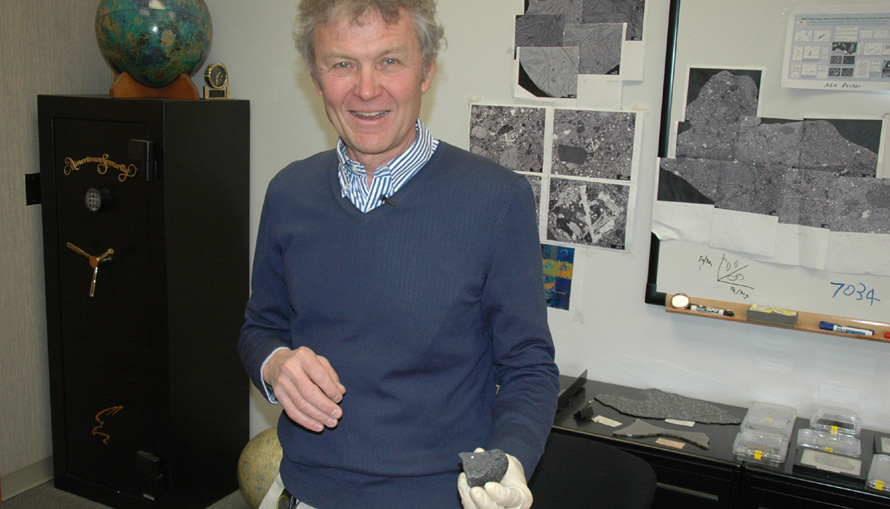 Carl Agee, director and curator, UNM’s Institute of Meteoritics, and a team of researchers, identified a new class of Martian meteorite that fell to Earth and likely originated from the planet’s crust and surface environment. Photo credit: Steve Carr

Led by Carl Agee, director and curator, University of New Mexico's Institute of Meteoritics in Albuquerque, a team of researchers, including groups at UC San Diego and the Carnegie Institution, have identified a new class of Martian meteorite that fell to Earth and likely originated from the planet's crust and surface environment.

The meteorite, Northwest Africa (NWA) 7034, nicknamed "Black Beauty," is nearly 320 grams in weight and was found in the Saharan Desert in 2011. Now after more than a year of intensive study, Agee's assembled team has determined that the meteorite formed 2.1 billion years ago, the early era of the most recent geologic epoch on Mars called the Amazonian. Additionally, the meteorite, found to contain an order of magnitude more water (10x's) than any other Martian meteorite, is a nearly perfect match for surface rocks and outcrops that NASA's missions have studied by remote sensing.

The research, supported by NASA's Cosmochemistry Program and Astrobiology Institute, the New Mexico Space Grant Consortium and the National Science Foundation, was published in the January 3, 2013 issue of Science Express.

"This meteorite is unlike anything I've ever seen before," said Agee, who is also a professor in the Department of Earth and Planetary Sciences at UNM and an expert in the field who has spent much of his career studying meteorites. "It's a completely new type of Martian meteorite. It has everything in its composition that you'd want in order to further our understanding of the Red Planet. This unique Martian meteorite tells us what volcanism was like 2 billion years ago, but it also gives us a glimpse of ancient surface and environmental conditions on Mars that no other meteorite has offered." 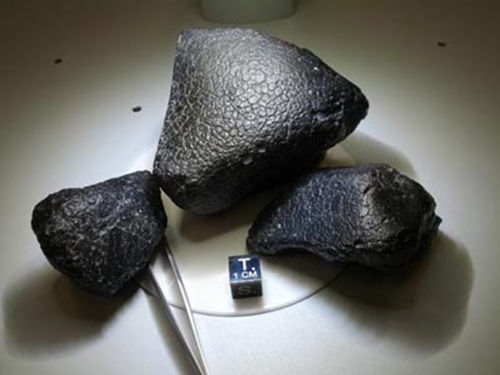 At the Carnegie Institution, researchers Andrew Steele, Marilyn Fogel, Roxane Bowden and Mihaela Glamoclija, studied carbon in the meteorite and discovered that organic carbon (macromolecular) similar to that seen in other Martian meteorites is also found in this meteorite.

"This meteorite, made of brecciated volcanic rock, is consistent with the composition of surface rocks on Mars analyzed by Martian rovers and orbiters," said Agee. "But, our analysis of the oxygen isotopes, oxygen atoms with different numbers of neutrons, shows that NWA 7034 is not like any other meteorites or planetary samples. The chemistry is consistent with surface rocks that have interacted with the Martian atmosphere, an idea that had been hypothesized by earlier studies. The abundance of water, some 6,000 parts per million, suggests that the meteorite interacted with Martian surface- or ground-water 2.1 billion years ago."

The unique meteorite has some similarities to, but is very different from other Martian meteorites known as SNC (for three members of the group: Shergotty, Nakhla and Chassigny). SNC meteorites currently number 110. So far, they are the only meteoritic samples from Mars that scientists have been able to study in Earth-based laboratories. However, their point of origin on the Red Planet is uncertain. In fact, recent data from lander and orbiter missions suggest that they are a mismatch for the Martian crust.

"The texture of the NWA meteorite is not like any of the SNC meteorites," explained Steele, who led the carbon analysis at the Carnegie Institution's Geophysical Laboratory. "It is made of cemented fragments of basalt, rock that forms from rapidly cooled lava, dominated with feldspar and pyroxene, most likely from volcanic activity. This composition is common for lunar samples, but not from other Martian meteorites."

The meteorite will undoubtedly provide additional clues about Mars' warm, wet past and its present cold, dry state as researchers at UNM and others continue to examine the rare rock.

"Perhaps most exciting, is that the high water content could mean there was an interaction of the rocks with surface water either from volcanic magma, or from fluids from impacting comets during that time," said Steele. "It is the richest Martian meteorite geochemically and further analyses are bound to unleash more surprises."

"For me personally, this is a once in a career discovery. You try to do high-quality science, you do good work, persevere, but once in a while, you just get lucky," said Agee.