A recent survey of students at The University of New Mexico shows a majority of students believe UNM is doing a good job of educating, preventing and responding to sexual misconduct and assault. However, University leaders recognize more work needs to be done and plan to use the survey results to target future outreach and education efforts.

The assessment, done by National Campus Climate Survey (NCCS), found nearly 82 percent of students believe UNM takes sexual misconduct complaints seriously. Almost 78 percent said the school is educating students about this issue, and more than 66 percent believe the University is performing well in efforts to prevent sexual assault. About 75 percent of the respondents said UNM is doing a good job of providing services to those who have experienced sexual assault.

The survey also found nearly 65 percent of students are aware of school policy regarding sexual misconduct, and about half of them said they know where to go to get help on campus.

“While we are pleased that many students recognize our efforts to reduce sexual assault, we will continue working to get the message out to the whole campus community,” President Bob Frank said. “These results will help us focus on those who may not know how to report or how to get help. Protecting the Pack means reaching 100 percent of our students!"

The NCCS was conducted over a six-week period at the end of the spring 2016 semester. It meets state and federal requirements, and provides scientifically rigorous results to show a statistically accurate representation of how UNM students feel about misconduct of a sexual nature, including harassment, assault, and intimate partner violence. Nearly 30 percent of the 10,000 students contacted participated.

“We are pleased to get such a good response rate,” Francie Cordova, Director of the Office of Equal Opportunity (OEO) which contracted the survey. “It’s a chance to hear from our own students, find out what they know and don’t know about sexual violence. We can use this information as a baseline to gauge our effectiveness in training and educating our campus as we move forward.”

The survey asked questions about sexual activity, then breaks down responses into specific types of sex and whether it or not it was consensual. While about 27 percent of students said they had experienced non-consensual vaginal sex, or rape, over their lifetime, the number fell to 9 percent during enrollment at UNM. Only 41 percent of the respondents said they had told someone about a nonconsensual sexual incident, and only 5 percent made an official report if it happened off campus. Sixty percent of those who did not report the incident said they did not think it was serious enough to report.

UNM’s Title IX Coordinator Heather Cowan said without a report, her team can’t take action, so they will be stepping up outreach efforts to encourage reporting.

“We’re especially concerned about the students who have experienced sexual violence but haven’t told anyone else about it; those students are dealing with this potential trauma alone,” said Cowan. “We want our Lobos to get any help they need, whether or not they make an official report to the university.”

While the problem is daunting, UNM’s survey results are promising when compared to similar questions in a survey of the Association of American Universities (AAU) last year. (UNM is not a member of AAU.) That survey of 150,000 students at 27 public and private universities, including most of the Ivy League, drew a smaller response rate of less than 20 percent. It found that only 24 percent were aware of school policy, less than 30 percent believe their school took complaints seriously, just over 63 percent felt their university responded fairly, and fewer than half felt their school was doing a good job of educating students on the issue. 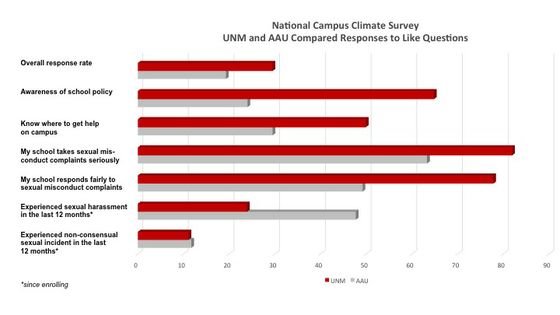 The UNM survey highlights a few areas of particular concern. For instance, it found that 23 percent of students reported experiencing intimate partner violence in the past 12 months. University leaders plan to take a close look at the findings to gauge why certain groups might be at higher risk and how to reduce it with additional training or resources. One outreach that appears to be gaining momentum at UNM is students stepping in to prevent sexual misconduct. 65 percent of the respondents indicated they had participated in bystander intervention.

“We plan to carefully analyze this report to help us focus our work as UNM continues to address this serious issue,” Frank said “Sexual misconduct won’t just go away, and it has a terrible social and emotional cost. Tough as it is, I’m glad we are united in our resolve to improve.”