For nearly two decades, University of New Mexico Leslie Spier Distinguished Professor of Anthropology Lawrence G. Straus, his colleague Manuel R. Gonzalez Morales from the University of Cantabria and their students have spent part of every summer in Spain, in a cave that once held penned goats. They have been searching for a glimpse of the inhabitants who lived in this part of the world between 40 and 3,000 years ago.

The “Journal of Archeological Science,” one of the leading archeological journals in the world has just devoted an entire special issue to their most spectacular find. The issue features “The Red Lady of El Mirón: Magdalenian Human Burial in Cantabrian, Spain,” a detailed examination of the remains of a woman ceremonially buried 19,000 years ago.

The research group calls her the Red Lady of El Mirón because her body and bones as well as the burial layer sediments were carefully coated with red ochre that contained sparkling hematite crystals. The Red Lady was 35 to 40 years old, of average stature, apparently healthy and relatively strong. Straus doesn’t know what made her special, but her burial is highly unusual.

This is the only burial ever found in the Iberian Peninsula from the Magdalenian age, although several burials of this age have been found in France, Poland, Italy and other parts of Europe. 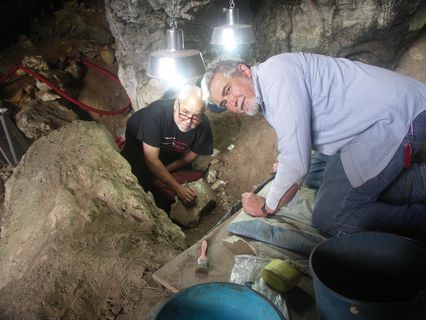 In addition to coating her with a mineralogically distinctive ocher which can only be found 25 kilometers away, her community buried her behind a huge boulder in El Mirón cave.

“A sheer surface of the rock that had fallen from the ceiling came to rest at about a 40 degree angle facing the mouth of the cave such that it is lit directly by the sun at the end of the afternoon, and the Magdalenian people engraved that surface,” said Straus.

One group of engravings is shaped like a V. González Morales has interpreted that as a possible vulva or pubic triangle. Straus says they are unable to say for sure whether the engravings are a kind of grave marker, but the engraving was done at about the same time as the burial, since the block had fallen shortly before and the engravings were covered over by cultural fill shortly after the burial took place, all of which is certified by radiocarbon dating.

Several of the articles in the special JAS issue explore what the Red Lady ate during her life. From the associated fauna, from stable isotopes, from wear on her teeth and from dental calculus, specialists determined that she ate red deer, ibex, salmon, seeds, and mushrooms. They also found pine residue, although that may have come from sitting around smoky fires fueled by pine wood, just about the only trees present in the region during the last ice age.

At some point after she died, a wolf dug up a leg bone and gnawed it. By that time all the flesh was gone. The researchers theorize that the wolf was interrupted because only one bone showed teeth marks. They know someone put additional red ocher on this tibia and on the lower jaw and reburied them. Some of the large bones, including the cranium from the Red Lady are missing and Straus said they may have been removed for some ritual purpose. 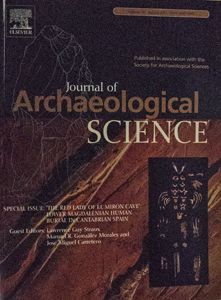 Straus and González Morales discovered the Red Lady in 2011, and since then have worked with their students to remove the bones and analyze them and the associated artifacts and contextual information, together with specialists from Spain, Germany and the U.S.

They have followed every clue to find out as much as possible about the way she and her community lived, and this special issue of the journal gathers their research in one place. The team has been able to answer many of the questions about how she lived, but they are still unable to say why she was so special to her community or why she was buried with such careful ceremony. That part, said Straus, remains a mystery.

The discovery is also the subject of an article in the fall edition of the popular Archaeology Magazine.

Straus is an internationally renowned expert on Paleolithic prehistory, and editor of the Journal of Anthropological Research at UNM since 1975.