Victoria Bowler and Milena Carvalho both arrived last fall at The University of New Mexico excited to begin graduate work in the Department of Anthropology.

Bowler had been a U.S. Park Service ranger at sites throughout the southwest and was ready to do the academic work she needs to continue her career. Carvalho is finishing her Master’s degree and plans to go on for a Ph.D. They share an advisor, Emily Jones, an assistant professor in the Department of Anthropology, who pushed them to apply for the fellowships. They quickly became friends.

“NSF typically only awards ten of these fellowships to archaeologists out of the thousands of archaeology students who apply,” said Jones. “Despite the low odds, I think applying is well worth it for research-oriented students, as writing the application helps in planning out future research and is good practice for writing other grant applications.”

So Jones encouraged Bowler and Carvalho to apply.

“I didn’t necessarily expect to get this scholarship but it requires that you have a personal statement and a research statement. The application process helped me create my master plan for my degree, and that’s kind of why I was applying for it,” said Bowler.

The NSF fellowships pay living expenses for three years so the student can focus completely on their research. It’s one of the most generous fellowships available to graduate students.

Bowler wants to work in a research area where not much previous work has been done. She wants to know much more about how ancestral pueblo people interacted with dogs. Bowler says there is evidence that prehistoric dogs had roles similar to modern dogs as protectors and pets and sometimes as workers. There is also evidence that dogs were used in ceremonies and rituals and were sometimes sacrificed. She said there are oral studies that show dogs were sometimes thought of as powerful entities and guardians of the afterlife.

Bowler will spend the next few years exploring the relationship between people and dogs, trying to understand the importance of dogs to ancestral Puebloan people. One thing she vividly remembers from her days as a park ranger are the questions tourists would ask about the people who lived in the Gila Cliff Dwellings.

She also wants to know whether the prehistoric dogs were hunting and feeding themselves or whether they ate a diet similar to the humans they lived with. She will work in UNM’s zooarcheology lab, in the Center for Stable Isotopes and with collections of bones in several local repositories. 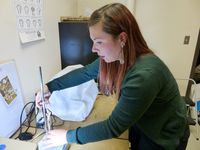 Carvalho came to UNM because she found the specific elements she needed in the various departments. “I needed to find an archaeology program with faculty expertise in zooarchaeology and Paleolithic Iberia, at an institution with a strong biology program and ties to Iberian studies,” she said.

A child of two cultures, born in the United States, in a family that moved back to Brazil when she was very small, she spent the first part of her life growing up in São Paulo speaking Portuguese before her family moved to Michigan. “When I was little, I wanted to be an archaeologist because I saw the movie, “The Mummy” and that was interesting, but I was always interested in cultures and the human past,” Carvalho said. Her questions about her own cultural identify led her to archaeology.

As an undergraduate at the University of Louisville she connected with a scholarship program that gave her a research opportunity to work on the St. Martin of Tours project, an analysis of the remains of two catholic saints. She was fascinated by the amount of information that can be gathered from bones and she began working with a research professor who was exploring a Middle to Upper Paleolithic cave site, Lapa de Picareiro in central Portugal, looking for the remains and material culture of Neanderthals. 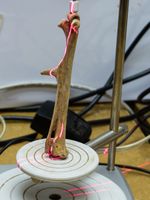 Turkey leg bone being scanned by lasers in 3-D scanner

She has spent part of three summers there and will return to Portugal next summer. “I got into Neanderthals because I was very interested in megafauna – you know, these mammoths that went extinct and it just so happened that the first opportunity I had to do an excavation was at a Paleolithic site that has Neanderthal occupations. We haven’t found any remains yet. Maybe this year.”

In the meantime, she is completing 3D scans of bones for Jones, and learning more about analytical techniques she can use to examine bones from a collection housed at the University of Algarve when she travels to Portugal in the summer.

Carvalho says she will use part of the award to examine a collection of animal bones from El Mirón cave in Spain, where another advisor the Leslie Spier Distinguished Professor of Anthropology Lawrence Straus has spent the last decade excavating remains of a Magdalenian era woman, the Red Lady of El Mirón.

Bowler and Carvalho say one of the best things about the NSF grant is they can support each other through the ups and downs of their research for the next three years, and they have the financial support they need to take them on an academic journey of a lifetime.