The Pillar of Public Service Award recognizes the contribution of an extraordinary leader and innovator in one or more of public television’s three essential public service missions: education, public safety, and civic leadership. 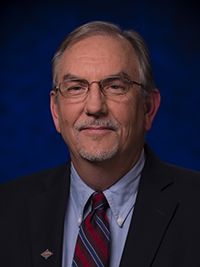 Under Joachim’s leadership, New Mexico PBS has made it possible for hundreds – and ultimately thousands – of students with no or limited Internet access to receive educational resources at home, using a slice of the state public television network’s broadcast spectrum to deliver such material through the airwaves to devices in the home.

This same datacasting technology is also being used to send vital public safety communications to law enforcement officers and first responders throughout New Mexico, including rural and remote areas where cellular service is unavailable.

KRWG Public Media at New Mexico State University in Las Cruces and KENW in Portales are also participating in these education and public safety datacasting initiatives.

And New Mexico PBS in 2021 became the first public television station in the nation to fully convert to the new ATSC 3 Next Gen broadcast standard, creating more channel capacity for local programming and more spectrum capacity for datacasting applications of all kinds.

“Franz Joachim and his talented team at New Mexico PBS have dramatically demonstrated the power of public television to deliver a broad range of essential public services under even the most challenging conditions,” said Patrick Butler, president and chief executive officer of America’s Public Television Stations. “New Mexico is a big State with a small population, and New Mexico PBS has brought them all together when it counts, in partnership with a state government that understands the potential of public television datacasting to serve its people and has invested significant resources to help realize this potential.

“Franz’s leadership in conceiving these extraordinary services and securing this essential funding is an inspiring example for everyone in the public broadcasting system and he has richly earned this Pillar of Public Service award.”

“I am honored and humbled to be receiving this award,” said Joachim. “The Pillar of Public Service award is tribute to the quality of our NMPBS staff and their devotion to our mission of informing, engaging, educating and connecting New Mexicans with services that can be accessed anytime and anywhere.”

Joachim, who has been involved in television production since high school Tucson, Ariz., graduated from the University of Arizona with a degree in Radio-Television and a minor in Electrical Engineering and Mathematics. While there, he worked for KUAT-TV (PBS), first on its student production crew and then as studio supervisor. He has worked in television broadcasting for 45 years as a photographer, editor, director and manager in a variety of production environments, including industrial, news, studio and long-form documentary production. Joachim is a certified diver, shooting documentaries from the Sea of Cortez to the Turks and Caicos and Virgin Islands.

In 1999, Joachim became production & operations manager for KNME-TV in Albuquerque, N.M. In this position, he supervised an extensive build-out of automated on-air operations and developed the digital file based production workflow for KNME production.

Joachim was designated as a National Association of Broadcasters’ DTV spokesman for New Mexico and traveled the region, giving talks on the transition to digital television, showing people how to hook up converter boxes, and explaining the vagaries of the DTV transition.

The 2022 Pillar of Public Service Award was presented to Joachim during the APTS Public Media Summit on Monday, Feb. 28.