"Mensajes del corazón," an exhibit of arpillera-inspired artwork created by fourth grade students at East San Jose Elementary School in Albuquerque, is on display at the UNM Latin American & Iberian Institute. The artwork depicts the students’ concerns for their community and broader global issues such as the dangers of texting while driving, police violence, animal welfare, and immigration policies among others.

Nearly 200 students in the fourth and fifth grades participated in creating the textiles under the guidance of art and literacy teacher Amy Sweet. Over the course of 12 weeks, students studied the history and social context of Chilean arpilleras.

"Projects like these are so important and powerful because they give us the chance to hear directly from the students,” said Sweet.

In developing the project, Sweet drew in part on curriculum which the LAII produced in partnership with the National Hispanic Cultural Center (NHCC) in relation to the NHCC Art Museum’s 2012 exhibit, "Stitching Resistance," which featured an extensive collection of original arpilleras.

“Arpilleras made in Chile between 1973 and 1990 were masterful and significant as non-violent expressions of denunciation, outrage, and opposition,” the NHCC Art Museum wrote at the time of the exhibit. “Post-1990 works show the continuing importance of stitching memory and history into humble cloth scraps. As significant as the works themselves are the artists who created them.”

They also noted, “Arpilleras are a powerful art form. Layers of sackcloth or burlap fabric were joined, principally through applique, to create multi-dimensional—in layers and meaning—works of protest and resistance. Arpillera, the burlap cloth, became the preferred medium for resistance and protest because the material was easily obtained and inexpensive. Appliqué, embroidery, and patchwork were traditional skills of women, the widows and mothers, whose families were destroyed in the months and years following the golpe de estado (a military coup) of September 11, 1973. Their artistry with humble cloth is vibrant testimony—history in textile form, every bit as compelling as any other of the visual media.” 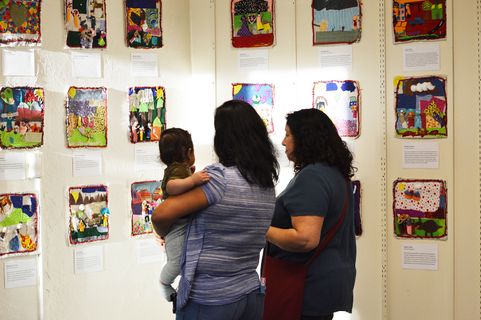 Family members tour the LAII’s gallery filled with the arpillera-inspired artwork. The detail and composition of the works can be simple or intricate. Each one tells a story; each one conveys a message.

Tey Marianna Nunn, director of the NHCC Art Museum and curator of the 2012 exhibit said, “Our Stitching Resistance exhibit was very meaningful for the NHCC and we are thrilled that the history and context of this important art form is being taught in Albuquerque schools. I saw the fourth grade students’ works and they are amazing and poignant- just the way arpilleras should be. The LAII exhibit is very impressive and the artists and teachers should be congratulated.

The LAII is pleased to partner with the school in order to exhibit these "mensajes del corazón" and to acknowledge the students' tremendous creativity and thoughtfulness.

“The LAII was excited for the opportunity to support the work of Sweet and her students. What better way to encourage civic engagement among our young people than by creating a space in which their voices can be shared with the broader community,” said Keira Philipp-Schnurer, supervisor of Community Education Programs at the LAII.