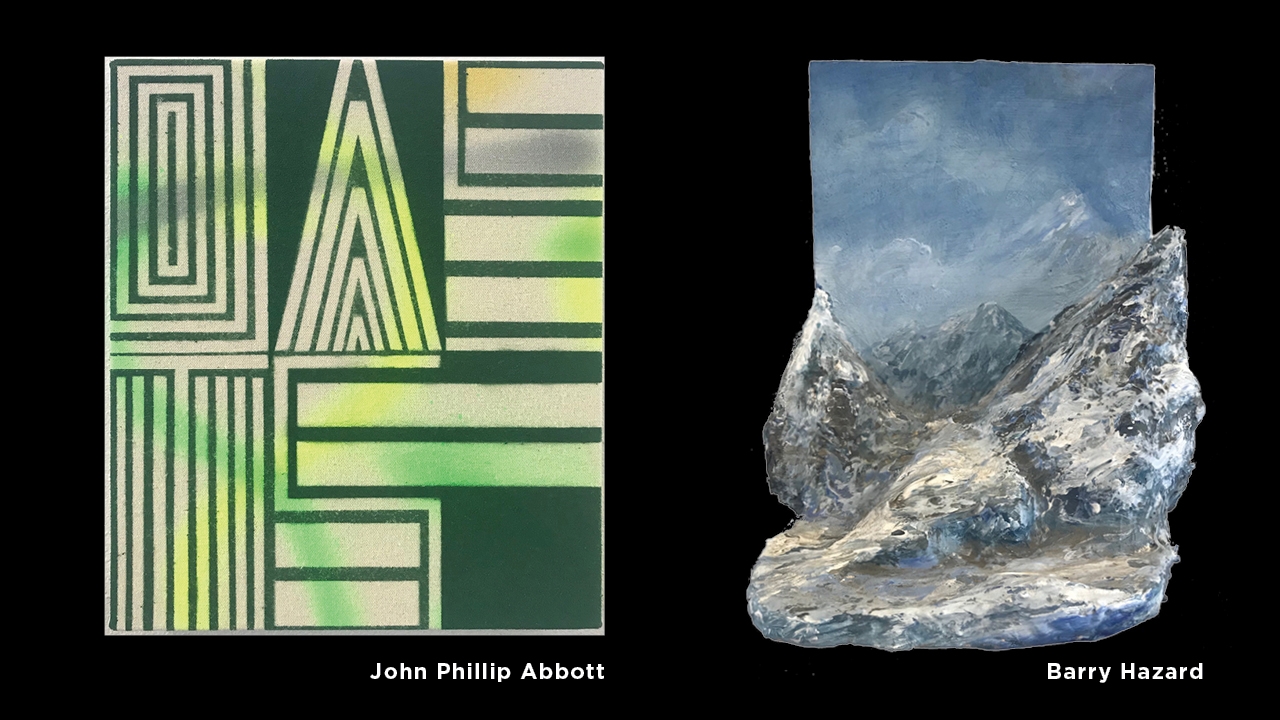 A new two-person exhibit at The University of New Mexico highlights the works of two artists – one of which is a UNM faculty member.

“Awww oasis, I wish I gave you text and relief“ showcases the work of John Phillip Abbott and Barry Hazard and is on display at the Fine Arts and Design Library through Nov. 16.

“How can anyone begin to contextualize the work of two people who commonly speak to places both distant and near? In very different ways both artists understand the attempt to surmise is futile,” said curator and library employee Jonathan Hartshorn. “Whether venturing to convey transitory whispers of conflicted surroundings or a stark consideration of self, John and Barry welcome the push back.”

John Phillip Abbott is an assistant professor of painting & drawing in the UNM College of Fine Arts. He received his MFA in 2007 from the University of Wisconsin and has held exhibits in many U.S. and international venues.

“This work consists of text-based abstract paintings made with spray paint on raw canvas,” he said, describing the UNM display. “The use of text allows me to introduce suggestions of a narrative that is economic and direct as well as organizes the space of the picture plane like that of a grid. The words in the paintings come from memories but suggest alternate meanings that are not isolated or defined by only my experiences. Personal associations with the word or words allow for informed formal decisions. My intent is to make something stemming from a personal cache that is open-ended and suggestive of multiple reads and ruminations and to develop a visual language that flickers between what is read and what is seen, between solidarity and dissolution.”

Barry Hazard received his MFA from the School of Visual Arts, New York NY in 2008. He lives and works in New York and Boston.

“My work falls somewhere between drawing, painting and sculpture,” he explained. “I make gesso-drawings, relief-paintings and sculpture-paintings on paper and panels. I am especially attracted to landscape subjects that are icons of beauty, such as mountains, forests, deserts and bodies of water. Sometimes these subjects have an inferred environmental or historical conflict. I also bring my own inferences and psychological baggage to the space, a sort of contamination of my own vision. For me, the process of creating a picture is as much about the mitigating of these conflicted subjects, as it is about making beauty.”

The exhibit is on view during all hours the library is open.