Model minority, forever foreigner and the tricultural myth terms that perpetuate issues
May 26, 2021
Categories: Inside UNM

Model minority has been a term used over the decades to define Asian-Americans through their perceived collective success. The model minority idea came out of the civil rights era to say that AAPI communities ‘have faced oppression, but yet, they’re doing great.’ It minimizes the role racism plays in the struggles of other racial and ethnic minority groups. The myth in turn has compounded health inequities including domestic violence and Asian hate crimes reportedly up more than 150 percent with 6,000+ incidents since this March. 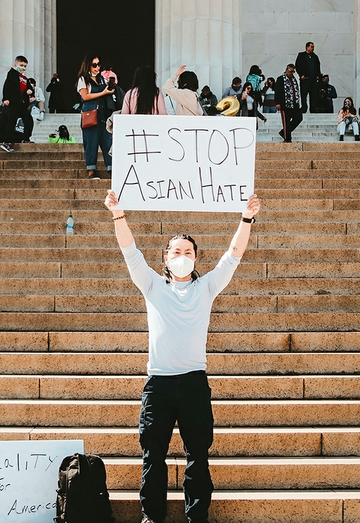 For the past 20 years, University of New Mexico’s Kiran Katira, operations director in the Community Engagement Center in the UNM Office of Community Health, has worked with local community organizers and leaders through the Center, where she now facilitates the growth and development of diverse students who apprentice with strong community leaders.

“There are so many problematic nuances with the model minority myth,” said Katira. “We (minorities) make up the majority of the planet, so people of color are the majority of the planet. Asians are about 66 percent of the planet and so we alone, we cannot be called a minority. To be called a model minority is to be compared to another, and what it does is put down other people of color. It’s almost like saying why can’t you be like these good little Asians and do like they do and that is so derogatory. It’s condescending, it’s everything.

“The perception of the model minority causes a rift between all other people of color and Asians. That rift then manifests in how people see us or don’t see us, as part of the fight for equity, justice and all the rest of it because of the myth that we are seen as trying to be white and to be closer to white and so it’s very problematic. The model minority myth is pervasive, affects healthcare, education and all the social determinants of health. It’s hurting us all, every single one of us.”

“Seeing that in the community and how it reverberates throughout and that they won’t come forward, that’s part of the model minority myth,” said Albuquerque city councilor Lan Sena, who was part of the panel and a UNM alumna in the School of Public Administration. “They won’t speak up because of it. A lot of times the hate and violence we’ve seen has been targeted toward women, that’s part of the model minority too. Women are subservient; they won’t speak up. Breaking through a lot of these perceptions and how it’s deadly, people are dying because of this – not just hurts us as community members, but it’s hurting others that are Black, Indigenous and communities of color.”

Another concept discussed during the Asian/Pacific American Leadership panel was ‘forever foreigner,’ an idea that’s tied to immigration policies, rhetoric and the media. “Immigration policy throughout American history has done this to Asians and other groups,” said Katira, who is an East-African, Asian-Indian woman, born in Kenya and raised in England. “The (idea of) forever foreigner goes back to immigration policy in the U.S. and we need to understand that history so that we don’t put everything on the teacher or the individual that’s trying to be resilient.”

Katira explained that several things need to change including policies, history books, course curriculum and building up of cross-racial coalitions.

“We are all what I call poly-cultural – parts of different experiences and that’s the richness we bring,” said Katira. “We need to understand who our ancestors are, what our ethnicity is, what our nationalities are; all of those different identities matter. It’s not just good enough for me to know about my history, everybody needs to know about Asian American history because it’s actually American history.

“It’s convoluted, but the more our young people get to experience that from a very young age, they will actually have better behavioral mental health because otherwise, they are grasping at things. If we don’t see each other’s liberation and we just fight for our own group, we’re never going to get anywhere.”

Aleli Colón, an educator at Van Buren Middle School and wife of state auditor and UNM alumnus Brian Colón, who also participated on the leadership panel, sees her role as an educator to be an advocate.

“I see myself as a teacher and an advocate for others,” said Colón. “I didn’t really seek it out, I just see myself as somebody that is there that would advocate, particularly to my students in the International District. I started as a teacher and from there, I felt that I needed to go out and advocate for them and help them reach their goals and be where they want to be however I can.”

The tricultural myth is an idea that has evolved especially in the state of New Mexico, that only Native American, LatinX and white populations are here because the Asian and Black populations are considered ‘statistically insignificant because the numbers aren’t large enough to even be thought of or studied.

“That is a real travesty,” said Katira. “What it does is it invisiblizes Asians and Black people. I can’t even imagine being Black in the world right now and what it means to be invisiblized. What we can do is storytelling and try to get more and more of us to have our histories and data and representation as part of making sure people know we exist. Maybe it also means understanding the global and national context as well and not think of ourselves in New Mexico as in this bubble or vacuum. We are part of a nation, we are part of a global community. Those are ways I think we can do that.”

The webinar was hosted by the UNM Health Sciences Center Office for Diversity, Equity & Inclusion.