Nick Estes, assistant professor in the American Studies Department at The University of New Mexico, will be at the UNM Bookstore on Wednesday, April 17 at 2 p.m. to speak about and sign his latest book Our History is the Future: Standing Rock Versus the Dakota Access Pipeline, and the Long Tradition of Indigenous Resistance (Verso, 2019).

In 2016, a small protest encampment at the Standing Rock Reservation in North Dakota, initially established to block construction of the Dakota Access oil pipeline, grew to be the largest Indigenous protest movement in the 21st century. Water Protectors knew this battle for native sovereignty had already been fought many times before, and that, even after the encampment was gone, their anticolonial struggle would continue. 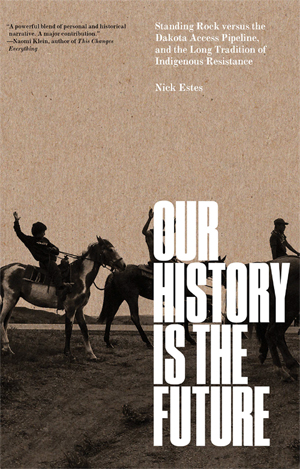 Our History Is the Future

Estes was a guest editor with Melanie K. Yazzie of a special issue of Wicazo Sa Review (Spring 2016) on the legacy of Dakota scholar Elizabeth Cook-Lynn, one of the founders of American Indian Studies. His film and book reviews can be found in Environmental History, Journal of Native American and Indigenous Studies Journal, Harvard Business Review, and Abolition Journal.

Interviews with Estes have appeared on Native American Calling, Cultures of Energy Podcast, and in Policing the Planet (Verso, 2016), a book edited by Jordan T. Camp and Christina Heatherton.

Contact Lisa Walden at 277-7494 or lwalden@unm.edu for more information.