University of New Mexico Assistant Professor Alejandro Manjavacas has been awarded the prestigious Royal Spanish Society of Physics – BBVA Foundation Award for Physics. This accolade, given in the category of Theoretical Physics, is annually presented to a Spanish physicist under the age of 35.

“It is an honor for me to get this recognition since it is the most prestigious award that a young physicist can obtain in Spain,” said Manjavacas. 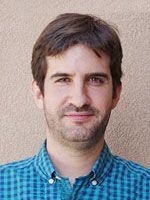 The Awards of the Royal Spanish Society of Physics (RSEF) and the BBVA Foundation include categories aimed at junior researchers, as well as in teaching and the dissemination of physics. Its purpose is to recognize high-quality research, encourage younger researchers and foster innovation.

The award cites Manjavacas’ work in “the study of the interaction of light with physical structures of dimensions in the nanometer scale, and particularly metal and graphene nanostructures. Their theoretical predictions have inspired new lines of experimental research in nanophotonics.”

Manjavacas joined UNM’s Department of Physics & Astronomy in 2015 after completing a postdoctoral fellowship at Rice University in Houston, Texas. Before that he was an FPU Fellow at the Spanish National Research Council in Madrid, Spain.

Currently, Manjavacas heads UNM’s Nanophotonics Theory research group and works with collaborators from Texas and Spain. The research group looks to understand the fundamentals of the light-matter interaction at the nanoscale, works to discover new physical phenomena and provide theoretical support to understand new experimental results in the field of nanophotonics and tries to propose and design new applications for exploiting the advances in nanophotonics.

“Sometimes it is difficult to stay far from your home country but I am very happy to see that the scientific community in Spain and in particular the RSEF recognize the hard work we are doing here,” Manjavacas said.

To read the full press release from the RSEF and the BBVA Foundation, click here.