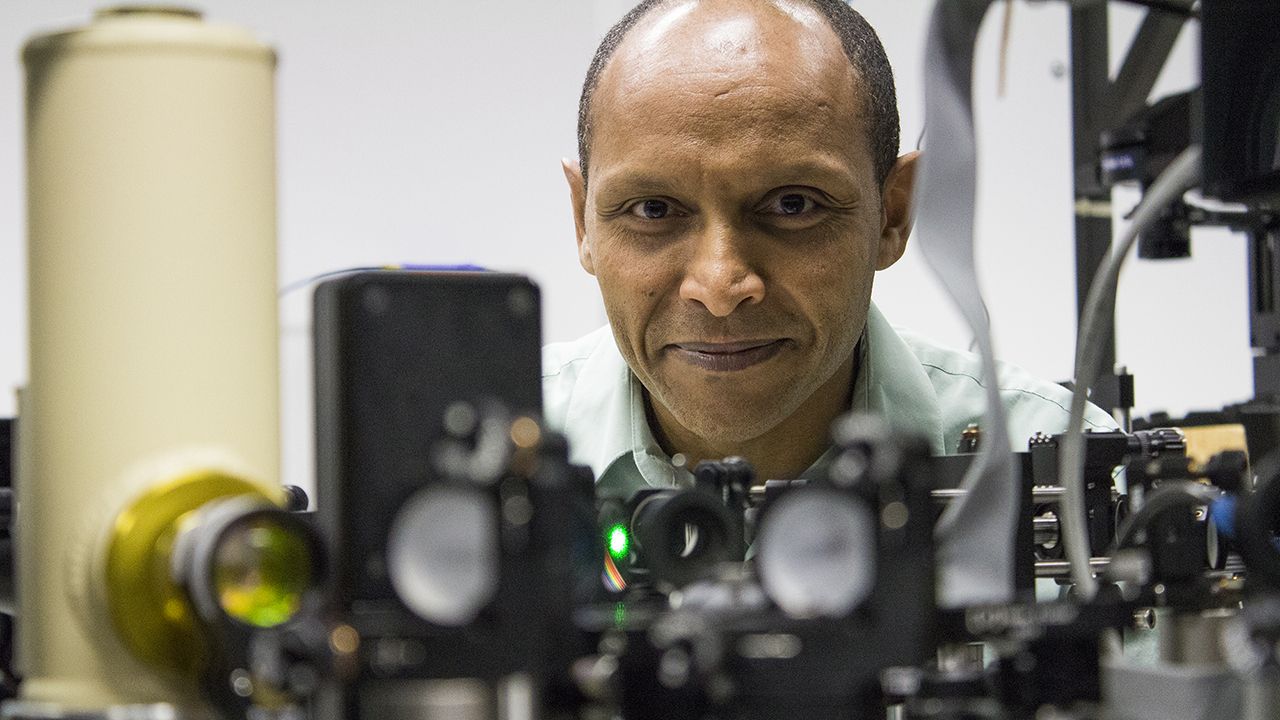 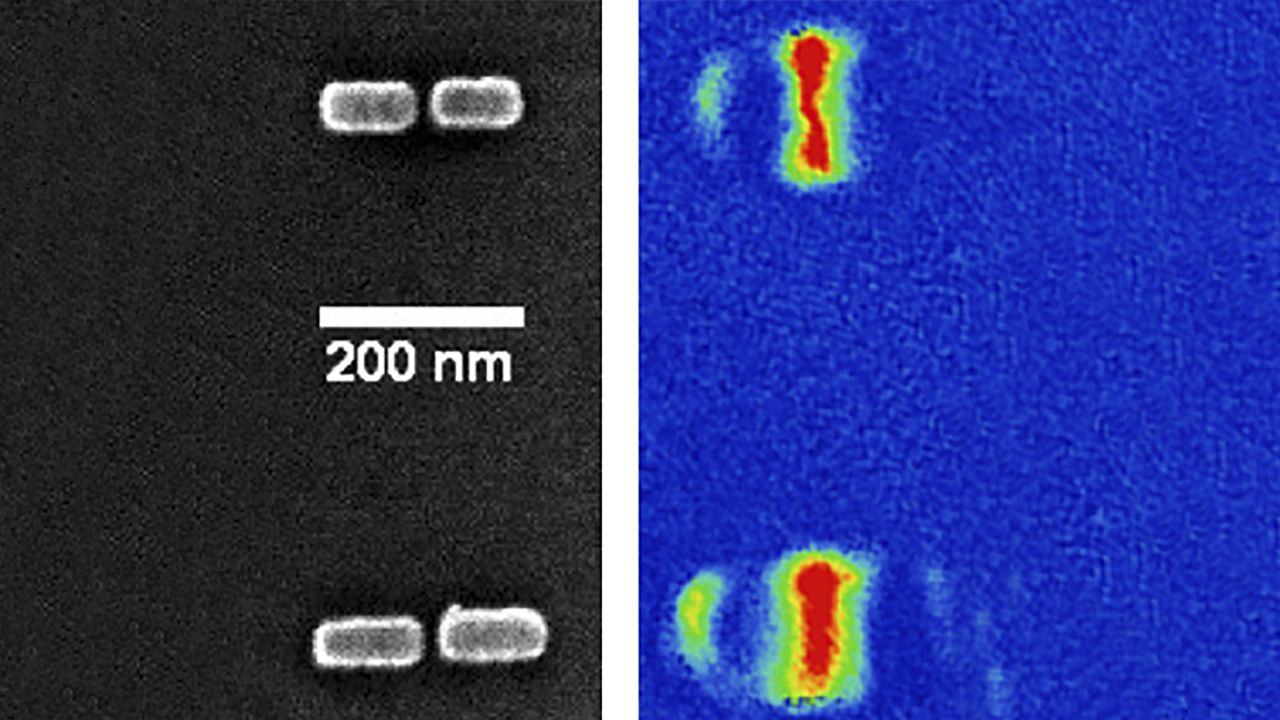 (l.) The scanning electron micrscope image shows two gold nanobars with about a 10 nm gap between them. The near-field optical image (r.) shows the localization of the electric field between the two gold nanostructures when the nanostructures are excited with light. The intensity of the localized field can be 100 – 1,000 times higher than the intensity of the excitation light. As a result, when  molecules or other semiconductor materials are placed in the concentrated electric field, they experience much stronger interaction than they would in the absence of the plasmonic nanostructures. 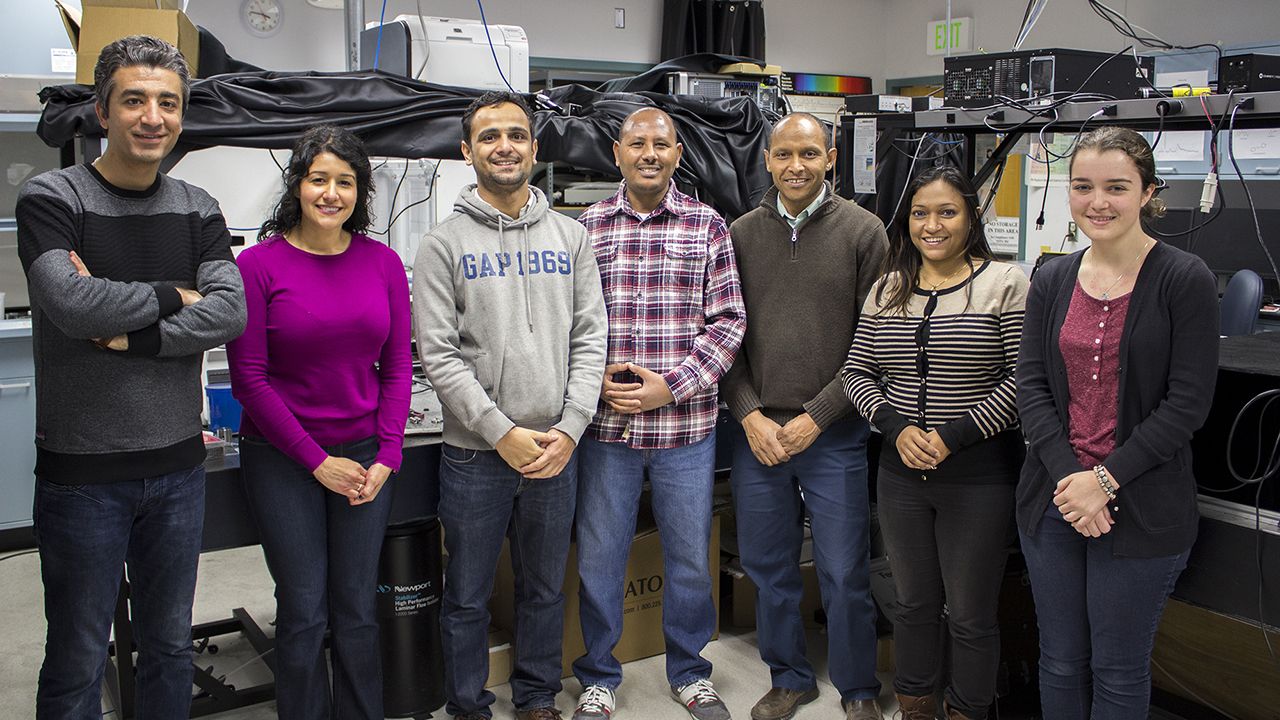 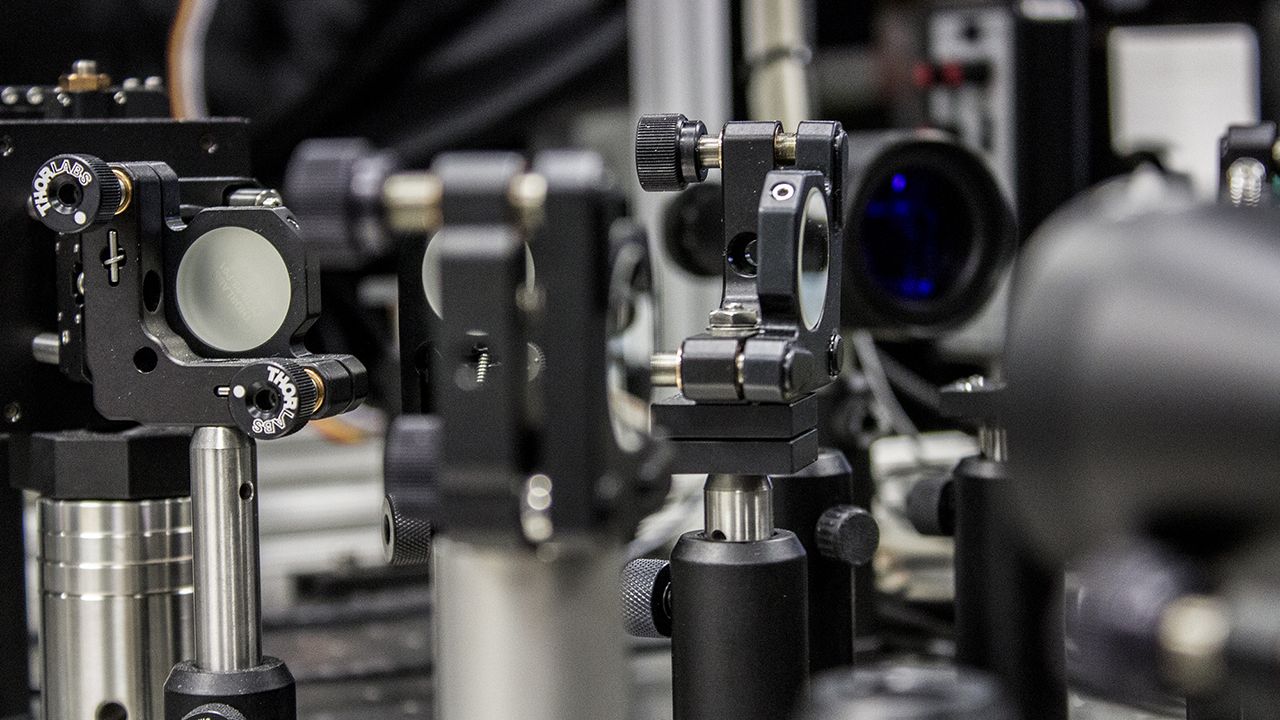 As a chemist, Habteyes uses laser light in many of his experiments, requiring advanced optics setups like the one seen here. 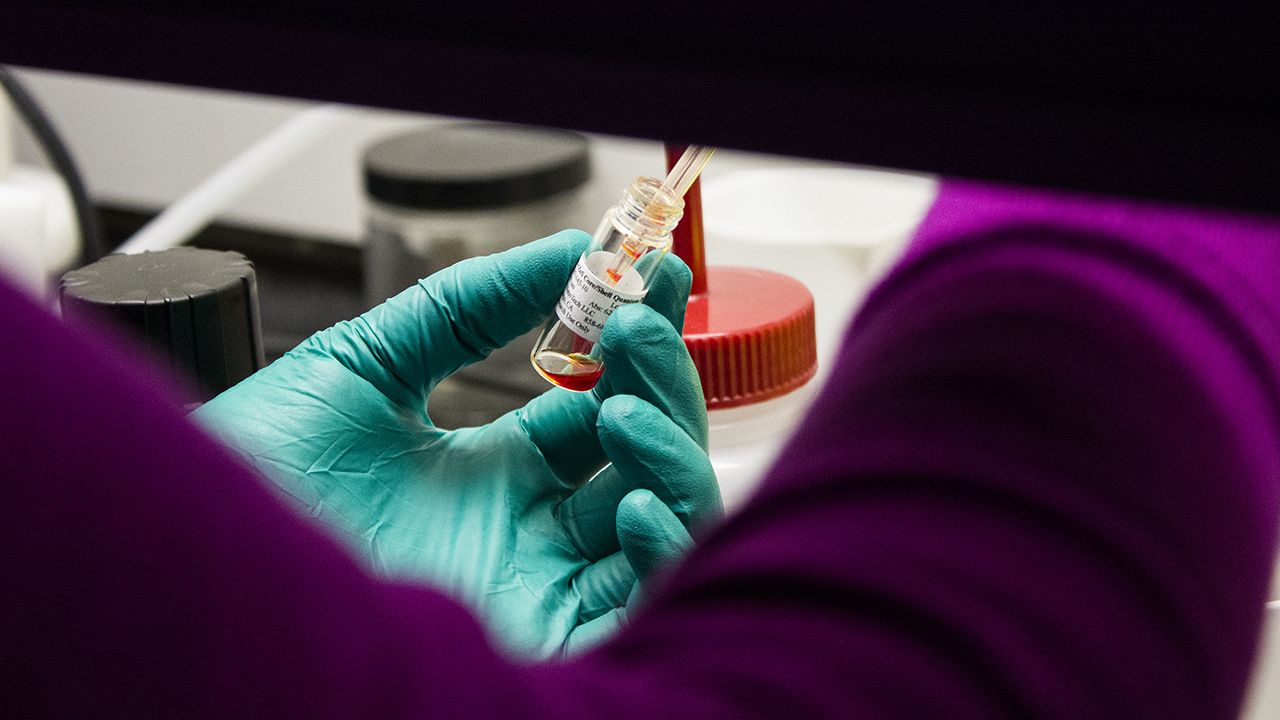 The quantum dots emit light at 660 nm wavelength when excited. For the same material, the emission wavelength can be tuned broadly in the visible region simply by changing the size of the quantum dots. This tunability of wavelength is important for solar cell application as the wavelength of the sun light covers broad spectral region. 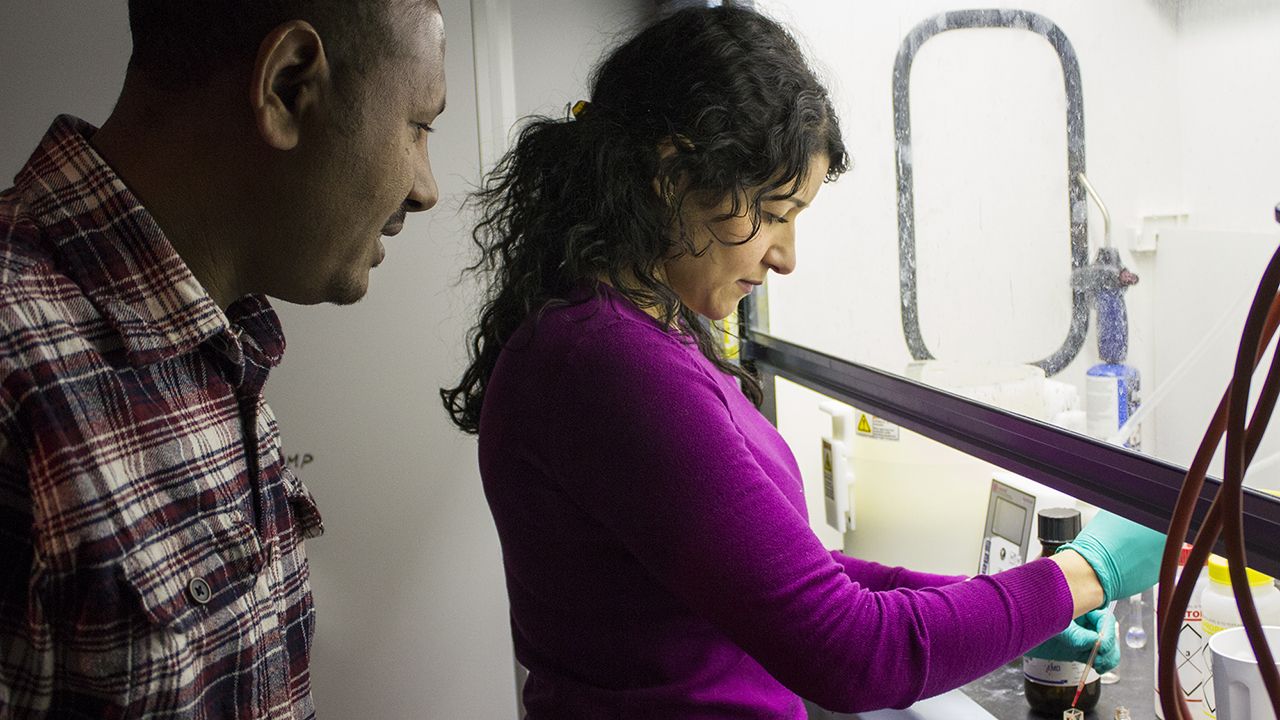 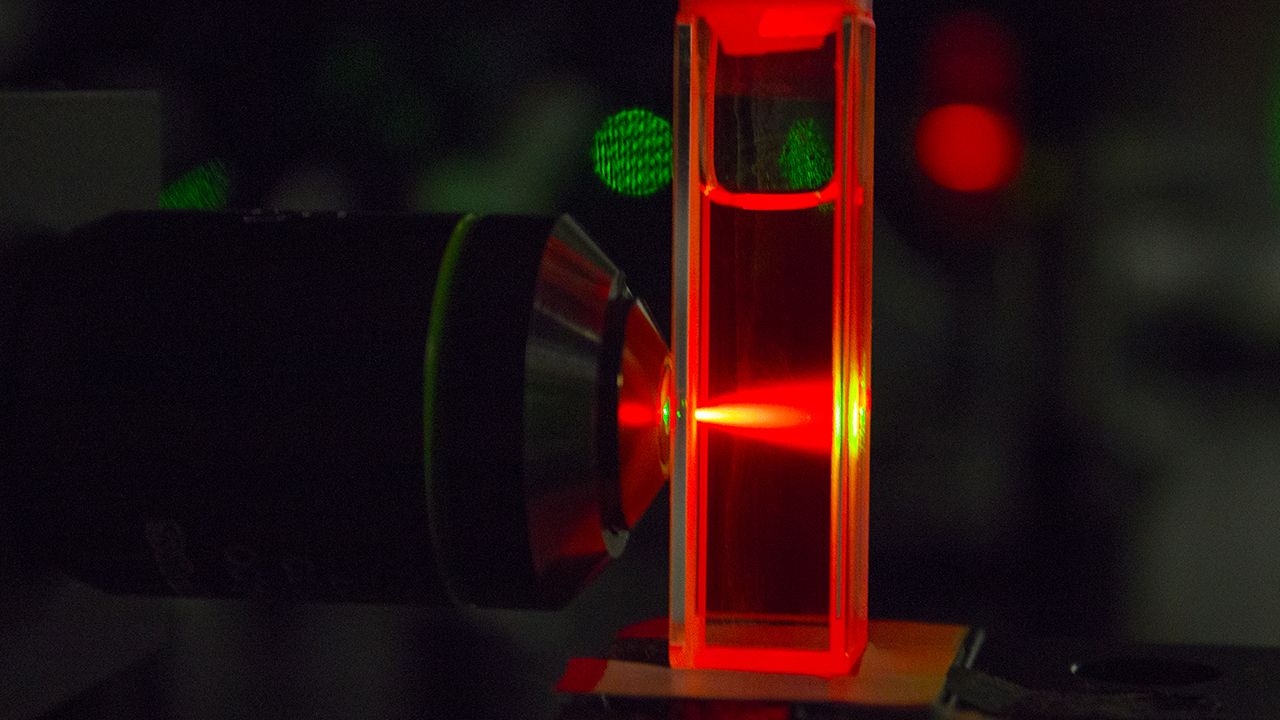 Growing up in rural Ethiopia, in a village with no running water or electricity, University of New Mexico Assistant Professor Terefe Habteyes says he was always fascinated by light. Now, as a faculty member in UNM’s Department of Chemistry and Chemical Biology, his research into the interaction between light and material has earned him one of the most celebrated science awards for junior faculty in the nation.

Habteyes is the recipient of the National Science Foundation’s (NSF) Faculty Early Career Development (CAREER) award. The accolade is considered to be one of the most competitive and prominent programs in the country and is designed to help early-career faculty get strong starts in their academic careers.

“I was very excited to hear that we were receiving this award,” said Habteyes, who conducts his research at UNM’s Center for High Technology Materials. “This is an extremely important award for me and my research group. Without this support, our work wouldn’t be able to progress and we wouldn’t have the resources to develop these new techniques.”

Habteyes’ proposal, “Near-Field Imaging for Nanoscale Visualization of Exciton-Plasmon Energy Transfer” was awarded $600,000 over five years. The money will help him and his team of graduate and undergraduate researchers continue to develop a new microscopy technique with the potential to revolutionize basic understanding of nanoscale interaction that is relevant for a variety of applications including solar cells, sensing, catalysis, spectroscopy and microscopic imaging.

The CAREER award will also allow Habteyes to reach out into the community and work with local high school students and teachers.

“As part of the NSF proposal, we are going to train one teacher in the first two summers and one student every summer from Highland High School during the duration of the award, teaching them integration and characterization of nanomaterials,” he said. “Then, hopefully, they can take what they learn back to the high school and teach other students.”

Habteyes says the hope is to create a sort of cascading effect, where they can pass knowledge to key people who will then spread that knowledge to more and more people – increasing the number of students interested in science.

Near-Field Imaging for Nanoscale Visualization of Exciton-Plasmon Energy Transfer
The project being funded by the NSF CAREER award is aimed at developing a new type of super-resolution microscope capable of imaging nanoscale materials and the energy transfers between different nanomaterials.

For scale, a human hair is about 100,000 nanometers wide, while the materials that Habteyes and his group are working to image can be as small as 5 nanometers – about 20,000 times smaller than a strand of human hair.

The microscope utilizes an extremely sharp probe that serves as an optical antenna to receive and transmit light energy. It is ideally suited for imaging optical effect called localized surface plasmon resonance – where laser light is introduced to metal nanostructures smaller than the wavelength of the light, causing a concentrated electrical field.

“These plasmonic nanoparticles allow us to squeeze light to a very, very small dimension, one or two nanometers,” explained Habteyes. “When other organic and inorganic semiconductor materials are combined with these plasmonic nanoparticles, their interaction with light increases dramatically. The microscope allows us to investigate the interaction between the plasmonic and semiconductor materials by imaging the plasmonic nanostructures and their surface optical properties with spatial resolution on the order of 10 nm or better.”

Having the ability to visualize those nanostructures as well as the interactions happening between the complementary materials will give scientists all over the world a greater understanding of how to improve the interaction of semiconductor materials with light, which is critically important for solar cells, catalysis and spectroscopy applications.

“Our primary goal is to gain a basic understanding of the interaction between plasmonic and semiconductor materials,” he said. “Once we understand that interaction, we can apply that knowledge to different applications. In the case of photovoltaic cells, this basic understanding could lead to dramatic improvement of efficiency.”