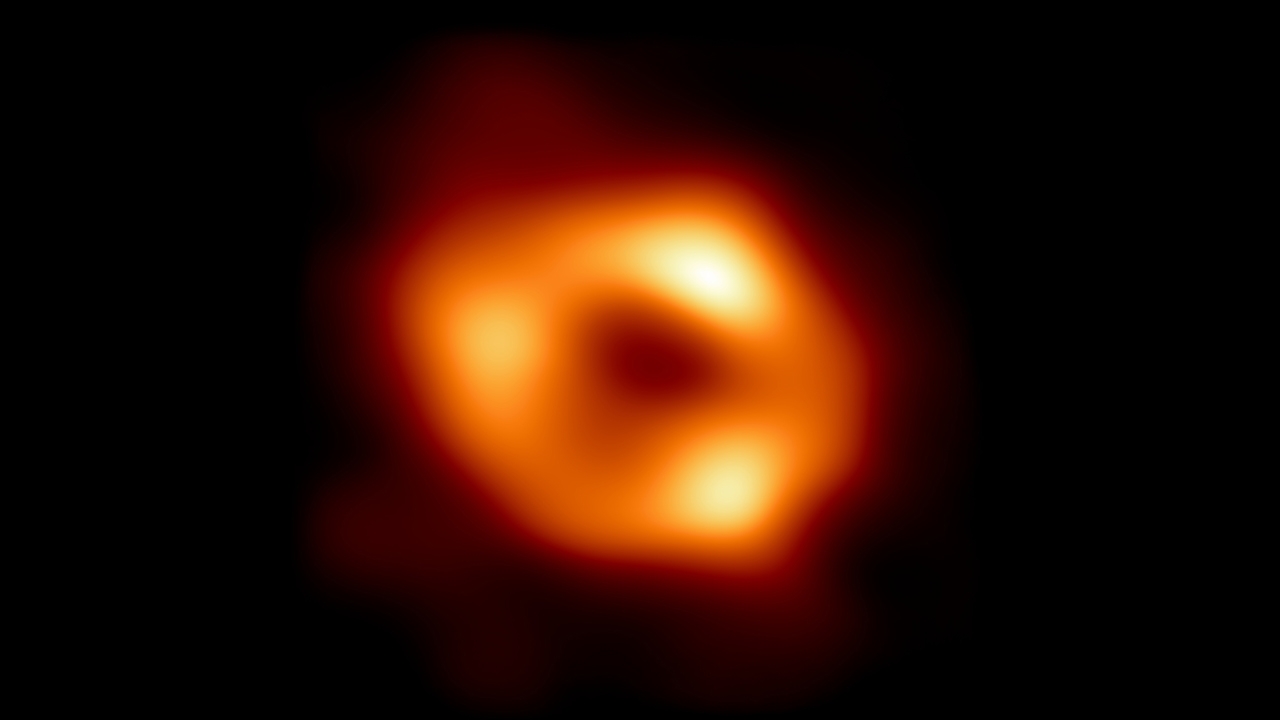 An international collaboration of more than 300 researchers from 80 institutes from around the world collaborated to produce the first image of a supermassive black hole at the center of our own Milky Way galaxy that provides overwhelming evidence the object is indeed a black hole yielding valuable clues about the workings of such giants thought to reside at the center of most galaxies.

The image, unveiled at simultaneous press conferences around the world, including at a National Science Foundation-sponsored press conference at the US National Press Club in Washington, D.C., was produced by the global research team called the Event Horizon Telescope (EHT) Collaboration using observations from a worldwide network of radio telescopes similar to the Very Large Array on the plains of San Agustin, N.M.

The image is a long-anticipated look at the massive object that sits at the very center of our galaxy. Scientists had previously seen stars orbiting around something invisible, compact and very massive at the center of the Milky Way, strongly suggesting this object – known as Sagittarius A* (Sgr A*, pronounced “sadge-ay-star”) is a black hole which the image provides as the first direct visual evidence of it.

Although scientists cannot see the black hole itself, because it is completely dark, glowing gas around it reveals a telltale signature: a dark central region (called a “shadow”) surrounded by a bright ring-like structure. The new view captures light bent by the powerful gravity of the black hole, which is four million times more massive than our Sun.

Because the black hole is about 27,000 light-years away from Earth, it appears to have the same size in the sky as a donut on the Moon. To image it, the team created the powerful EHT, which linked together existing radio observatories across the planet to form a single “Earth-sized” virtual telescope. The EHT observed Sgr A* on multiple nights, collecting data for many hours in a row similar to using a long exposure time on a camera.

The breakthrough follows the EHT collaboration’s 2019 release of the first image of a black hole, called M87*, at the center of the more distant Messier 87 galaxy. The two black holes look remarkably similar, even though our galaxy’s black hole is more than a thousand times smaller and less massive than M87*.

Even though Sgr A* is much closer to us, this achievement was considerably more difficult than imaging M87*. The researchers had to develop sophisticated new tools that accounted for the gas movement around Sgr A*. While M87* was an easier, steadier target, with nearly all images looking the same, that was not the case for Sgr A*. The image of the Sgr A* black hole is an average of the different images the team extracted, finally revealing the giant lurking at the center of our galaxy for the first time.

UNM Department of Physics and Astronomy Professor and Center for Astrophysical Research and Technologies Ylva Pihlström, a radio astronomer who conducts research involving the Galactic Center, the point at which our Galaxy is rotating about, and UNM’s Long Wavelength Array (LWA), talked about the effort and the results.

“The results presented by the EHT team are remarkable, and I find it quite inspiring that the supermassive black hole in the Milky Way can now be imaged to the detail provided,” said Pihlström, who is also the director of the UNM Campus Observatory. “It is very difficult to do this, but the observation technique is comparable to that used at our New Mexico-based Karl G. Jansky Very Large Array (VLA) and Very Long Baseline Array (VLBA) which use a combination of several telescopes.”

“The EHT observations are more complicated because of the large distances between the telescopes used, and a shorter observing wavelength,” said Pihlström. “In addition, the interstellar medium inside our Galaxy can effectively make images less focused. This blurring effect was shown many years ago by the EHT Project Director and UNM Physics and Astronomy Adjunct Professor Huib Jan van Langevelde, and has been overcome with the new EHT observations.”

Van Langevelde was named EHT Project Director in July 2020. He is an expert in Very Long Baseline Interferometry (VLBI) and is a radio astronomer at the Joint Institute for VLBI ERIC (JIVE). He is also a professor for Galactic Astronomy at the University of Leiden, The Netherlands.

Pihlström says there is much more to be learned from this image and the data provided from the observations.

“While this image shows that SgrA* indeed is consistent with being a supermassive black hole and that it follows what is predicted by General Relativity, there is other physics that can be learned from these data including time variability effects, and aspects of how material is being accreted onto the black hole,” said Pihlström. “The high angular resolution of the EHT data allows models to be tested to much finer details than what has been possible previously. In the future we are looking forward to see more results from EHT, perhaps in combination with the planned ngVLA.”

Image caption: This is the first image of Sagittarius A* (or Sgr A* for short), the supermassive black hole at the centre of our galaxy. It’s the first direct visual evidence of the presence of this black hole. It was captured by the Event Horizon Telescope (EHT), an array which linked together eight existing radio observatories across the planet to form a single “Earth-sized” virtual telescope. The telescope is named after the “event horizon,” the boundary of the black hole beyond which no light can escape.