Atanassov, a Distinguished Professor of Chemical and Biological Engineering, is an internationally recognized expert on new materials and technology for electrochemical power sources. His research includes development of non-platinum electrocatalysts and nanostructured catalysts for fuel cells, advanced electro materials for batteries and biological fuel cells and the design for sensor systems.

His leadership further strengthens CMEM’s industrial collaborations as his group’s jointly-developed fuel cell technology with Daihatsu Motors was honored as a “Top 10 Innovation” at the Innovation for Cool Earth Forum held in Tokyo, Japan. He was STC.UNM’s Innovation Fellow for 2014 in recognition of his patents and commercialization accomplishments.

Atanassov received his Ph.D. in Chemical Physics from University of Sofia in 1987 and has been a faculty member at UNM from 1992 to 1999 and since 2000. He replaces Professor Abhaya Datye as CMEM’s director. Datye now serves as chair of the Department of Chemical and Biological Engineering. 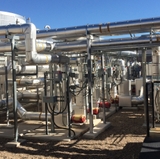