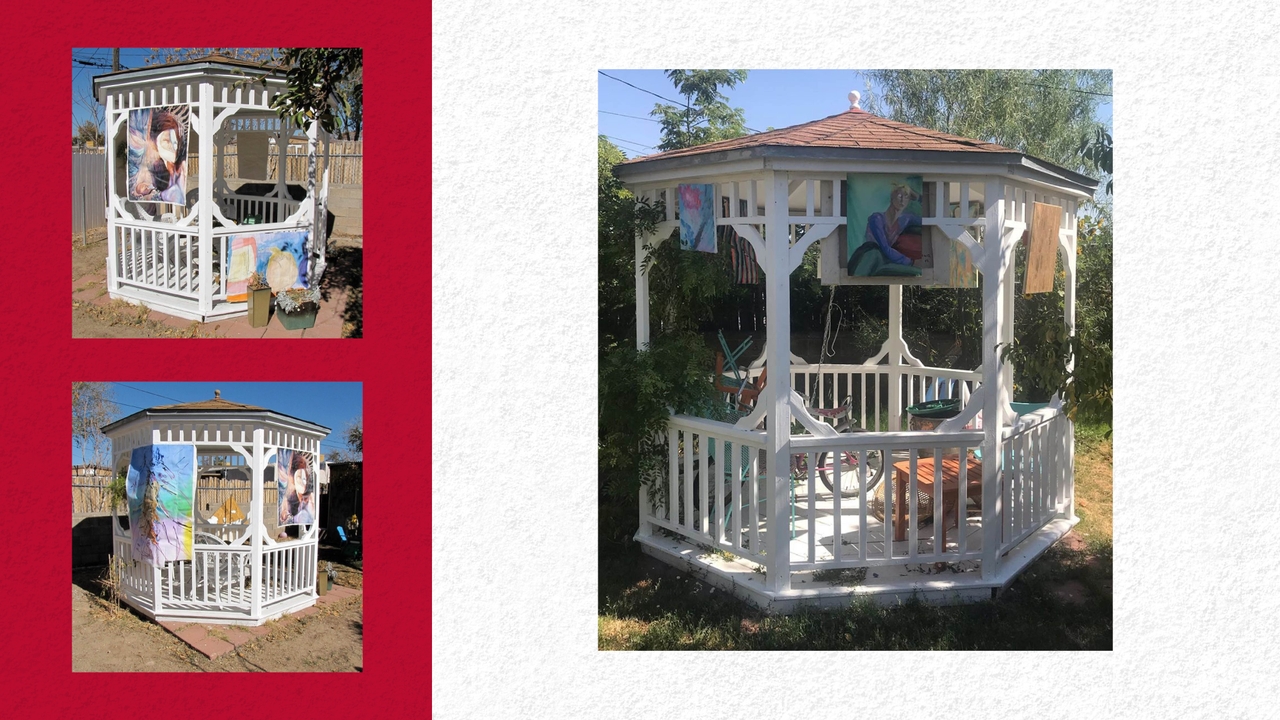 A white gazebo situated in the backyard of an Albuquerque home is not the first thing that comes to mind when thinking of art show venues. But Calendar, a gazebo gallery, is picking up steam thanks to a recent $8,000 grant.

Jonathan Hartshorn is the mastermind behind the project, and also works as an artist and UNM staff member in the Fine Arts and Design Library.

“Starting out, I would sit in my backyard and look at that gazebo and think that it was such an amazing space,” Hartshorn said. “I realized it could be used more effectively than it was.”

The 10-foot wide, white, covered garden structure sits among raised flower beds and invites people in as they step into the backyard. Hartshorn hopes the quirky venue can provide an area where artists can show off their work, and also gather to collaborate and enjoy creativity together.

“There are a lot of alternative spaces here,” Hartshorn said. “Many grad students will start spaces, but those just fizzle out after a few years. But since I own the house, and the gazebo is in the backyard, I think this space will continue being open for a while.”

In 2012, he started inviting friends to exhibit their work in the gazebo. He even allowed his five-year-old son to host a show – glitter glue drawings on library letterhead, canvas art pieces and a small reception. He says his inspiration was from bigger galleries in New York, where patrons of the arts can go enjoy shows and museums for free.

The gazebo’s potential earned Hartshorn an $8,000 grant from the 516 ARTS Fulcrum Fund, a local contemporary art museum. The money will support the 2020 program of solo exhibitions, featuring Eve Fowler, Joshua Abelow, Stephen Maine. More exhibits will be added as the budget is being adjusted. 10 awardees were chosen from a pool of 112 applicants, all from New Mexico. According to its website, the Fulcrum Fund “provides grants in support of the development and presentation of artist-led projects and programs that generate meaningful shared experiences and inspire curiosity, engagement and dialogue.” The mission closely coincides with Hartshorn’s vision for his art space.

“We strive to utilize the gazebo to display art in a manner that we were not seeing in or outdoors,” Hartshorn. “The gazebo is a functional and theoretical space at the artist’s complete disposal. Calendar doesn’t tell artists what to show, and we don’t tell artists how to install their work.”

Stephen Maine’s show Shrinkwrap will debut the season later this month. The exhibition consists of a continuous scroll of painted polyethylene plastic that completely encloses the gazebo.

The opening reception is being held in Calendar on March 28 from 4 to 6 p.m. and the show will be up until May 2, 2020. Those interested in viewing it should contact Jonathan Hartshorn for the address location.