The Center for the Southwest at The University of New Mexico announces the 2017 C. Ruth and Calvin P. Horn Lecture in Western History and Culture.

Bancroft Award winning historian Dr. Ari Kelman, Chancellor’s Leadership Professor of History at the University of California, Davis, will present “For Liberty and Empire:  How the Civil War Bled Into the Indian Wars,” on Thursday, Feb. 23 at 6 p.m. in the Student Union Building Lobo A&B. 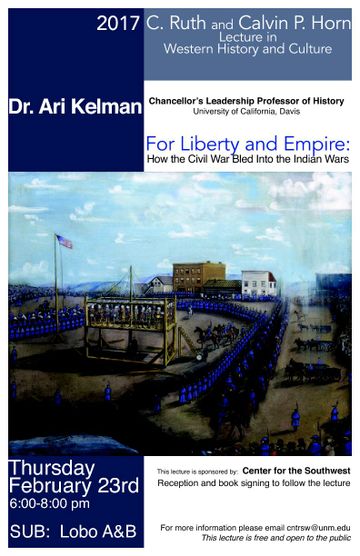 Kelman’s lecture will explore how the American Civil War expanded westward as a military campaign against American Indian peoples. His story begins with the Dakota Uprising of 1862 in Minnesota that culminated with the public hanging of 38 Dakota men while the Civil War raged in the East. From that dark event, Kelman traces the trajectory of military interaction between the United States Army and American Indians in the West.

Kelman attended the University of Wisconsin-Madison where he earned his B.A. in History. He continued his education at Brown University where he received his masters and doctoral degrees. His works include A River and Its City:  An Environmental History of New Orleans, A Misplaced Massacre: Struggling Over the Memory of Sand Creek and most recently Battle Lines:  A Graphic History of the Civil War. Kelman has been awarded several prestigious prizes for his work including the Abbot Lowell Cummings Prize, the Robert M. Utley Prize and the Bancroft Prize.

This event is free and open to the public. A book signing and reception will follow the lecture.

For more information about the 2017 C. Ruth and Calvin P. Horn Lecture, or other events sponsored by the Center for the Southwest, call 505-277-4344 or email us at cntrsw@unm.edu. You can also follow the Center online by visiting our website or on Facebook or Twitter (@cntrsw).

Tags: Center for the Southwest