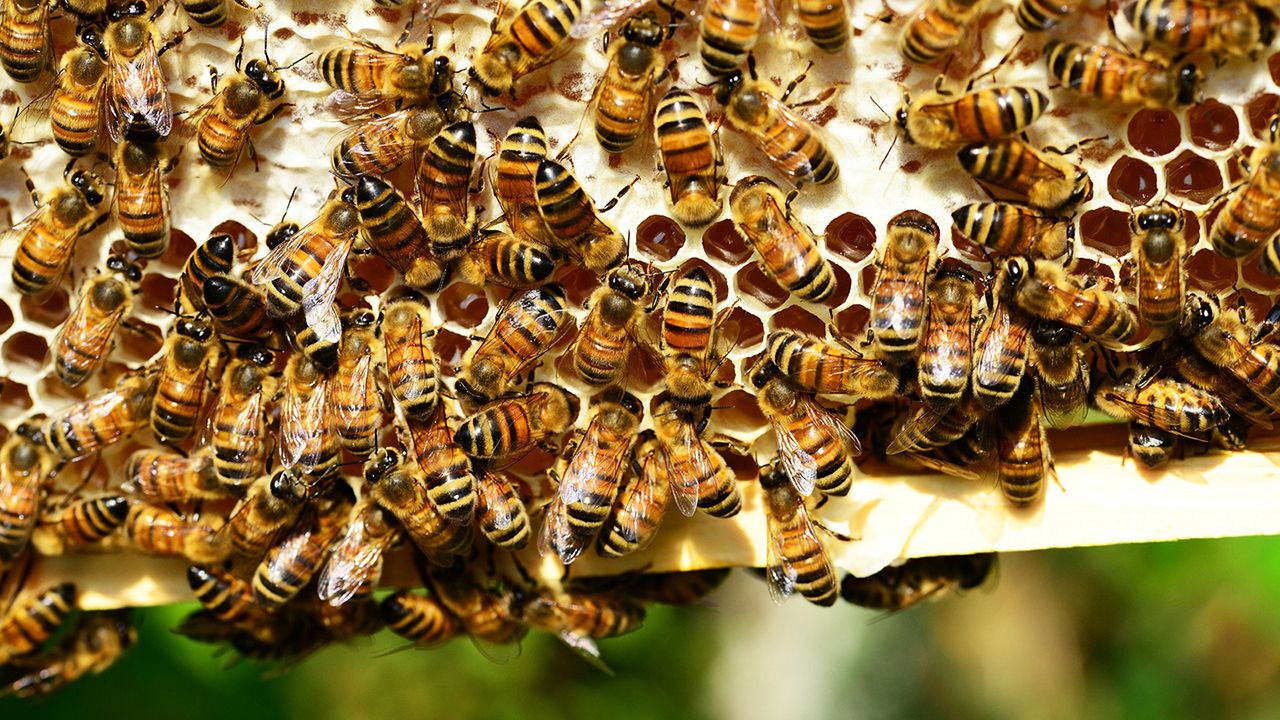 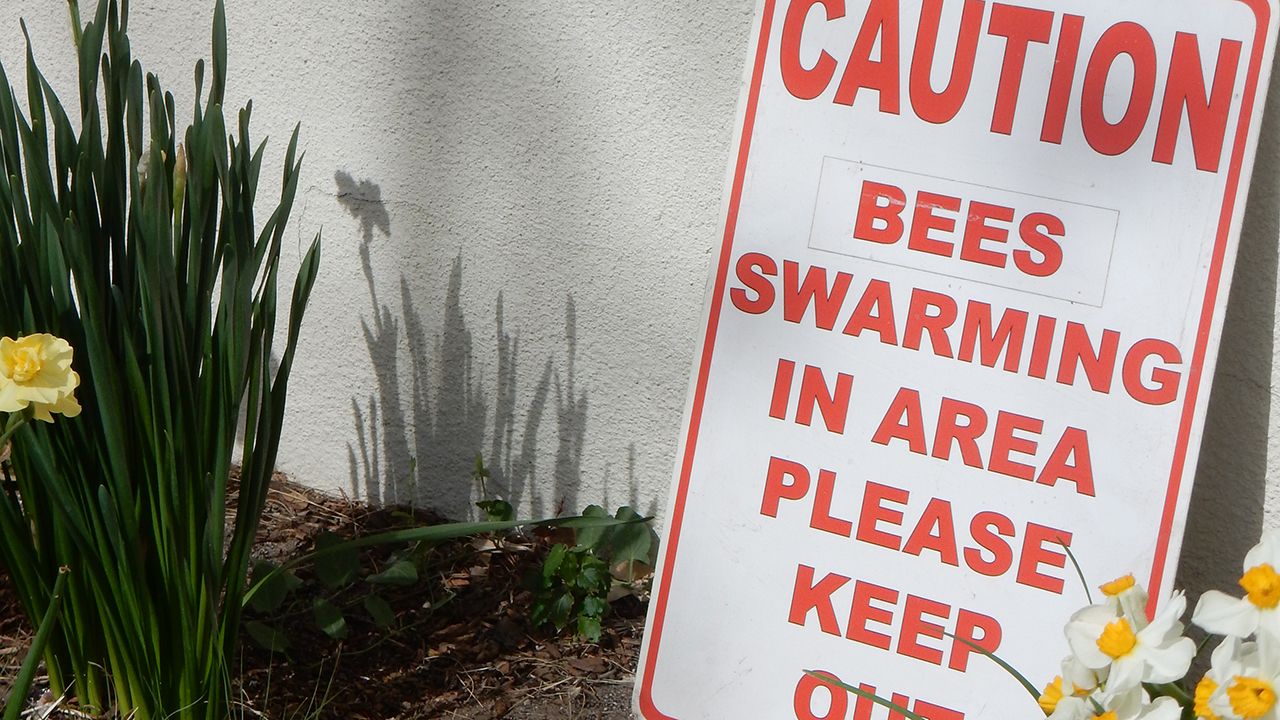 When bees swarm on the UNM campus, PPD Grounds & Landscaping barricade the area and posts signs to alert people of their presence.
Credit: Rachel Stone 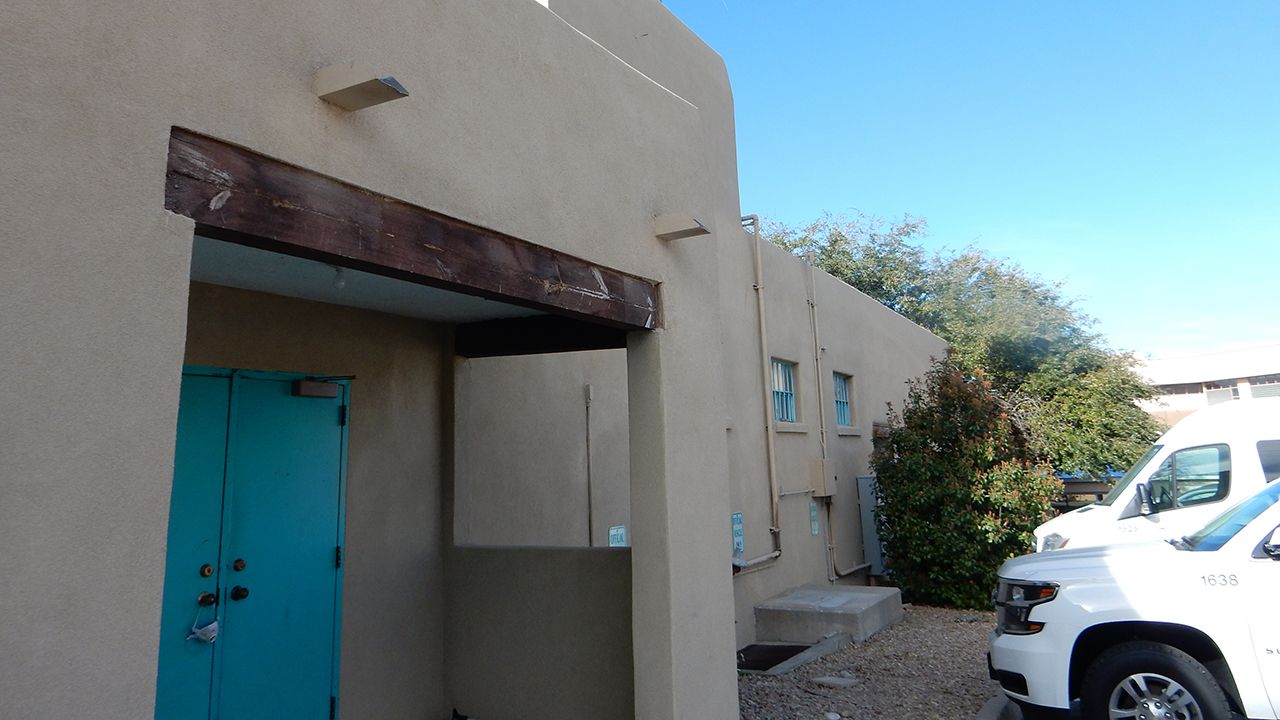 Spring brings a buzz to campus, and sometimes that means visits from local honeybees. Most bees just stop by for a cruise around the variety of flowering flora to collect their valuable nectar, but when they are discovered to have made a permanent home at The University of New Mexico campus, great care is taken to protect these furry friends, even if they’ve nested inside the walls of a UNM building.

“About three to four times a year, we find bee swarms and hives on campus, and when we do, we do everything we can to protect them, and in some cases, we call local beekeepers to have them relocated,” says Felix Vallejos, Integrated Pest Management tech of the Physical Plant Department (PPD) Environmental Services.

Late last summer, a new hive was found established in a column at the front entrance of the historic Biology Annex building. Upon its discovery, it was unknown how large the colony was or how long it had been there. It appeared that the bees had entered through a tiny hole, smaller than a dime, in the stucco. Scout bees are responsible for locating nesting sites that are safe for the swarm, and ultimately the queen bee. These sites are typically dry, dark cavities located up high. Once the scout feels it has found a secure site, it flies back to where she originated to communicate with the swarm by doing a characteristic “dance.”  Together the swarm decides if it’s a good location.

Lisa Roberts, a local Albuquerque beekeeper and spouse to PPD’s own Dennis Roberts (Area 4 plumber), was called in to trap and relocate the colony found inside the wall.

“I keep bee hives at home, and I thought this would be a good opportunity to help these bees relocate safely,” says Lisa Roberts.

Roberts trapped the bees by placing a screen tube to the small hole in the building where it was believed the bees entered. It was then sealed with putty so the bees couldn’t re-enter the building once they’d left. The other end of the tube was placed near a “nuc box” opening, so the returning bees could move into the box when they returned from foraging. According to Roberts, it took about two months to collect all the bees living in the Biology Annex building, including the queen.

“It was apparent to me that this was a new hive of approximately 1,000 bees because a well-established hive has approximately 50,000 to 60,000 bees. This colony of bees are now living at my house doing what bees do best,” says Roberts.

When a hive is found in the wall of a building, it’s imperative to have it removed to maintain the building’s structural integrity. Moisture from the hive can foster mold and dry rot, and in some cases, can damage the wood studs that frame a building. This can be very costly to repair. Hives found outdoors on the University campus, can be left alone if the location of the hive doesn’t pose a safety risk to the built environment of the campus or the people within it. There are at least two established hives on UNM’s Main Campus that are known by the PPD Grounds & Landscaping staff.

Local honeybees are not considered aggressive and Vallejos says that the bees he’s come into contact with on the UNM campus are very mellow and just want to find a safe place to colonize and find food. Swarms can occasionally be found on campus, so the Grounds & Landscaping staff will flag the area and place signs letting the community know that a swarm is nearby and to use caution.

Roberts said beekeepers avoid wearing dark clothing such as black, brown, blue or red when working with bees because they associate the color with that of bears, especially during bee season. If the bees feel threatened, even by the color of one’s clothing, a bee may sting.

“Bees just want to protect their hive, their queen and their honey, so leaving them alone to do their work is the best thing we can do to help preserve our precious honeybees,” says Roberts.

PPD would like the UNM community to know that if you spot bee swarms or bee hives on campus, contact PPD Work Control at 277-1600 to notify the Integrated Pest Management staff. Never approach a swarm or a hive and it is never advised to spray bees with pesticides.

If you are interested in learning more about bees in Albuquerque, contact Albuquerque Beekeepers  or UNM’s student organization UNM Beekeeping Club.