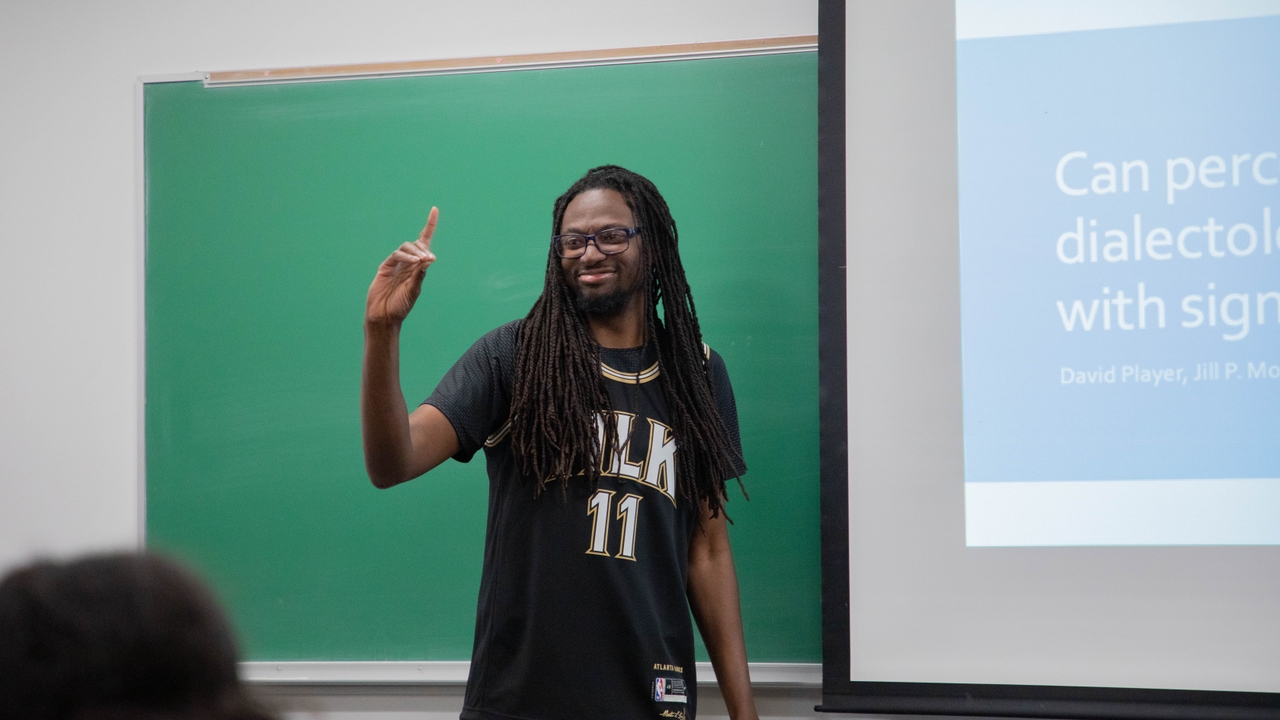 Player, a Black Deaf graduate student, taught the audiance his name sign during his presentation. 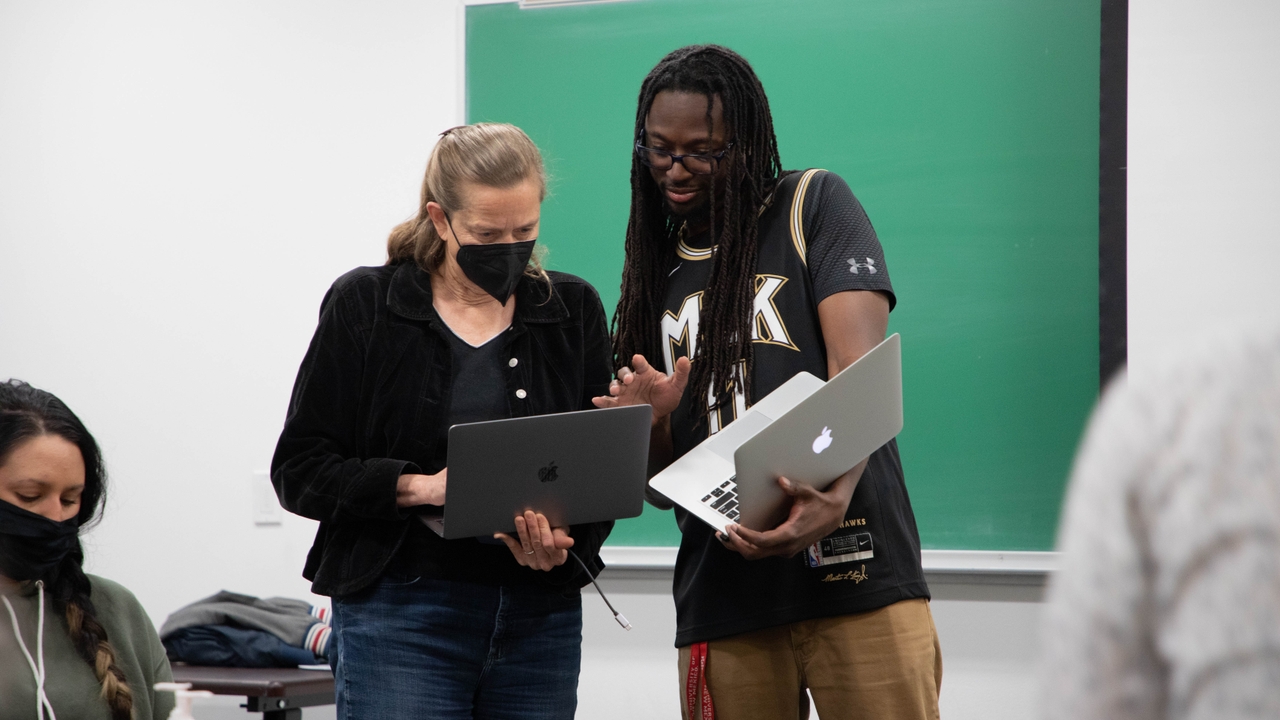 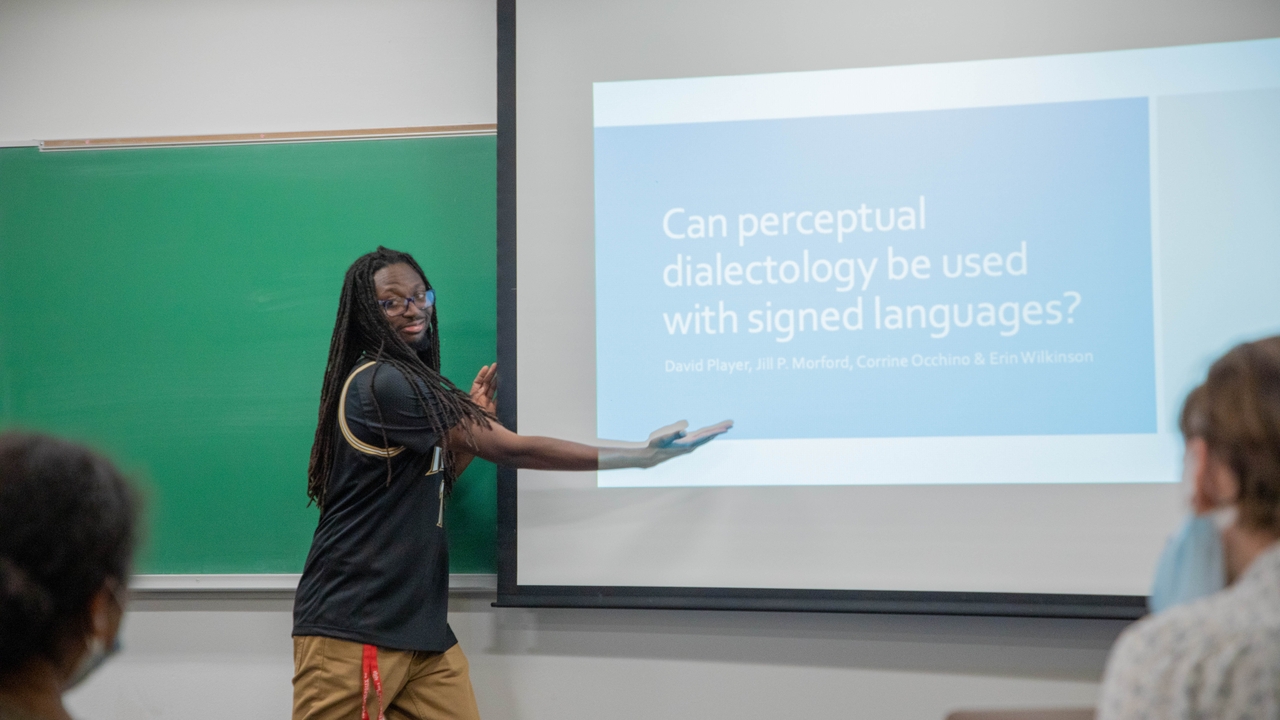 The project was presented during the April Lobo Language Acquisition Lab. 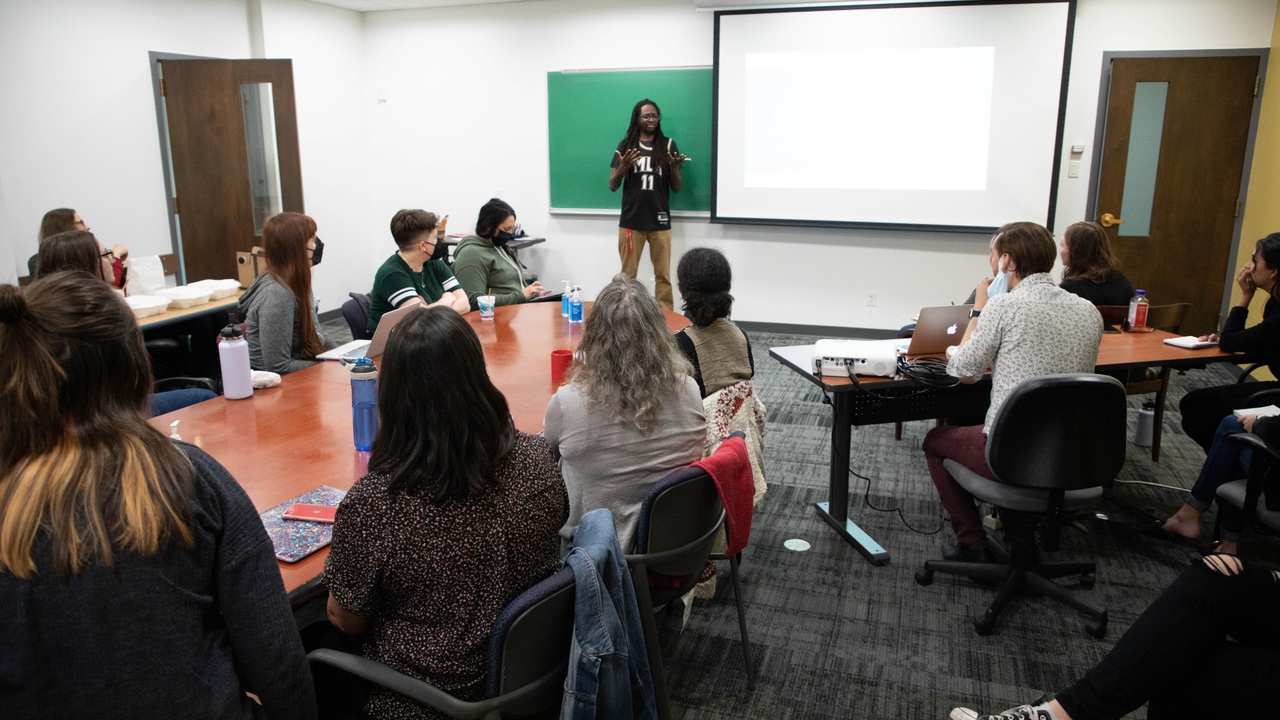 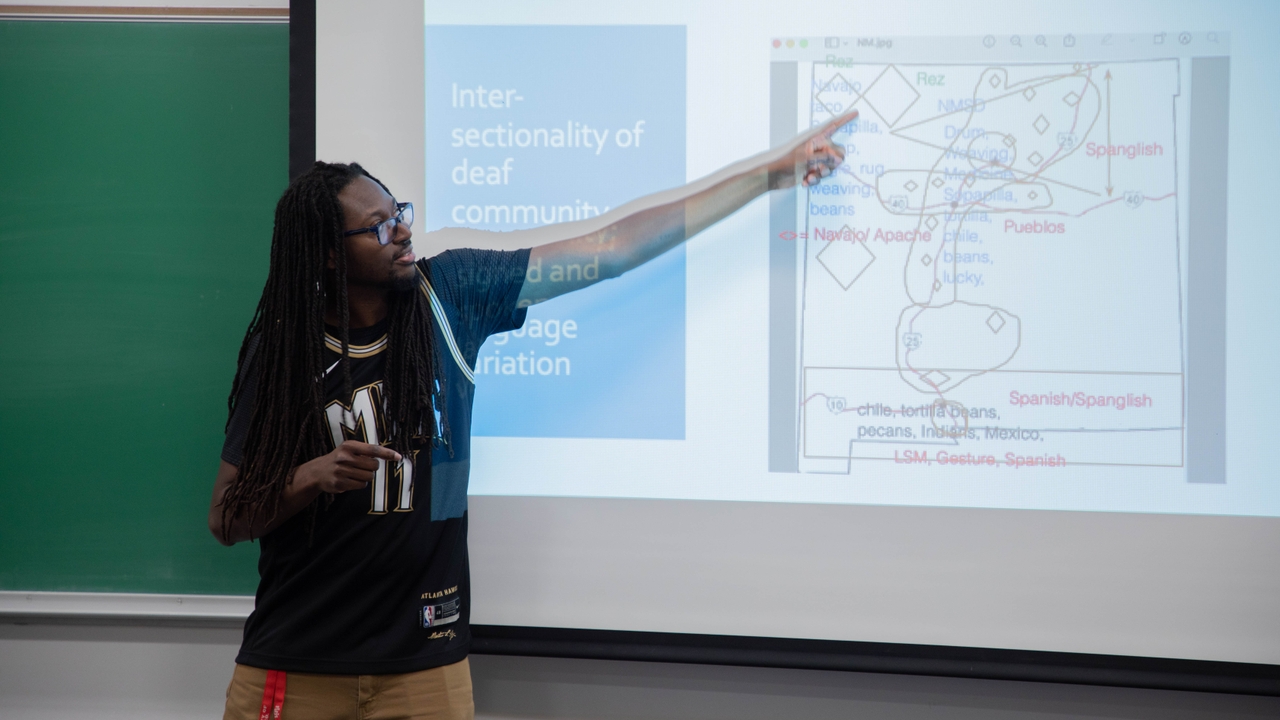 When traveling through Arizona, New Mexico, and Texas, a request for chile on a cheeseburger will yield three different types of flavors. In the same way, a University of New Mexico graduate student is doing trailblazing research showing dialectic varieties of sign language in New Mexico and influences on signed communication.

Just as a person in Northern New Mexico may speak a different colloquial version of English than a person in Las Cruces, so it is that Deaf communities have different signs that are influenced by region, culture, environment, race, and ethnicity. It’s a concept that’s well-known in Deaf communities but has very little academic research to explain it.

“Often people feel proud of their language and their identity – and the same goes for the Deaf community. But there are some varieties of ASL that have received almost no attention  and we’re trying to get those recognized.” -David Player, UNM Linguistics

David Player is a Black Deaf graduate student in the UNM Department of Linguistics. Originally from Shreveport, Louisiana, he came to New Mexico after completing his B.S. in Sociology at the Rochester Institute of Technology. Inspired by groundbreaking research showing evidence of sociolinguistic variation in Black ASL, David is focusing his studies at UNM on sociolinguistics of signed languages. While teaching ASL IV in his first semester of graduate study, he saw students who grew up in New Mexico using a different sign for the word ‘lucky’ than he was used to. The New Mexicans told him that the sign he used for ‘lucky’ means ‘chile’ here – as in red or green. Eventually, he met more Deaf New Mexicans and they confirmed the NM signs for ‘lucky’ and ‘chile’ that he had learned from hearing interpreting students.

With his background in Sociology, Player understands how sociocultural factors have an enormous impact on language variation as shown by the Black ASL Project. He is now looking to build on his knowledge to examine language variation in New Mexican ASL, carrying out unchartered research in perceptual dialectology – the study of how nonlinguists perceive variation in language.

“Most people think that the Deaf community is homogenous and it’s not,” Player said. “Where you grow up, the kind of education you received, the language exposure you’ve had – all of those things are factors and make language variation complex.”

In the entire United States, only one or two projects have attempted to document variation in ASL, and neither have focused on areas of the country with as rich history as New Mexico – which brings together Navajo, Apache, Pueblo, Spanish and Anglo cultures.

“Using traditional research methods on studies like these can take between 20 and 30 years to have any results, so we chose to do a perceptual dialectology project because we don’t have 30 years – David is a masters student and wants to graduate next year,” said UNM Linguistics Professor Jill Morford. “We had to figure out a way to learn about variation in New Mexican ASL without taking 20-30 years. So, we reached out to Deaf people to see what their intuitions are about their own language, and it’s generated this very rich response.”

Player interviewed nine people and found there are at least four different varieties of New Mexican American Sign Language, including three regional varieties –northwest NM associated with native communities, middle Rio Grande region associated with the school for the Deaf in Santa Fe, and southern NM. The participants also identified community centers of variation, which included Farmington, Santa Fe, Albuquerque, and Las Cruces. While Santa Fe and Albuquerque are within the same region, historical factors related to deaf schools and the relocation of deaf people to New Mexico have created different patterns of ASL usage in these cities.

“But there could be even more, depending on how unique you want to consider the variety,” he explained. “It’s very rich, there’s very rich variation here.”

Player also asked participants about attitudes towards varieties around the state, identifying areas of where they deemed language was “less than” or “top notch”. Finally, Player asked them about the need to adapt their signing to accommodate people who are unfamiliar with regional variations. This type of codeswitching tends to suppress variations of language that hold important cultural, racial or social relevance.

“For example, someone who is Deaf from the Navajo Nation will have their own culture, their own lived experience and their own language,” he said.

When those people leave their communities, they tend to adapt their language so others can understand. These changes may lead to greater social acceptance, but accommodating the majority culture can also inherently alienate minorities. Combatting this will take an understanding of varieties of sign language, the social determinants of variation, who is most impacted, and how communities perceive and communicate their dialects. Which is why Player says he’s far from being finished with this research.

“Hearing people, people who are not Deaf, are lightyears ahead of us as far as research on spoken language variation is concerned,” he said. “It would be cool to expand the participation, code the results, and submit an article or paper to a peer-reviewed journal.”