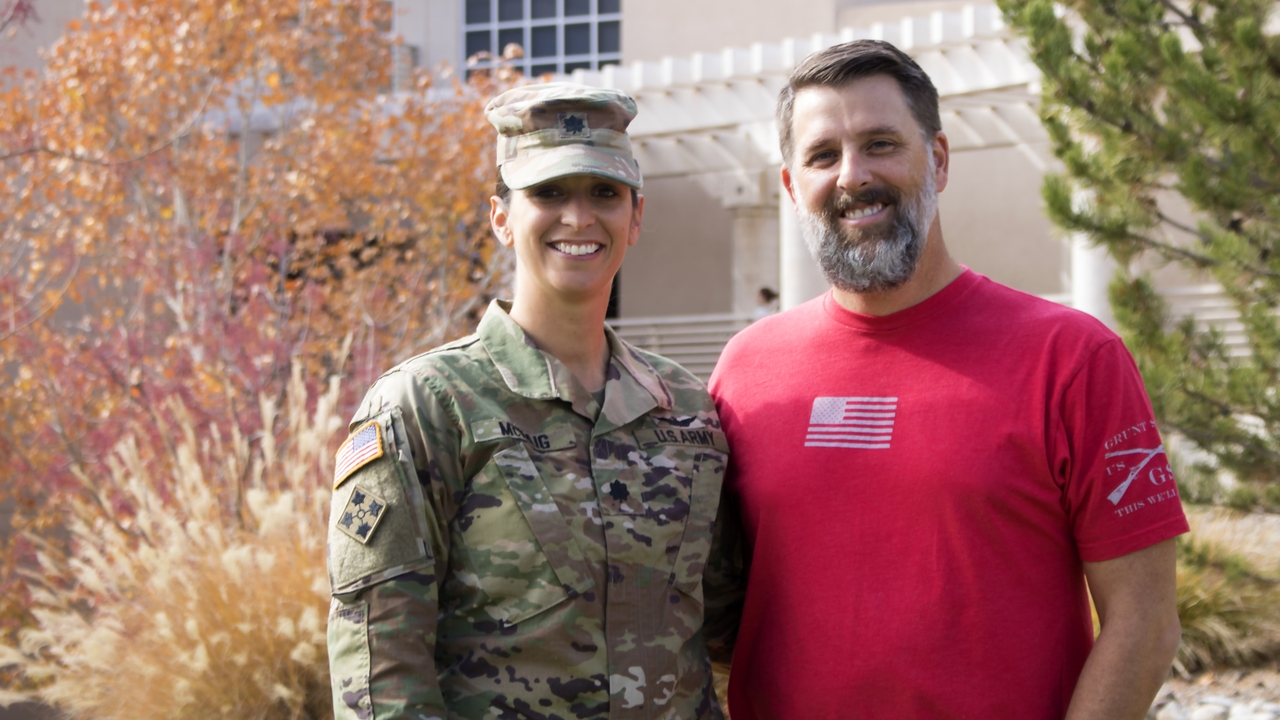 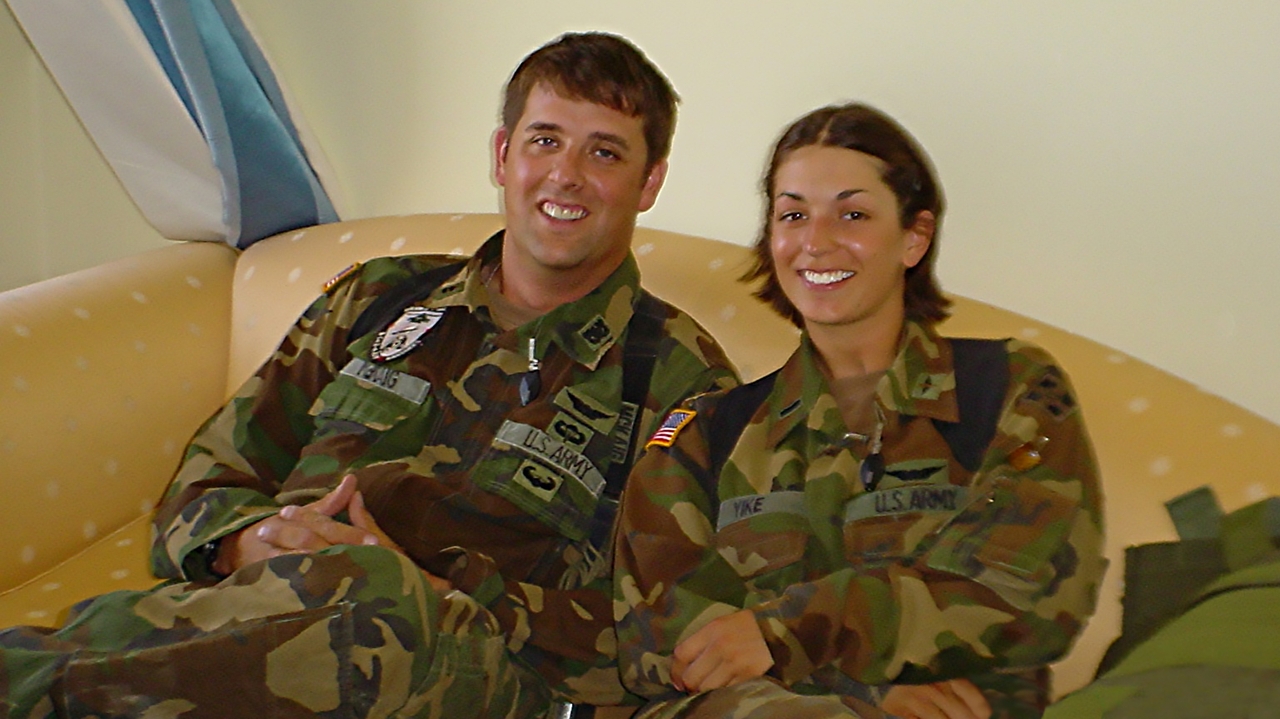 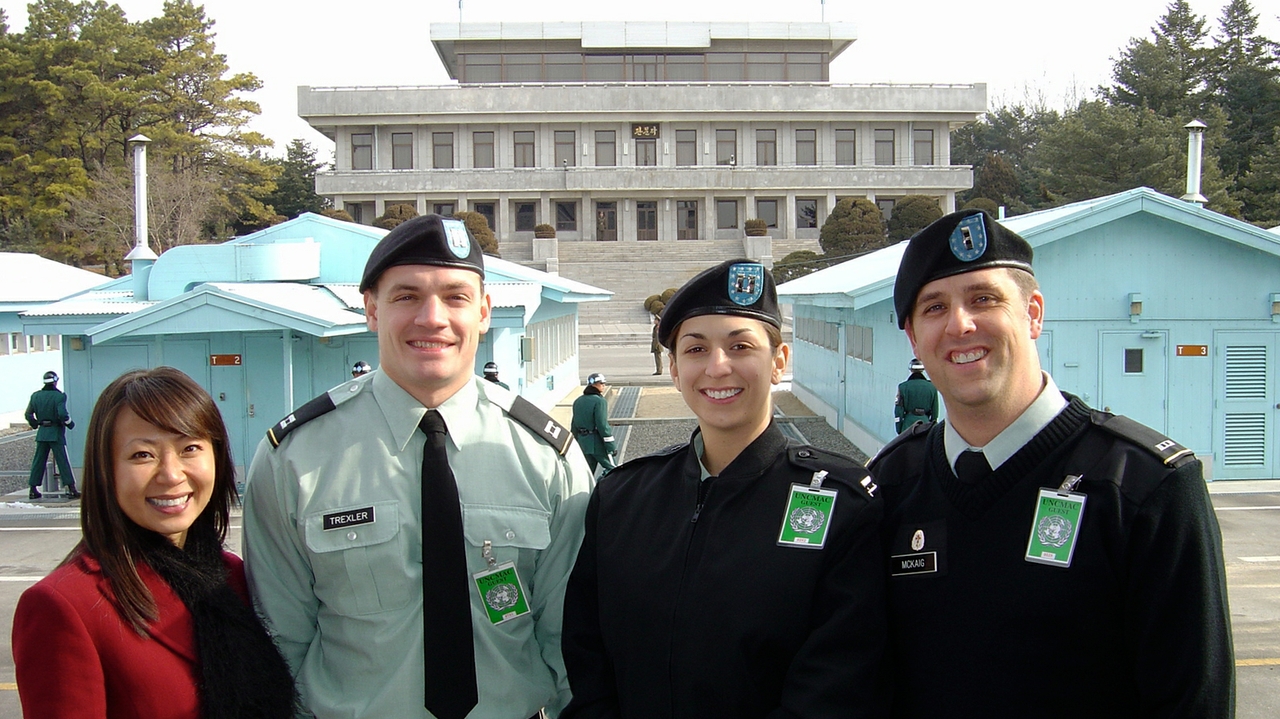 Alissa and Roone in the Korean Demilitarized Zone in 2005. North Korea is behind them. 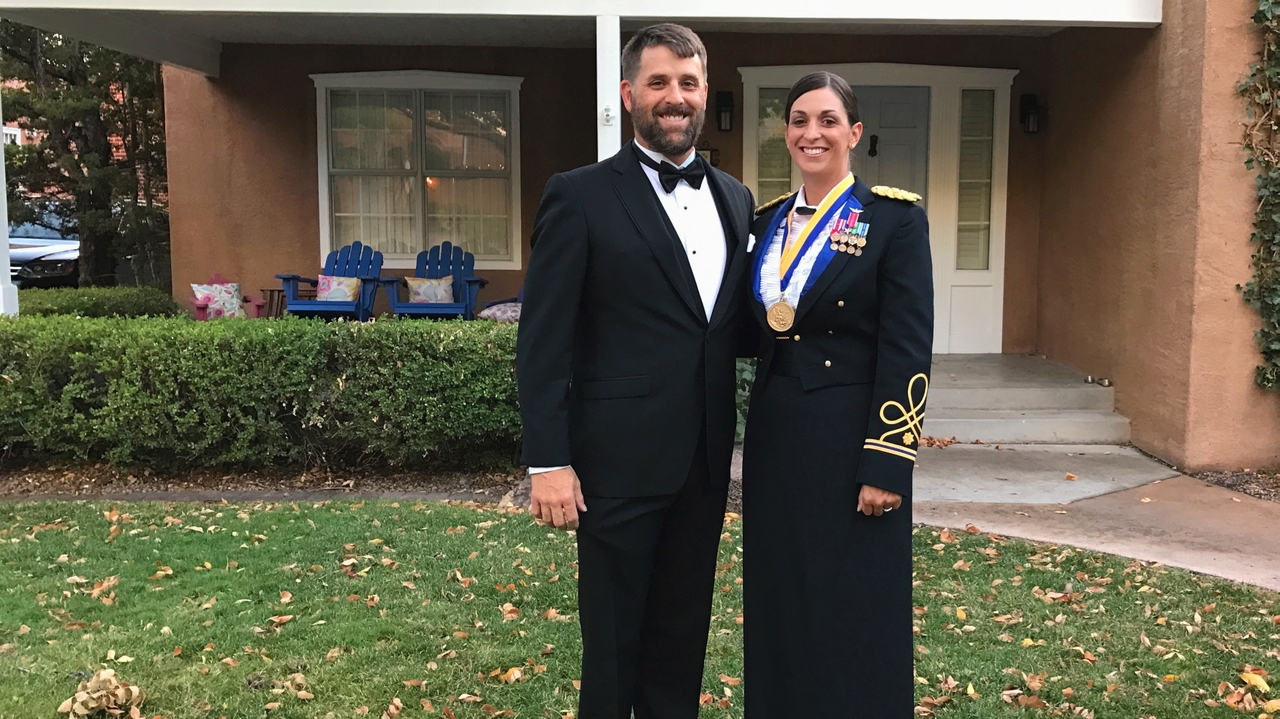 The couple on their way to the 2016 Air Force Ball in Albuquerue, N.M.

Black Hawk pilots defy all odds while building a nest

Roone and Alissa McKaig share more than a love for aviation, they share a home, a deep commitment to the U.S. Army and a special connection to The University of New Mexico.

I recently met the unique couple who works day in and day out to support our Lobo community. With matching helicopter licenses, I knew better than to ask a husband and wife team, who is the better pilot. As it turns out, after they told me their story, I knew the answer without asking.

“The first five years of our marriage we spent at least half the time apart,” said Roone McKaig, helicopter pilot and husband to Lt. Col. Alissa McKaig. “I missed our daughter’s birth. I was in Egypt at the time and had a flight the next day, but she went into labor. I told her to wait,” he said with a grin.

What would cause a riff in most couples—time apart, dueling careers, demands of family, is just the norm for these two pilots. The secret to their success as a couple isn’t just a commitment to each other, but a commitment to our country.

Roone McKaig
Born and raised in Salt Lake City, Utah, Roone joined the Army in 1994. He started his aviation career as a Chinook mechanic for six years in a special operations unit.

“I was tired of sitting in the back, so I applied and was accepted to flight school in 1999. I left flight school flying UH-60 Black Hawks,” he said. “I’ve been on various assignments: Iraq, Korea, Egypt, Fort Rucker, Fort Hood.”

“I thought it was cool to fly because that’s what my dad does, so that’s what I put in for and got." — Alissa McKaig

Roone first met Alissa while he was stationed at Fort Hood. She was a platoon leader at the base, but after developing a friendship, the two were separated.

“We had just missed each other in flight school,” said Roone. "We met at Fort Hood, Texas. From there we both deployed to Iraq. When I left Iraq for Korea, Alissa remained and redeployed with her unit. Our paths crossed again, when she also got stationed in Korea about eight months later."

Alissa McKaig
While growing up in New Jersey, Alissa became familiar with the ins and outs of the service as her father rose through the ranks of the Army National Guard. He was also a pilot with a passion for flying.

After high school, it was her father who encouraged her to take advantage of an Army ROTC scholarship and she did, at James Madison University in Virginia.

After college, Alissa entered the Army as a commissioned officer. When it came time to choose a profession in the service branch, her father also influenced that decision.

“I thought it was cool to fly because that’s what my dad does, so that’s what I put in for and got,” said Alissa. 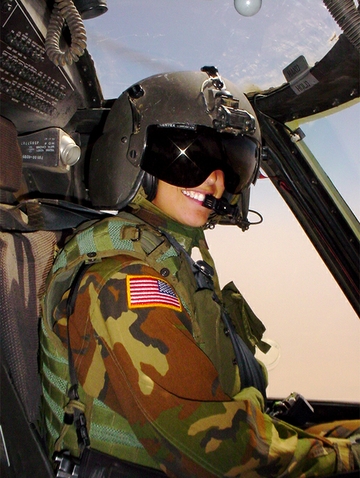 As Roone and Alissa’s careers went in separate directions, their hearts decided on the same path. After getting married, Roone was stationed at Fort Rucker as a pilot instructor while Alissa took the opportunity to attend graduate school in San Antonio, Texas.

Grad school eventually lead to a teaching position at West Point Military Academy. Alissa was stationed at the school for three years teaching Spanish to cadets. During that time, the couple started a family.

“I was originally going to join Alissa at West Point, but it ultimately didn’t work out with posts,” said Roone.

He ended up extending a deployment in Egypt and staying 19 months. They finally had the opportunity to live together for a brief period when their first daughter was seven months old.

The couple had two daughters before relocating temporarily back to Fort Rucker. It was there that the couple was presented with an option that allowed for them to call the same state home.

Albuquerque
“We were looking at assignments, and the Army said one was open for Alissa at The University of New Mexico. Being from the Southwest, I knew the area,” said Roone. “Albuquerque is a great location. The altitude makes it nice. I’ve lived in the southwest, and weather-wise, it’s as nice as you can get. “

Alissa ultimately accepted a position at UNM as a Professor of Military Science and is in charge of the school’s Army ROTC Unit.

This move proved different from the others. The closest place Roone could have been assigned is in El Paso, Texas. With two kids and another on the way, he decided that he had spent enough time away from family. So after two decades, he retired from the Army.

“I retired as a Chief Warrant Officer 4 (CW4),” said Roone. “And I haven’t shaved since I left the army,” he laughed.

Together at UNM
Roone found work related to the University as well. He works for Lifeguard, run by Seven Bar Aviation. The company contracts with UNM Hospital for medivac support.

“We do patient transfer,” he described. “We have three airplanes, one helicopter and an ambulance that we transport patients in. We’ll go out on scene calls if there’s an accident on the highway, or house fires—wherever we need to land to pick people up and bring them back.”

Roone enjoys his new career that includes a new support role at home with the kids, while Alissa develops the next generation of Army officers.

“Here at UNM, our Unit produces Lieutenants for the Army,” she said. “My goal for the next year is to get us more campus-wide awareness. People don’t always understand what we do and all the opportunities available for students. The Army ROTC program offers great scholarships and provides a unique leadership experience as we train the Army's next generation of leaders. Our curriculum covers leadership, communication, teambuilding, and critical thinking skills to name a few—even if a student doesn't end up serving a career in the military, they learn important skills that are applicable to any career.”

And Roone agreed, “The impact here, that most people don’t get, is that Army ROTC in four years’ time, basically takes a kid, a civilian, and makes them into an officer, a leader. That doesn’t always resonate, but some of these kids are going to go straight to a Unit—straight to combat from UNM. They could be an infantry platoon leader at a remote outpost by themselves. Taking someone to that level of responsibility out of college is a big deal.”

“My branch manager, when we first got married, looked at us and said, ‘This doesn’t work, one of you will get out.’ We proved him wrong."  — Roone McKaig

It’s that passion and respect for the Army, that has strengthened the bond between the McKaigs. They found being married to one another has built a special understanding, a support system for each other’s daily challenges.

“From my point-of-view, it was nice because I could come home and bounce things off of her and she does the same thing,” said Roone. “Instead of the typical military marriage where one spouse is in the service, we both are, so we understand what goes on at work.”

But there are challenges for married military couples.

Roone added, “My branch manager, when we first got married, looked at us and said, ‘This doesn’t work, one of you will get out,’ and 99 percent of the time it’s the female. And I look back at that now. We proved him wrong."

“I did retire, but I could have kept going. I liked what I was doing, but being with my family, supporting Alissa, was important.”

I couldn’t help to wonder if they worried about each other, when the other is flying. They quickly and quite unexpectedly answered my question at the same time; “No.”

“If she went on a flying assignment, I was confident,” said Roone. “Less aviators get injured than ground personnel. It’s safer to fly than it is to drive. When she was in Iraq, at one point, she drove around in a Humvee and I was more worried about her then, then anytime she flew.”

He added, “Females make really good pilots. They have great control touch. Men are like gorillas.”

The compliment from Roone, was not only loving and supportive, but also genuine. As Alissa rose through the ranks of the leadership side of the Army, he rose through the warrant officer ranks, overseeing the standardization of the Black Hawk training at flight school with around 800-900 students, plus 300 flight instructors, before this retirement.

Albuquerque might not be the last stop for the couple as Alissa has recently been selected to serve as a Battalion Commander, but it has no doubt been one of the most special according to her.