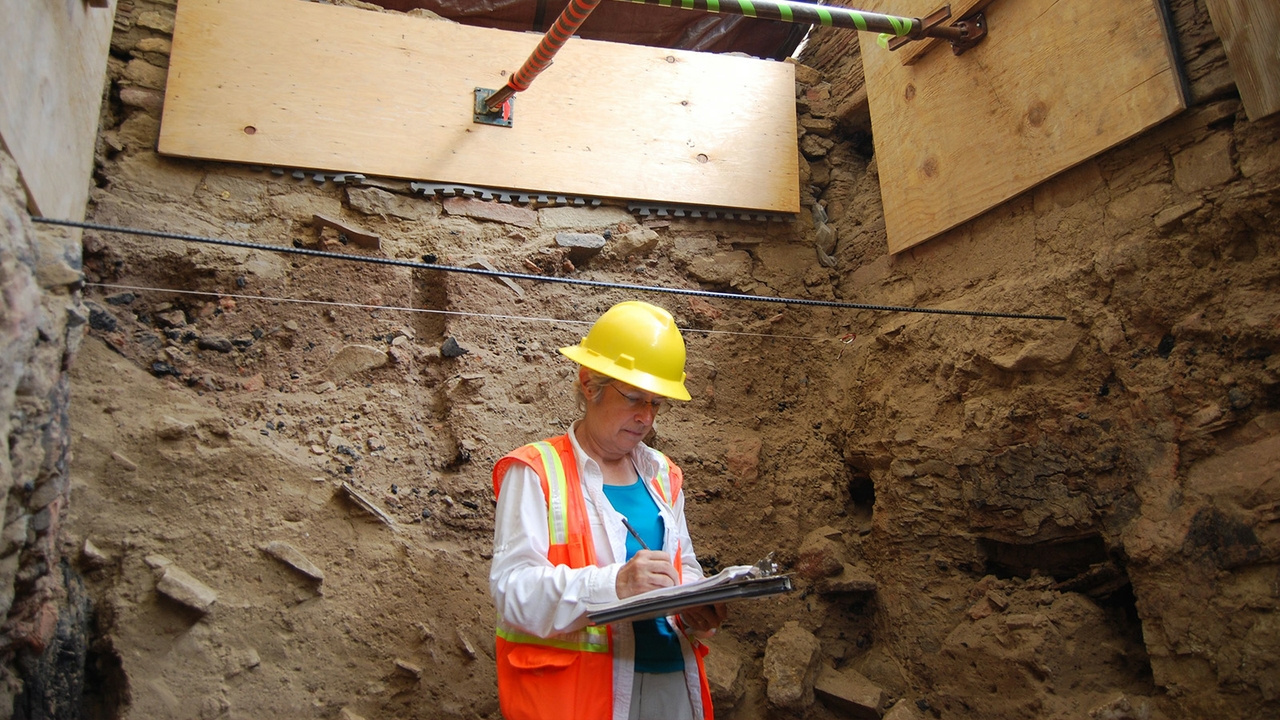 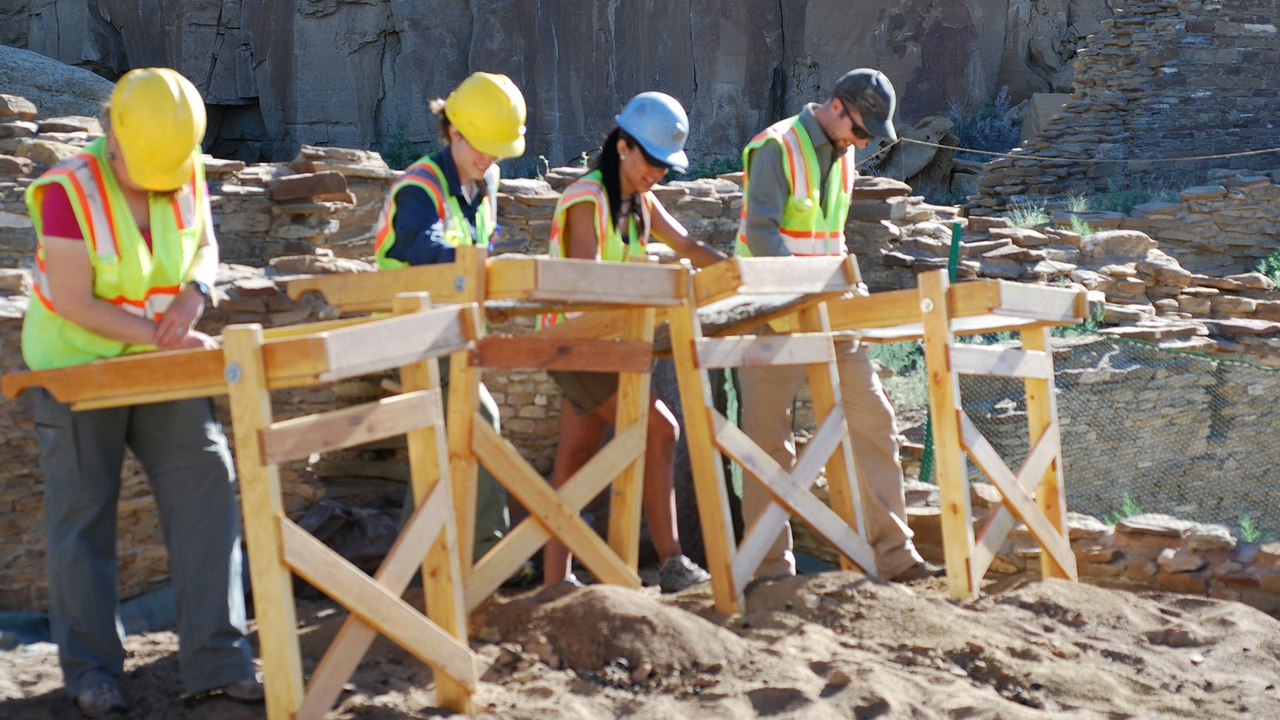 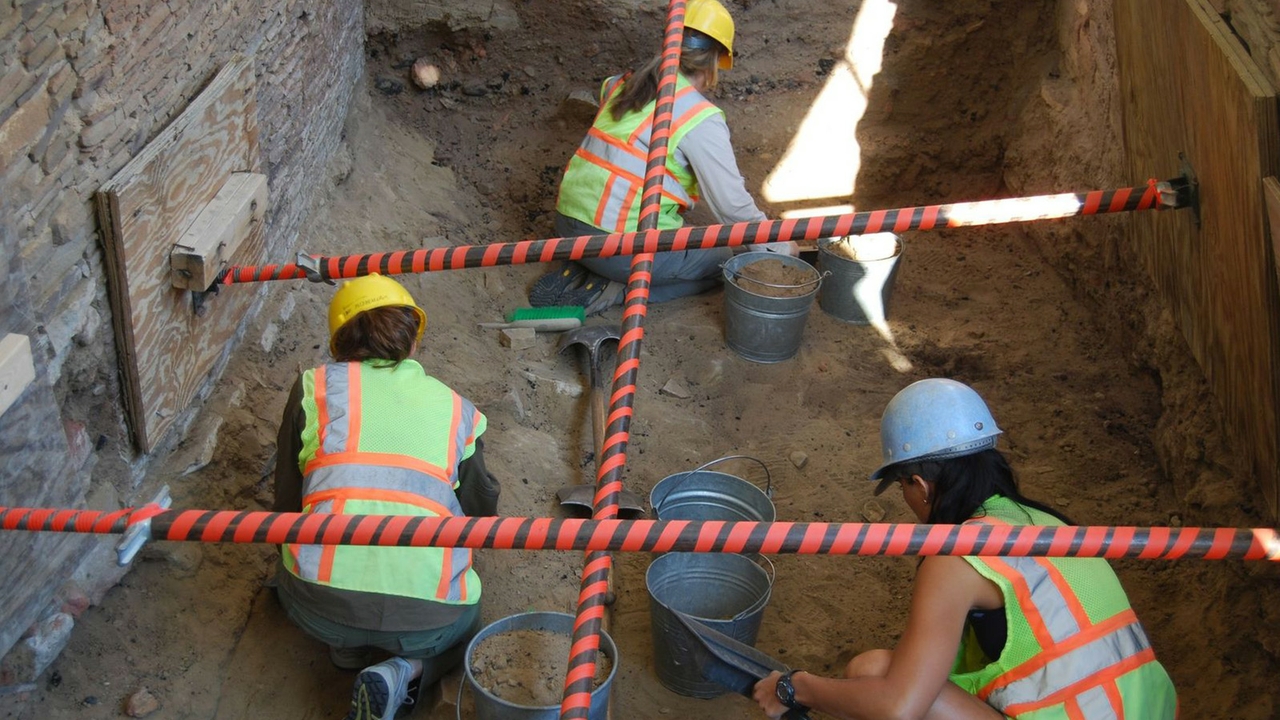 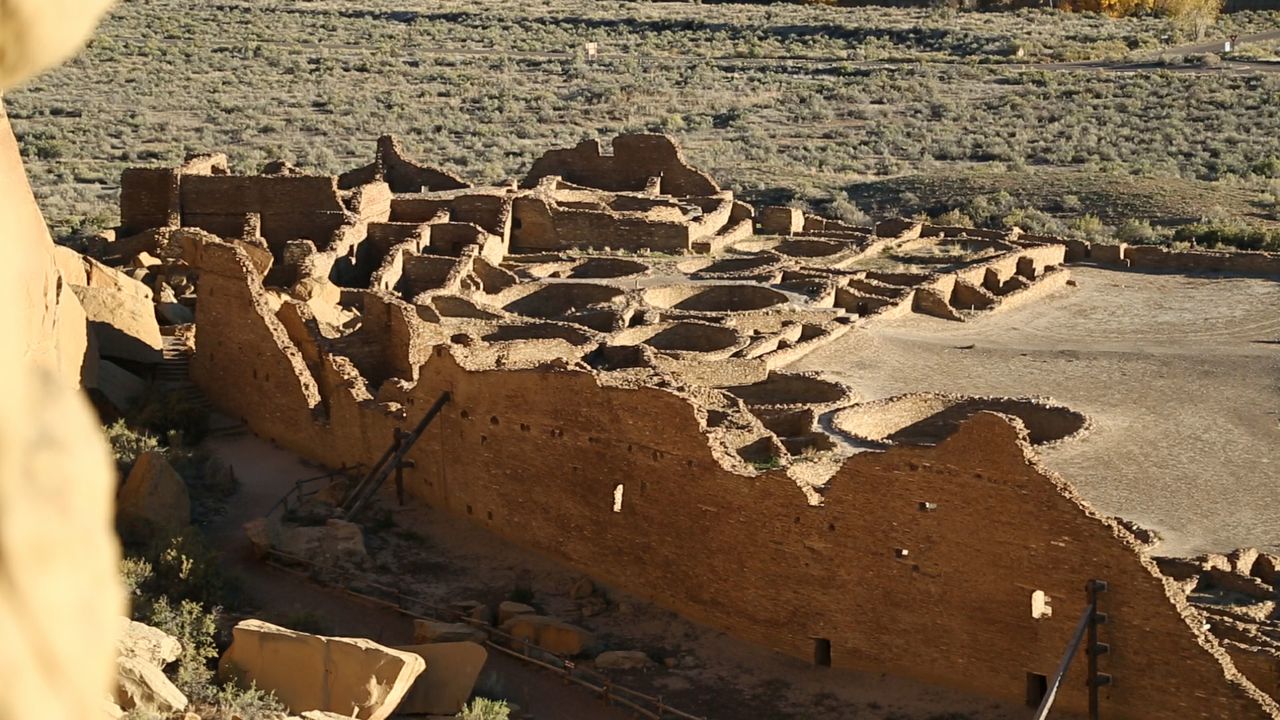 In 1896, a team known as the Hyde Exploring Expedition began excavating Pueblo Bonito in Chaco Canyon. As they worked, they numbered the rooms, including one they labeled Room 28, which had a burned roof and walls. They were about to move on to excavate other rooms when a worker uncovered a distinctive cylindrical jar. In the next few days, the team went on to find 174 cylinder jars and other pottery under the burned debris before they proceeded to excavate other rooms. Of only about 200 known Chacoan cylinder jars in museums, 112 of those came from Room 28. 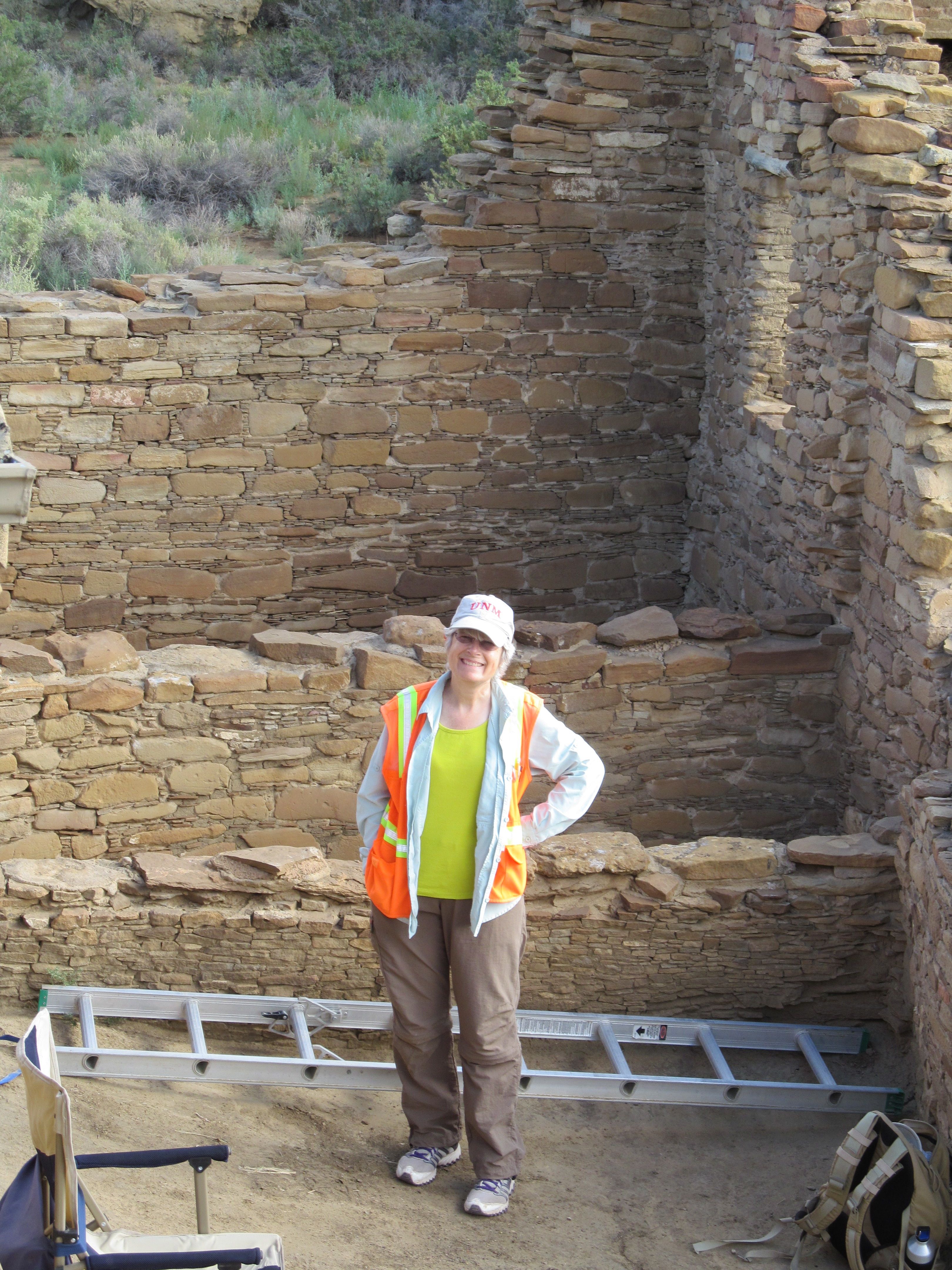 In 2009, Patricia Crown, Leslie Spier Distinguished Professor of Anthropology at The University of New Mexico, and her collaborator, nutritional chemist Jeffrey Hurst, found residues in the cylinder jars of drinks made from cacao, the beans of the tropical Theobroma tree used to make chocolate. Their research revealed the first evidence of chocolate north of the US-Mexico border and possibly linked Chacoan rituals surrounding cacao use to Mesoamerica. Crown had been studying the cylinder jars for a decade, and the residue analysis indicated how they were used. But questions remained about why so many were placed in Room 28, and when and why the room burned.

These lingering questions led Crown to propose reopening the room to the National Park Service. After a rigorous multi-year consultation and review process, “I got a permit from the National Park Service to reopen Room 28, meaning we had six weeks in the summer of 2013 to remove all of the fill, record everything we found, do some new excavations below the floor, and then the park filled it back in again.” The re-excavation project was funded by the National Geographic Society, the National Endowment for the Humanities, and the Friends of Chaco.

Crown continued: “There were a lot of unanswered questions about the room: when it was built, why there were so many pots and other artifacts left in it, why and when it burned. We could see in the 1896 photographs that there were charred wooden posts in the room, so we hoped those had been left, providing us with a way to date the room… We discovered why the cylinder jars were left in the room and how the room burned. We also recovered many artifacts, animal bones, pollen, and plant remains that were analyzed, mostly by UNM students and faculty.”

In a new book edited and co-authored by Crown titled The House of the Cylinder Jars (UNM Press, 2020), she details the archaeological excavations she led in Room 28 in Chaco Canyon in 2013, with a group of students and faculty from UNM, and the subsequent analysis of the materials they recovered.

"We discovered why the cylinder jars were left in the room and how the room burned. We also recovered many artifacts, animal bones, pollen, and plant remains that were analyzed, mostly by UNM students and faculty.”

The House of the Cylinder Jars documents the re-excavation of Room 28, its architecture, and places it within the context of nearby rooms in Pueblo Bonito. Chapters provide a complete analysis of the artifacts found in 1896 (curated at the American Museum of Natural History and the National Museum of the American Indian) and 2013. Several of the contributors are from UNM, including:

As well as scholars who are not affiliated with UNM: Susie Smith (pollen), Karen Adams (archaeobotanical remains), and Laurie Webster (textiles).

Crown said that the excavations showed that when the use of the jars ended around A.D. 1100, they were piled on shelving and around the room, the doors were blocked, and someone, perhaps ritual specialists, sprinkled turquoise and shell ornaments over the vessels and lit a fire under the shelving. The room burned and the two stories collapsed, putting the fire out and covering the jars.

Jones, along with UNM zooarchaeology lab students Ainsworth and Franklin, worked on the animal remains that were recovered from the room. They contributed Chapter 7, called Fauna from Room 28. Ainsworth is currently a Ph.D. student in the archaeology program, and Franklin, who has a MA in Public Archaeology, is the archaeologist for the Southwest Jemez Mountains Collaborative Landscape Restoration Project in the Santa Fe National Forest.

“Do they reflect what people at Chaco were eating? Did they have symbolic significance for Chacoans? Or were they present for other reasons – for instance, because they burrowed into the backdirt from earlier excavations? Caitlin, Stephanie, and I, working together, determined that all three of these possibilities were likely true. Some of the rabbits do seem to have been straightforward food, as do some of the rodents. Many of the birds likely reflect ritual during the occupation of Chaco. And many of the rodents, and some of the rabbits, probably did make their way into the assemblage through burrowing,” Jones said.

Conrad wrote chapter 8, Eggshells and Gastroliths from Room 8: Turkey Husbandry at Pueblo Bonito. In his research at Chaco Canyon, he examined eggshells and gastroliths  ̶  stones swallowed by birds and held in the gastrointestinal tract to aid digestion  ̶  uncovered in the debris. He found that “Ancestral Pueblo people clearly exploited, husbanded, and managed domesticated turkeys at this site, while also exploiting wild forms” and Pueblo Bonito may have functioned as a turkey pen.

“This volume really represents what is so special about archaeology and anthropology: collaborative, integrative and innovative research. Patty and her colleagues’ long-term collaboration and consultation with Native American communities and the National Park Service facilitated this research and allowed for a suite of experts to work on an intensive study of objects and items specific to Room 28, but representative of Pueblo Bonito, Chaco Canyon, and the Ancestral Pueblo world more broadly. An extremely thorough historical examination of the history of archaeology in this specific room, combined with Patty’s excavation of the room itself, allowed each of us to place our findings in a more complete context, almost like fitting pieces of a puzzle together. We now have a clear record of past human activities in Room 28, and this helps us untangle past human experiences at Pueblo Bonito and throughout Chaco Canyon. I suspect this book will broadly serve the archaeological community, and will lead to future studies emulating this work,” Conrad remarked.

The House of the Cylinder Jars is scheduled for release in December and can be purchased from UNM Press and other booksellers.

Video by Marina Bernal/Advance at UNM