By Tamara Williams June 25, 2015
Categories: Inside UNM School of Law

The NMLR special issue analyzing legal issues related to “Breaking Bad” has catapulted the student-edited law review and the UNM Law School into the international limelight.

“Breaking Bad” creator Vince Gilligan nailed it by autographing a copy with, “To the 2014-15 NMLR Editorial Board…You are the ones who knock!!!”

Over the past few weeks, over 250 media outlets worldwide have reported on the special issue, which explores the war on drugs, the hypothetical arrest of Walter White, police practices, morality and the law, attorney-client communications, and more.

Matthew Zidovsky, editor-in-chief for the “Breaking Bad” issue, says the editorial board is pleasantly surprised and grateful for the positive feedback and media coverage. “We are thrilled that the academic scholarship published in the issue engages such a wide array of readers,” he adds.

The news was initially reported by Jacob Gershman in his Wall Street Journal blog on May 18. Gershman reported that “the legend of Walter White has passed into TV lore, but Heisenberg hasn’t left the stage. The chemistry teacher-turned-meth kingpin is the star of the current issue of the New Mexico Law Review, which published a special edition dedicated to ‘Breaking Bad.’”

The WSJ blog was picked up by other media outlets, and New Mexico publications and TV stations also reported on the special issue. 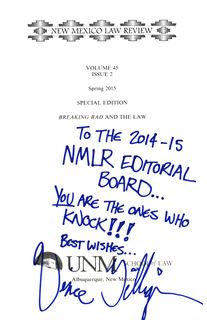 ‘Breaking Bad’ creator Vince Gilligan autographed a copy of the New Mexico Law Review’s special issue, which is on display in the UNM Law Library.

The AP article was featured in law blogs and in major print and online publications, including the New York Times, Esquire, US News & World Report, and Salon. It spread all across the U.S. – from the Seattle Times, to the Tuscaloosa News, to the Boston Herald and dozens more. It jumped across continents – from the Malta Independent to the Lebanon Daily News to the China Post and the New Zealand Herald.

Emil J. Kiehne’s law blog says the issue is an answer to criticisms about law review articles being boring and theoretically-focused, calling it “an issue with articles that lawyers and judges might actually want to read.”

In June, “Late Night Live,” an Australian talk show, featured NMLR editor-in-chief Matthew Zidovsky and two of the authors in a 20 minute interview.  They discussed the media attention and many of the themes of the special issue, including how the Skyler White character is “stuck between a rock and a meth cooking husband” and the lessons one can learn from how Walter White negotiates.

“This special issue has been well-received and discussed positively in various national and international outlets,” says NMLR faculty advisor Professor Dawinder "Dave" Sidhu. “It is difficult for journal members to improve their publication and raise the profile of their law school in just one year, but the journal board and staff have accomplished this remarkable feat.”