Brody’s the name, fraud's the game

You are a mild-mannered college professor teaching accounting at the University of New Mexico Anderson School of Management, when one day you get a call that sets your career on a somewhat new path, and puts the word sexy in accounting. This is the story of Professor Richard Brody and how he became part of the intriguing world of forensic accounting.

Brody used to cringe every time someone would ask what line of work he was in. He didn’t want to be pegged as the stereotypical accountant. But the Hollywood image of quiet bean counter, smart, but no charisma, poring over stacks of ledgers and crunching numbers all day has changed.

“The boring accountant theme was so pervasive it was hard to get students interested in this line of work,” Brody said. “But then, the high-profile fraud cases of the last decade like Enron, WorldCom and Bernie Madoff happened and business schools across the country, including UNM, saw a surge in enrollment numbers; a good thing because accounting was suffering. So while those cases were negative in nature, they created an allure for financial investigative work, and brought a little sexy to the profession as well.”

Forensic accountants and white-collar crime
If the idea of putting a white-collar criminal behind bars sounds exciting, then forensic accounting might just be for you. Forensic accountants use finely honed skills to investigate fraud or embezzlement, and then analyze and interpret the financial information for use in legal proceedings, where they often testify as an expert witness. They can work in public practice or be employed by insurance companies, banks, police departments, government agencies and other organizations.

Brody teaches forensic accounting and fraud examination classes at ASM, which also offers classes that focus more on information technology skills, like digital forensics. But he said that the majority of his students want to pursue a career in fraud.

Interim Dean Craig White said, "We are fortunate to have Rich as a member of the faculty. He is a great resource for the Anderson School and the community. Rich is a nationally known expert in fraud and forensic accounting who instills an excitement in the students to learn more about the field."

Working with the FBI and Secret Service
About 10 years ago, Brody got a call from a local attorney that needed help on a fraud case. The collaboration went so well, other attorneys began enlisting his help. Accordingly, Brody decided to start a litigation support practice.

“I never dreamed that I’d be working with the FBI and the Secret Service,” Brody said. “These guys were untouchables to me as a kid, my heroes. To this day, I have to pinch myself because I can’t believe I’m doing this. I feel fortunate that I fell into this line of work just when it was getting hot. Albuquerque is a small town and there still aren’t too many people doing this type of specialized work. So I’ve built a reputation for myself in the last decade.”

It is not the job of forensic accountants to state that fraud was committed, though often, according to Brody, the evidence clearly suggests that it was. They simply present the evidence to judges and juries and let them decide.

The imposter that would be Howard Hughes’ son
“The most interesting case I had involved a guy who claimed he was the illegitimate son of Howard Hughes,” Brody said. “He used this persona to get people to invest in all kinds of scams he was running; and he swindled millions of dollars from them, including a victim in New Mexico. The fraudster had the most amazing documentation to support his fictitious investments, so it wasn’t all that surprising that the person I represented lost millions to him over a period of years. I’ve learned that a fraudster can be anyone. A victim can be anyone. The fraudster looked like a regular guy. The victim was a smart, savvy businessman, a self-made millionaire. You’d never think he could be taken.”

The Hughes case is an example of white collar crime, crimes typically committed by business or government professionals that engage in fraud, insider trading, embezzlement, cybercrime and more, destroying companies and individuals and ultimately, families. But what happens when murder occurs during these cases? 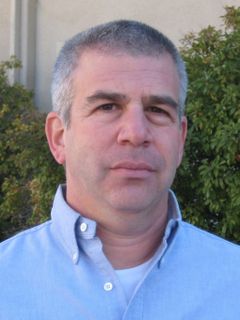 Red collar crime
“My frequent co-author, Frank Perri, is a public defender in the Chicago area. He coined the phrase ‘red collar crime’ after a client, who was committing identity theft, killed his wife. She had found out, told him to stop or she’d report him and he killed her,” Brody said.

Brody and Perri co-authored a paper on red collar crime: white collar crime that turns deadly. Brody visits law enforcement across the country suggesting that there may be a link, possibilities that haven’t been considered, to the score of unsolved cold cases.

“Frank and I are probably the only two people in the world currently writing about red collar crime,” Brody said. “I’ve presented the theory to the Illinois and New Jersey Attorney General's Offices.” Brody has also worked with the U.S. Secret Service, the U.S. Department of Justice and the Second Judicial District Attorney's Office in New Mexico.

Brody in the classroom
Brody said that his litigation support practice makes him more effective in the classroom. Because he’s worked both civil and criminal cases, appeared before lawyers and judges, it is no longer necessary to bring in as many experts as he did in the past. “It makes teaching a little easier for me,” he said. “But I certainly take advantage of the great opportunities we have in New Mexico: the FBI, the Secret Service, the U.S. Attorney General’s Office, just to name a few, who are more than happy to come speak to our students. I don’t know anywhere else in the country where students are exposed to speakers of this caliber on a regular basis. So it’s a great system for them.”

Brody is the Douglas Minge Brown Professor of Accounting at UNM and a Daniels Fund Business Ethics Fellow. In 2012, the Association of Certified Fraud Examiners (ACFE), the world's largest anti-fraud organization and premier provider of anti-fraud training and education, honored him with the Educator of the Year award. In 2013, the membership of the ACFE elected him to the Board of Regents.