He’s a cartoonist but also a writer: Lalo Alcaraz, the cartoon king, is visiting The University of New Mexico on Thursday, March 1, at 5:30 p.m. in Woodward Hall. Alcaraz is one of the most prolific Chicano artists in the nation. His politically charged satire is unapologetically engaged. 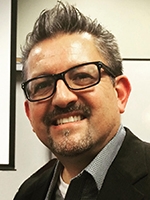 Alcaraz is the creator of the first nationally syndicated, politically themed Latino daily comic strip, La Cucaracha, which is distributed by the Universal Press Syndicate. His work has appeared in The New York Times, The Village Voice, The Los Angeles Times, Variety, Rolling Stone and Los Angeles Magazine, among many others.

The talk is timely coming on the heels of a controversial cartoon included in the Albuquerque Journal recently that represented to many a disparaging and racist impression that depicted “Dreamers” as dangerous gang members.

This reception, panel presentation and discussion is part of The US-Mexico Border: Place, Imagination, and Possibility, an exhibition at 516 ARTS and the Albuquerque Museum with citywide public programs presented by UNM Art Museum & 516 ARTS.

Admission into the museum is free and open to the public, a $5 donation is suggested to support exhibitions.