Caves elected to membership in the National Academy of Sciences

The National Academy of Sciences (NAS) has announced the election of University of New Mexico Distinguished Professor Emeritus and Research Professor of Physics and Astronomy Carlton Caves as a member. This prestigious honor is one of the highest accorded to scientists and is given in recognition of distinguished and continuing achievement in original research.

Caves is UNM’s fifth selection to the prestigious group since its inception in 1863. He is one of 120 new members and becomes part of a select group of more than 2,400 active members in the NAS. Approximately 190 of those selected have received Nobel prizes. The election of new members is by current members based on outstanding achievement and commitment to service.

"What a well-deserved honor this is for Dr. Caves – the culmination of a long and distinguished career, as well as a professional acknowledgement of his groundbreaking research, innovation, and service," said UNM President Garnett S. Stokes. "Membership in the National Academy of Sciences is one of the highest honors conferred on scientists, and we salute Dr. Caves for his remarkable accomplishment. We're proud of him, and of the cutting edge research he's conducted here at UNM." 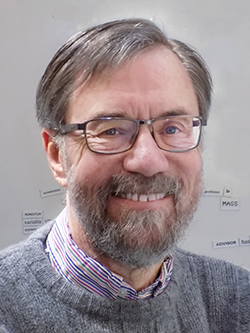 Caves conducts research in the burgeoning field of quantum information theory and quantum computation and has been a pioneer in the field for nearly 40 years. Related areas include the theory of open quantum systems and decoherence, nonlinear dynamics and quantum chaos and theoretical quantum optics.

“I am a theoretical physicist, and my election to the Academy is, generally, recognition of a sustained series of contributions to quantum metrology, the science of making the best possible measurements in the presence of quantum uncertainties, and, specifically, acknowledgment of an idea I had in 1981 for making interferometers more sensitive,” said Caves.

"Carlton Caves has made extraordinary contributions to both the theory and practical application of ideas in quantum information and quantum optics,” said UNM Provost and Executive Vice President for Academic Affairs James Holloway. “His election to the National Academy of Sciences is a career-capping honor in a long list of honors and awards he has received for his work.

“For a US scientist, this election is considered perhaps the most prominent national honor. Professor Caves is still actively working and publishing, and contributing to the frontiers of human knowledge. Congratulations to Professor Caves!”

Caves is the founding director of UNM’s Center for Quantum Information and Control (CQuIC), a research center co-located at The University of New Mexico in Albuquerque and the University of Arizona in Tucson. Research at CQuIC is focused on the control of complex quantum systems with an aim to make quantum systems march to scientist orders, instead of doing what comes naturally.

CQuIC’s research is organized as quantum information and computation, quantum control and measurement, quantum metrology, and quantum optics and communication, with extensive theoretical and experimental research programs in all these areas.

Caves’ current research is focused on various topics drawn from quantum information science and quantum metrology, and he works on these topics with colleagues at UNM and around the world. Just at present, he is working with two postdocs at UNM’s Center for Quantum Information and Control.

Caves and Rafael Alexander are investigating a technique, called quantum illumination, for detecting a faint target against a bright background using fundamental quantum effects, Additionally, he and Christopher Jackson are developing a general theory of the classical limit of quantum systems, which goes under the name of generalized coherent states.

The National Academy of Sciences is a private nonprofit institution that provides expert advice on the most pressing challenges and the world. It was founded when President Abraham Lincoln signed a congressional charter forming the NAS as an independent adviser on scientific matters.