Quantum information science is going to change the world. Being able to manipulate and control individual atoms and other microscopic systems to do jobs in communications, sensing and computation will have an impact on nearly every aspect of our daily lives. And, for the University of New Mexico’s Center for Quantum Information & Control (CQuIC), a new multi-million-dollar grant will allow UNM to continue at the forefront of this innovative field.

“Our particular emphasis is on control of the behavior of quantum systems,” said Carlton Caves, Distinguished Professor of Physics & Astronomy and the Center’s director. “Broadly speaking, we are involved in trying to make systems at the microscopic and nanoscopic level do jobs that we want them to do, instead of just doing what comes naturally.” 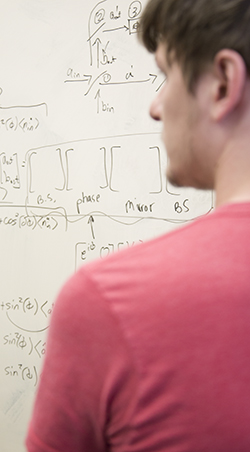 The $2.2 million, five-year award from the National Science Foundation makes CQuIC a Focused Research Hub in Theoretical Physics, one of only two in the United States. It’s not only an exciting designation, but it will allow UNM researchers the opportunity to delve more deeply into quantum science and to make new progress toward the goal of quantum computing.

“The competition for the FRHTP was stiff,” said Ivan Deutsch, a CQuIC faculty member and Regents’ Professor of Physics & Astronomy. “We are the sole recipients in quantum information. This award lays a foundation for the future of our center.”

To understand what quantum information and computing entails, one must first have an understanding of how current computers operate. Essentially, computers, and the transistors that power them, run on a binary system of ones and zeros – on and off. This binary system follows the traditional laws of logic and classical physics when processing information.

As computers continue to get smaller and smarter, the technology begins to reach its natural limit. Computer chips are now engineered on a nanoscale and are becoming so small they look like individual atoms.  And, while those atoms are capable of incredible computing power, their behavior follows a peculiarly quantum version of logic that requires a new language to describe, the language of quantum physics.

“This quantum world is governed by entirely different laws of physics, which lead to counterintuitive effects. It is a world of quantum logic, where true and false can exist simultaneously in a ‘superposition state’ and where particles are entangled and linked inextricably together,” explained Deutsch. “We have come to understand that this ‘Alice in Wonderland’ quantum world opens the door to new possibilities for information processing power, where computers could break existing secret codes and new quantum secret codes could be developed that are fundamentally unbreakable.  New drugs could even be designed on a quantum computer.” 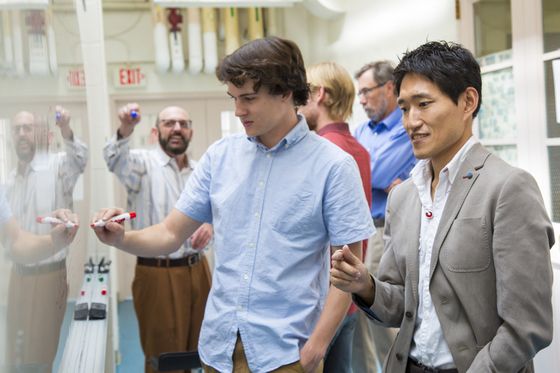 CQuIC, which was formed in 2009, is based at UNM with an extension at the College of Optical Sciences at the University of Arizona. Researchers at the two institutions, along with partners at Sandia and Los Alamos National Labs, work together on both the theoretical aspects of quantum information and with the experimental part of the puzzle. Caves says this cooperation, combined with the new NSF grant, sets CQuIC apart from its competitors and will allow CQuIC’s faculty and students to continue to make serious progress in the field – and, one day, change the world.

A digital rendering of what the future Physics & Astronomy and Interdisciplinary Science center will look like.

As a branch of UNM’s Department of Physics & Astronomy, CQuIC is currently housed in the department’s existing building on North Campus, a facility that’s slated to be replaced by the new Physics & Astronomy and Interdisciplinary Science (PAIS) center.

PAIS, a new state-of-the-art research and teaching center, will be constructed at the site of a former City of Albuquerque water reservoir, just north of Central Ave. between Yale Blvd. and Cornell Dr. The 137,000 sq. foot facility will have research labs, classrooms, office space and modern infrastructure to support projects being done across campus.

Caves says he and rest of the CQuIC’s faculty and students are excited about what PAIS means for the future of the department and, by extension, what the new facility will mean for the future of quantum information at UNM.

“This was a great facility for the 60s and 70s when it was built. But as time has gone by, it’s become harder and harder to accommodate what is now 21st Century science,” said Caves. “So for us, this building really will be a quantum leap into the 21st Century, so we can do 21st Century science more effectively.”

PAIS will provide CQuIC’s faculty with a new, modern space to continue to advance their research. Aside from the improved office space for the theoretical work, the new facility will also provide state-of-the-art lab space that Caves hopes will help attract new researchers to the University.

Because of the nature of their work, the facility must have extremely high standards when it comes to vibration, temperature control and a slew of other factors. PAIS will meet and exceed those needs.

Just as important for CQuIC’s continued growth is the development of collaborative work space within the new facility.

“The other part of it is the innovation that happens when people are working in a space that is conducive to innovation,” said Deutsch. “That means lots of collaborative areas where people can meet and have discussions. It’s all very important to what we’re trying to do here.”

PAIS, which will cost more than $65 million, will be the largest building on main campus. Right now, a portion of the money needed for the facility would come from bonds, with New Mexicans slated to vote on a General Obligation Bond C package this November. With Bond C approval, the facility could be completed by 2019.

“New Mexico has an opportunity to preserve its place as a national hub for quantum engineering technology,” said Deutsch. “UNM has blazed a trail and will continue to be at the frontier. But to remain at the center of discovery and innovation, we really do need a new facility.”