The Center for the Southwest at The University of New Mexico presents a special evening with New York Times climate and science reporter Henry Fountain. Fountain will share from his new book The Great Quake: How the Biggest Earthquake in North America Changed Our Understanding of the Planet on Thursday, Nov. 9, 2017 at 6 p.m. in the Hibben Auditorium on the UNM campus. 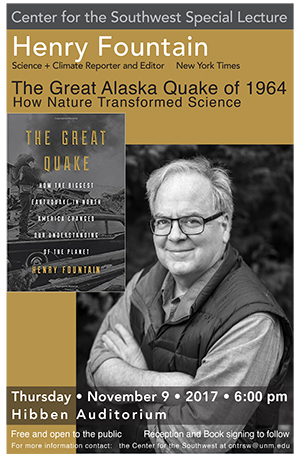 Henry Fountain has been a reporter and editor at the New York Times for two decades, writing about science for most of that time. From 1999 to 2009 he wrote “Observatory,” a weekly column in the Science Times section. He was an editor on the national news desk and the Sunday Review and was one of the first editors of Circuits, the Times’ pioneering technology section. A graduate of Yale University, where he majored in architecture, Fountain worked previously at the International Herald Tribune in Paris, New York Newsday, and the Bridgeport Post in Connecticut.

In the bestselling tradition of Erik Larson’s Isaac’s Storm, The Great Quake is a riveting narrative about the biggest earthquake in North American recorded history — the 1964 Alaska earthquake that demolished the city of Valdez and swept away the island village of Chenega — and the geologist who hunted for clues to explain how and why it took place. At 5:36 p.m. on March 27, 1964, a magnitude 9.2. earthquake – the second most powerful in world history – struck the young state of Alaska. The violent shaking, followed by massive tsunamis, devastated the southern half of the state and killed more than 130 people. A day later, George Plafker, a geologist with the U.S. Geological Survey, arrived to investigate. His fascinating scientific detective work in the months that followed helped confirm the then-controversial theory of plate tectonics. Fountain weaves together science, storytelling, and human drama putting his readers in the midst of the earth at it most ferocious and humans at their finest.

The lecture is free and open to the public. After the lecture a reception and book signing with the author will take place. The lecture is sponsored by the Center for the Southwest and the Department of History at UNM.

For more information about the lecture and other Center for the Southwest programs visit the Center online at www.centerforthesouthwest.unm.edu or email cntrsw@unm.edu. You can also follow the Center on Facebook and Twitter.