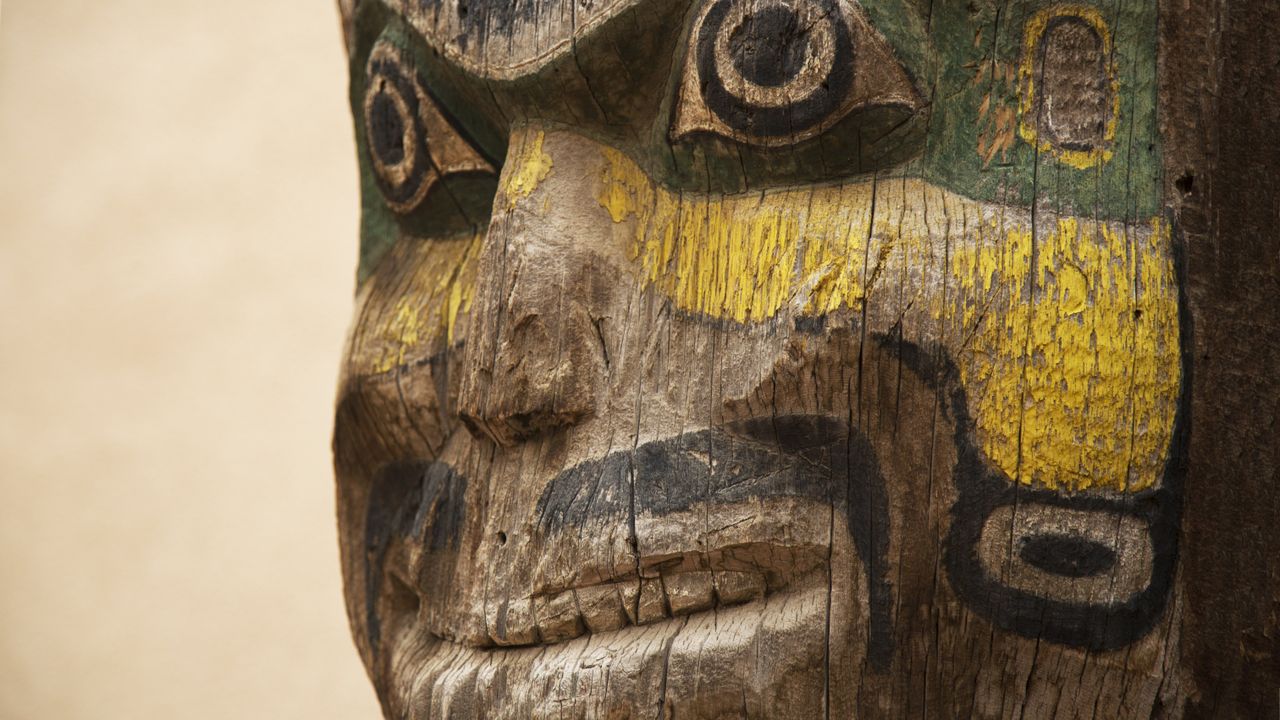 The Smith Family and the Tlowitsis Nation totem pole in the courtyard of the Maxwell Museum before restoration. 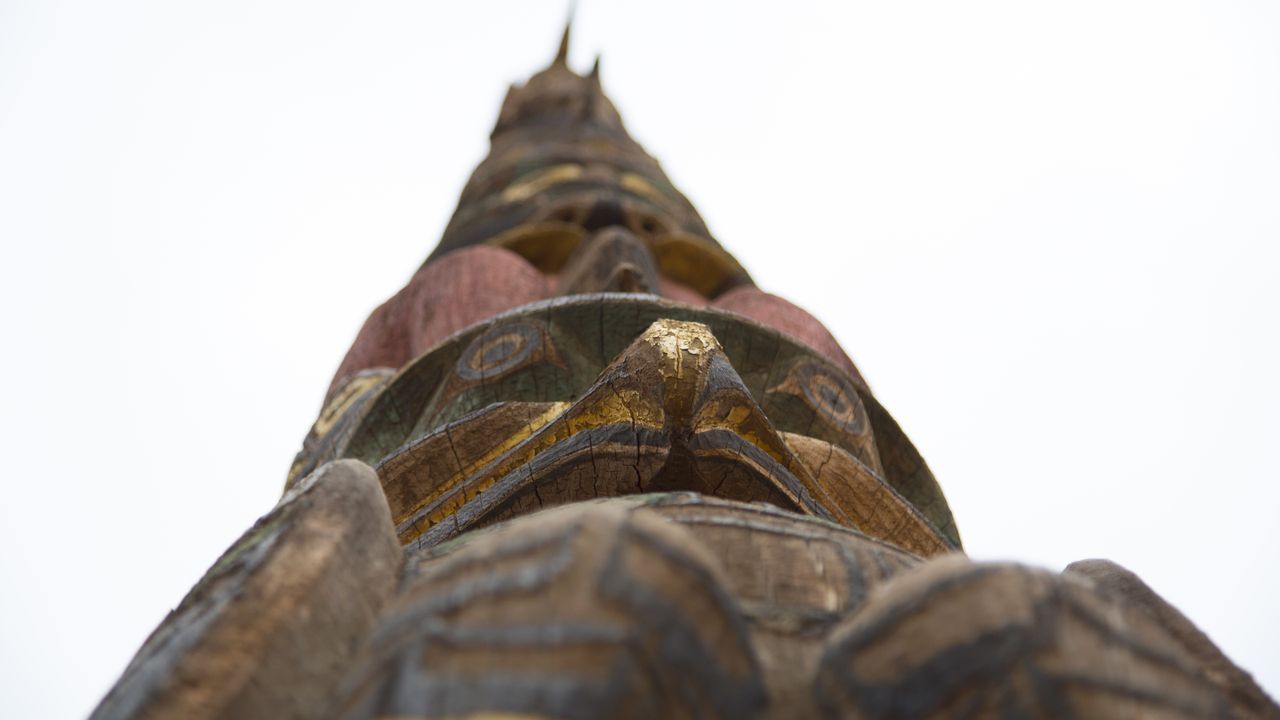 The totem pole is 40-feet-tall and weighs around two-thousand pounds. 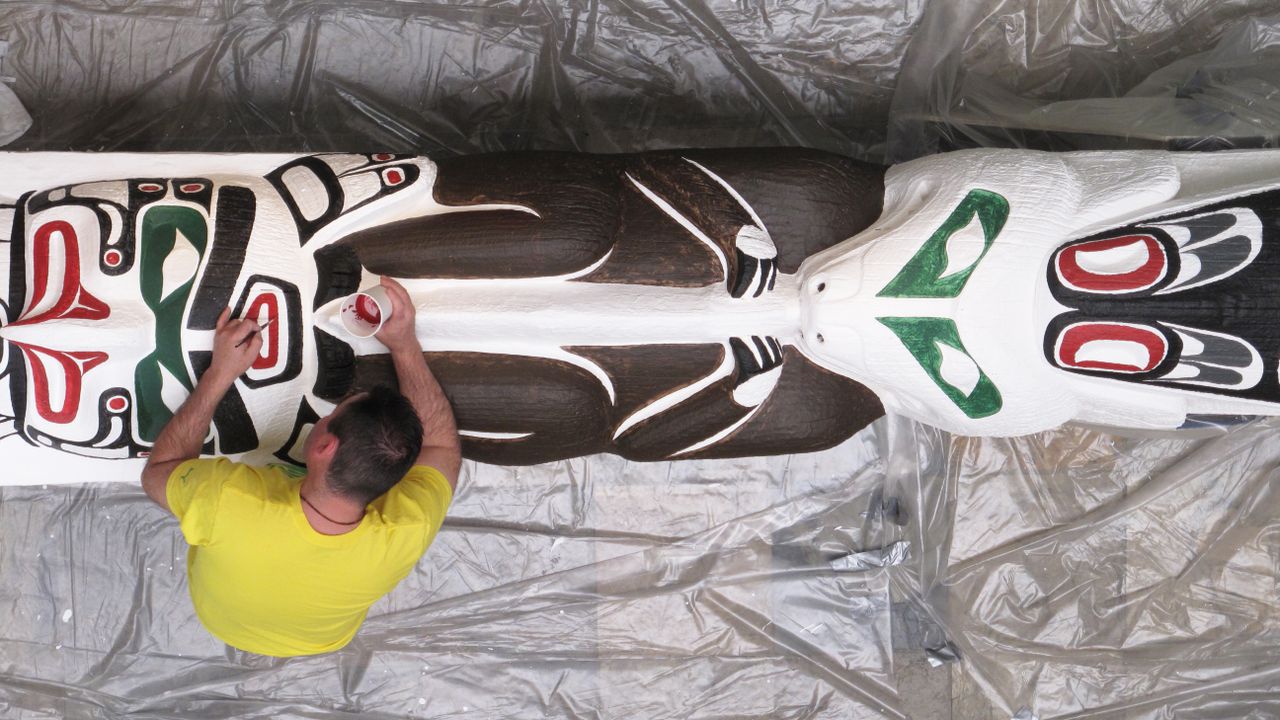 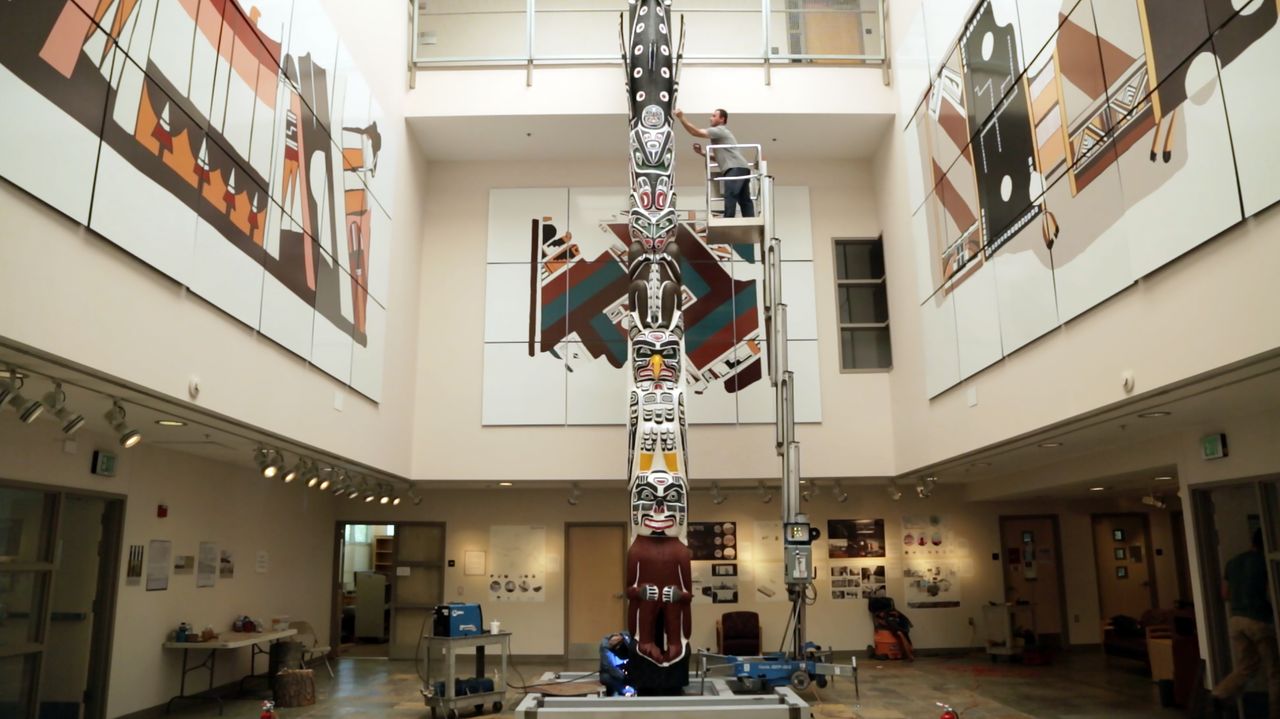 The large, sacred object was moved inside the Hibben Center to protect it from the elements.

In the courtyard of UNM’s Maxwell Museum, a totem pole stood for many decades, weathered by seasons and avian inhabitants. Its beauty and physical condition faded by age, was one concern for university anthropologists—the other, was trying to understand its origins.

Recently, a partnership within the Anthropology Department consisting of Les Field, department chair, Lea S. McChesney, director of the Alfonso Ortiz Center for Intercultural Studies, Dave Phillips, director of the Maxwell Museum of Anthropology, and Blaire Topash-Caldwell, an Ethnology graduate student—all of whom have been involved with other Museum colleagues on the totem pole project—helped shed some light on unanswered questions.

According to the group, “In the 21st Century, anthropology museums must constantly rethink their relationships with communities they portray and from which their collections originate. The key part of the new approach goes to a central question for anthropology museums today: Who owns and controls a people’s heritage? In the case of the totem pole, the answer is now clear—the Smith Family and the Tlowitsis Nation.”

The Smith Family Totem Pole has been in the University’s care for over 70 years. There have been many stories about how the pole originated on campus. Through recent efforts of the Alfonso Ortiz Center, the Maxwell Museum, and UNM’s Anthropology Department, a clearer understanding of its past has emerged.

“The stories swirling around the totem pole have obscured the truth,” said the group. “We now know that the pole originated in 1907 on Turnour Island, British Columbia. Chief Smith Sewid of the Tlowitsis Nation commissioned a now-famous artist, Charlie Yakuglas James, to carve the pole.”

“Parts of the story are still as murky as the water of Turnour Island, however, it’s clear that UNM was complicit in the taking of an important part of Tlowitsis heritage.”

Trying to create a more contemporary, open approach to housing artifacts, the Maxwell Museum now serves only as a repository for the pole, rather than as its owner. In the future, if Smith family members want the pole returned to Canada, they have the power to make that happen. Right now, descendants represented by Tlowitsis Chief Danial Smith prefer the pole to remain at UNM, provided it receives proper care—care it desperately needed.

Restoring the totem Pole
Initially, the totem pole was displayed in front of Scholes hall until 1973 when it was moved to the Museum courtyard, “displayed in isolation, without any interpretation or context.” In its outdoor setting, the pole was deteriorating.

A decision was made to move the totem pole inside the Hibben Center, across from the Maxwell Museum entrance. The Center, home to the University’s Anthropology Department, has a sizable atrium big enough to house such a large, sacred object.

At 40-feet-tall and weighing over two-thousand pounds, it took UNM Physical Plant workers over seven hours to secure, hoist and move the pole.

Before it was moved into the Hibben Center for restoration, the pole spent 336 hours in a cold storage chamber for fumigation.

Once in the atrium of the Hibben Center, conservators stabilized the paint and removed debris left in the pole by woodpeckers and other pests. They worked diligently to get the pole ready for master carver Tom Hunt Jr., and apprentice Bertram Smith of the Tlowitsis Nation.

The Kwakwaka’wakw carvers spent weeks working to restore the pole—filling missing areas of wood with wood plugs, carving new elements that were missing, and working with students, staff and faculty to prime and repaint the pole.

“The descendants have also asked UNM to acknowledge the pole’s origins and its continuing relationship to the community,” the group added. “The new location makes it easier to provide a full interpretive context for the pole, contributed by the community and the involved faculty and staff of the museum and department.”

The University is helping that effort by involving both a traditional master and apprentice carver in the restoration, and also providing a 3-D LIDAR scan, accompanied by photogrammetry of the pole, that together provides the exact dimensions and details of the original.

Field, McChesney, Phillips and Topash-Caldwell all agreed, “What we learn from this process will help us crate a blueprint for all of the traditional cultural items in UNM’s care, and contribute to the renewed vitality of Tlowitsis and Kwakwaka’wakw peoples.”