When Faculty Senate met last month to vote to designate Chicana and Chicano Studies a department, more than 100 people congregated in the hallway waiting anxiously to hear the result of the vote. When it was approved, the crowd erupted in jubilation. No one was happier than Director Irene Vasquez.

“It has been a process that began in 2011 when we developed our strategic plan,” she said. It started with developing the undergraduate program, building a major and then departmentalization. It doesn’t mean that Chicana and Chicano Studies is sitting contently by. “Our next goal is to develop a graduate program,” Vasquez said.

Major and minor players
The major was established in the fall of 2013. “We now have 25 majors and 15 minors. Seven Chicana and Chicano Studies minors are graduating in May. Of the seven, three are applying to graduate school at UNM and elsewhere,” Vasquez said, adding that 40 percent of their students are interested in post-graduate education and 20 percent are interested in professional programs.

Vasquez is quick to note that their growth doesn’t come at the expense of other departments. “We work across campus, cross-listing courses and collaborating, not taking others’ students.”

Departmentalization doesn’t come with extra revenue, but Vasquez and the faculty are planning strategically for a shift in the economic picture. “We need more faculty lines. We have 20 affiliated faculty – a reason we can offer a major. We plan to ask senior faculty to move part of their line from their home department to Chicana and Chicano Studies. If two did that, we could acquire a fulltime faculty member,” she explained, adding that Arts & Sciences Dean Mark Peceny has identified a tenure-track faculty line for the department for 2017.

Vasquez created a community advisory board that also includes faculty. “They have been a critical asset in planning and development and in providing support and feedback. They also suggest and plan courses and programs.”

Ethnic studies as a pathway to success
“Our program helps students envision a path to graduate school or a post-baccalaureate program,” she said. Vasquez explained that many students don’t know about ethnic studies programs. “Those who do tend to have leadership skills they use on campus and in the community. Our students are actively engaged,” she said.

Vasquez gives a lot of credit to the faculty. “Chicano Studies faculty see themselves as more than instructors, but also as mentors and advisors. They use their time inside and outside of class to help students succeed. That is the biggest contributing factor to the program's positive outcomes."

Communication, critical thinking and cultural inclusiveness are a part of all the classes. “Those skills strengthen students’ leadership capabilities and confidence. They go into education, law, work for non-profit institutions, government, the arts and business,” she said. 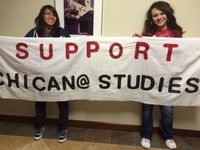 Olivia Romo: Taoseña poet
Olivia Romo graduated from Taos High School in 2011. This May she is graduating from UNM with a degree in English and Chicana and Chicano Studies. She has already applied to the UNM School of Law, other law schools and to the UNM master’s in fine art (MFA) in rhetoric.

“I was terrified when I first came to UNM. I couldn’t find a sense of community – I’m not an athlete or a sorority girl. I met with Levi [Romero], who helped me see community organizations where I could belong and thrive.  I met Irene. It was huge to have a job, but Chicana and Chicano Studies also became my home. It isn’t just an academic relationship. They understand, empower and push me,” she said.

Romo learned about Taos by leaving it. “I didn’t know New Mexico history. I grew up in Taos and had never heard of the Pueblo Revolt! I didn’t know about Cesar Chavez,” she said, adding that she had good teachers, but the school had no cultural groups for the students.

“Through my family and community, I was immersed in the culture, with the Guadalupanas, penitentes and acequia culture, but the school’s mariachi group had to fundraise to carry on our traditional practices, which are not only important for their education, but for their identity and development,” Romo said.

Vasquez said that Romo absorbed all she learned and is working with community-based organizations to develop programs for students like her. “We have youth still who feel marginalized. We are not graduating the numbers we should,” she said, adding that that was the intent behind developing ethnic studies programs during the civil rights era.

Blazing a trail
Robert Jefferson, director, Africana Studies, said, “The departmentalization of Chicana and Chicano Studies raised the bar of expectations for all ethnic studies programs here at UNM. As for Africana Studies, we must bring continuity to our course offerings and build capacity so that we can also have similar success in the near future.”