Civil Engineers talk about infrastructure resilience in a global way

Stone presented a talk on ways to apply resilience theory to socio-ecological systems and how that framework can be applied to water resources infrastructure projects, while Taha chaired the workshop and talked about methods to quantify infrastructure resilience.

“Egypt is facing many of the same development challenges we are here in the southwest with respect to population growth, water scarcity and climate change,” said Stone. “We have an opportunity to learn from each other’s experiences.”

Mark Stone lecturing at US - Egypt Workshop: Toward Resilient and Sustainable Infrastructure Development at the New Suez Canal Region in Egypt.

Taha, a native Egyptian with many contacts in the country, conducts research at UNM on ways to monitor bridges for signs of stress. At the conference, he spoke about how having monitoring systems in place on structures can help plan for and recover from severe natural events such as earthquakes, floods and hurricanes. He said with proper monitoring in place the resilience of infrastructure is much easier to evaluate.

Egypt has just completed a massive engineering project to double the capacity of the Suez Canal. Ships can now travel both ways on the canal, where once they had to wait hours to join a northbound or southbound convoy on the slow journey between the Mediterranean and the Red Sea.

The canal once had one tunnel running beneath it connecting Sinai Peninsula to Egypt. Under the current plan Egypt plans to build six additional tunnels,, including railways. It is part of a vast redevelopment plan for the area between the canal and Cairo, a hundred miles to the west.

“Egypt would like to develop all of the area east of Cairo up to the Suez Canal and make this the new capital of Egypt within the next 20 years,” Taha said. “They want to make it a mega-size development of areas including an area for IT development like Silicon Valley, an area for heavy manufacturing development and many agricultural areas.” 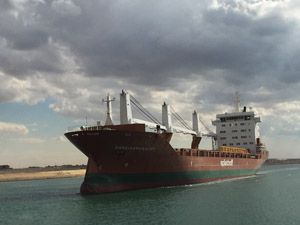 A ship in Suez Canal.

Redevelopment of land between the canal and Cairo will require enormous infrastructure projects, and Taha noted those projects must be built with some attention to the impacts on the changing natural environment and the social impact on the people. Resilience, he said, will be fundamental to the success of the effort.

Resilience, the ability to withstand or recover from disruptive events such as earthquakes, hurricanes and wildfires is becoming increasingly important at UNM. Taha is now leading a group of faculty members across campus interested in the concept. He and Stone taught a class last fall focused on developing resilient communities at the request of students.

The idea of resilience extends far beyond the traditional boundaries of civil engineering. Taha said it is very difficult to think about the intense math focus of engineering and realize there is much more that could be included. “I feel like I have to change my brain,” said Taha. “I need to think and teach more about the social and environmental impact of the structures we build than I ever did before.”

Stone said, “The students are easily able to incorporate the theories of resilience into engineering design. To them, the question is why don’t we always do it this way? They’re not hard-wired with the traditional approach to design.”

That class on resilience was extended in smaller form into the spring semester and students are now engaged in finding a way to build a community center structure in Nepal that is capable of withstanding earthquakes and other disruptive events.