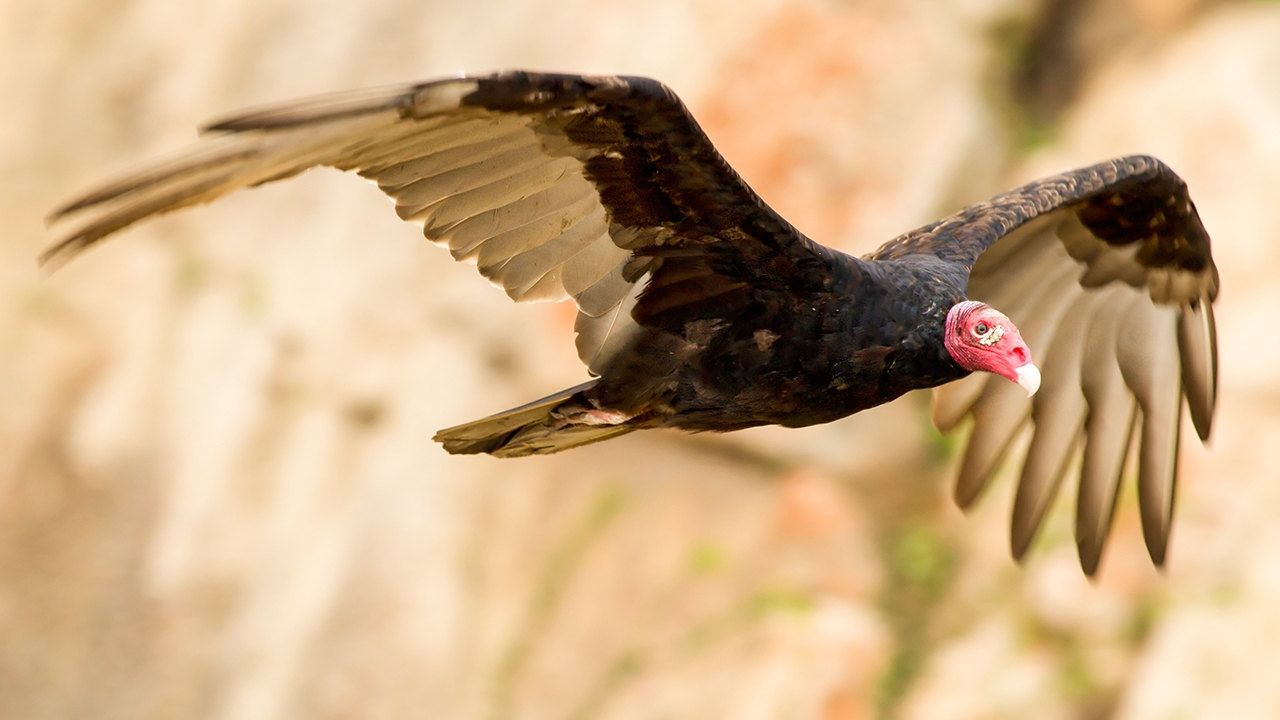 such as the turkey vulture (shown here), American kestrel and prairie falcon are a few of the bird species that have declined in the Mojave desert due to climate change. 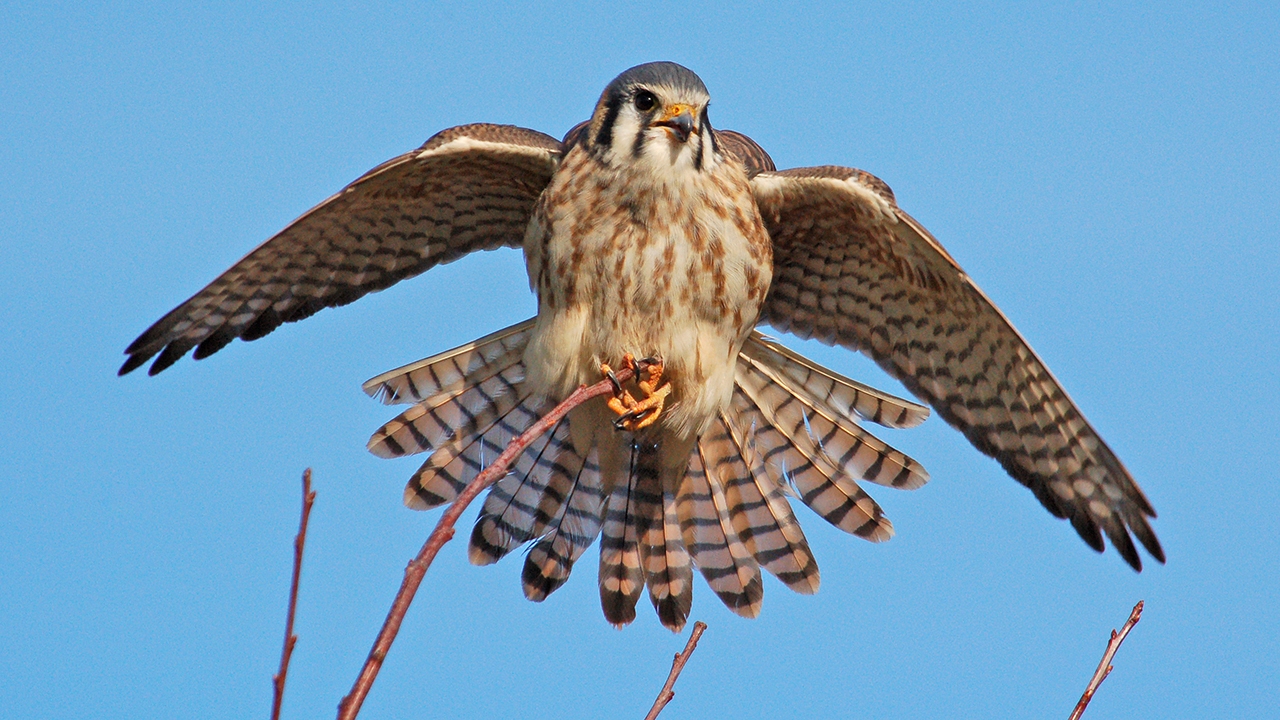 eyes prey from its perch on tree branch.

Everyday scientists uncover many negative attributes associated with climate change. As temperatures continue to rise, the effects are subtle in some cases and more dramatic in others. New research conducted by scientists at The University of New Mexico and the University of California-Berkeley helps illustrate this point as deserts get drier and animals, in particular birds, try to adapt to the growing heat and diminishing resources.

The conundrum in this case is the simple fact that desert birds need water to cool off, while deserts continue with accelerated warming and drying threatening any number of desert species including large birds. It’s the focus of a study titled, Cooling requirements fueled the collapse of a desert bird community from climate change, that appeared in the journal Proceedings of the National Academy of Sciences recently.

Building upon the previous research, the new study, which includes lead author Eric Riddell, a postdoctoral researcher and senior author Steven Beissinger, both from UC Berkeley’s Museum of Vertebrate Zoology, and co-author and Professor Blair Wolf from the Department of Biology at The University of New Mexico, and other institutions including UC-Santa Cruz and the San Diego Natural History Museum, links species-specific water requirements for cooling body temperature related to climate change to the collapse of a Mojave Desert bird community over the past century. Prior to the new study, there was little evidence that physiological limitations have contributed to species declines.

"The most threatened turn out to be larger birds, and those that have an insect or animal diet. They were especially vulnerable to increased cooling costs because they obtain water primarily from their food." –  Professor Blair Wolf, UNM Department of Biology

“The previous study looked at these large faunal surveys in the early 1900’s and compared them to new surveys, to find clues to the primary drivers related to changes in avian occupancy of the Mojave Desert over the past 100 years,” said Wolf. “The primary driver they found was a decrease in precipitation. They discovered that after looking at 60 sites over the last 50 to 70 years, that 43 percent of species at each site were in high probability of decline in occupancy including 39 out of 135 breeding bird species.”

Support from a recent National Science Foundation grant helped provide the impetus for the Grinnell Resurvey Project, a 15-year effort to revisit and record wildlife at sites around California visited by UC Berkeley biologist Joseph Grinnell and his colleagues at the Museum of Vertebrate Zoology between 1904 and 1940.

The scientist’s latest findings come from comparing levels of species declines to computer simulations of how “virtual birds” must deal with heat on an average hot day in Death Valley, which can be in the 30s Celsius — 90s Fahrenheit — with low humidity. These temperatures are, on average, 2 C (3.6 F) hotter than 100 years ago. During the summer in the Mojave Desert, air temperatures are often in the high 40s C (110+F) and can exceed 50 C placing very high demands for evaporative cooling for the bird community. The birds that the model predicted would require the most extra water today, compared to a 100 years ago, were the species that had declined the most in the Mojave Desert over the past century.

The research process involved Riddell using a modeling approach using biophysics to link bird physiology to these species declines. He modeled the heat balance of 50 different species of desert birds on a computer and obtained physical data on each from specimens in the Museum of Vertebrate Zoology. Data such as body size, as well as reflectance of feathers, length of feathers and depth of feathers on the back and belly were needed to build the heat balance model.  Riddell validated the model by comparing its predictions to physiological data in captive birds from Wolf’s prior studies of avian thermoregulation in the heat. He then ran the model varying conditions for each bird species – from very high heat loads where birds stayed in the sun all day to remaining in the shade all day – and at various temperatures.

From these virtual experiments, the researchers were able to obtain solid estimates of the amount of extra water needed for evaporative cooling by each bird species today compared to 100 years ago, and what these birds will need in the future, under different climate change scenarios. For example, a 30 percent increase in a water requirement could mean that larger birds have to catch an extra 60 to 70 bugs per day to survive the increased heat.

Diet in particular is likely to exacerbate cooling costs by determining the primary source of water intake. Compared to seed or plant-eating species, birds with animal-based diets tend to have higher resting water loss rates, infrequently drink from free standing water, and rely on preformed water from their prey during the hottest, driest times of year. Birds with more seed or plant-based diets tend to be dependent on drinking water and meeting their requirements for water intake depends more on the distance to free surface water.

“The species occupying the hottest, driest sites were less likely to persist, while birds with the greatest water requirements for cooling their body temperature experienced the largest declines,” said Wolf. “The most threatened turn out to be larger birds, and those that have an insect or animal diet. They were especially vulnerable to increased cooling costs because they obtain water primarily from their food. Climate warming increases the evaporative cooling demand for birds, which in turn affects geographic patterns in body size and future extinction risk.”

The virtual bird simulation was unique in that it allowed the scientists to identify the impact of a daily physiological stressor in the desert — heat — as birds leave the shade to forage for food or find mates. Other aspects of a changing environment, such as changing food sources and fire, only add to the heat stress.

Some of the bird species that have declined include the American kestrel, prairie falcon and turkey vulture, all large and carnivorous. Similarly, as have small insect-eaters like the white-throated swift, violet-green swallow, olive-sided flycatcher, Western meadowlark and Western bluebird. Smaller birds that eat seeds or are omnivores are less threatened, according to the model.

“This is one of the first studies that directly ties the increase in physiological demands from a warmer and drier climate to the changes that are taking place in biodiversity,” said Beissinger. “Our study points to a direct effect of climate change via increased water demands for evaporative cooling to maintain body temperature in the comfort zone.”

Wolf notes that this study shows how increased temperatures are becoming an increasingly potent driver of decline in bird populations in North America and shows how tightly linked animals are to their environments.