University Stadium seats 39,224 Lobo faithful, but if you invite ESPN, suddenly 98 million households can watch UNM take on the Fresno State Bulldogs on Friday, Sept. 26 at 6 p.m. It’s a good reason to move homecoming from its Saturday tradition to primetime Friday.

UNM Athletics Sports Information Director Frank Mercogliano is more than pleased with the coverage UNM will get with ESPN, or the collegiate station, ESPNU, which reaches 74 million households. “There are only two Division 1 games being played that day – ours and Middle Tennessee State versus Old Dominion. We have a captive audience for our game. We can’t get a better time slot.”

ESPN likes the pageantry of college sports. “Homecoming, the spirit squad, the band, will likely all be featured in cutaway shots,” said Brian DeSpain, operations specialist for the UNM football program. Cutaways are shots that help create a sense of place for the game. Mercogliano said that the ESPN crew is notified in advance that the game is UNM’s homecoming, and they arrive the day before the game.  “Last time they included shots from the [Sandia Peak] Tram and used cutaways of The Pit because it is nationally recognized,” he said.

Coming home via the tube 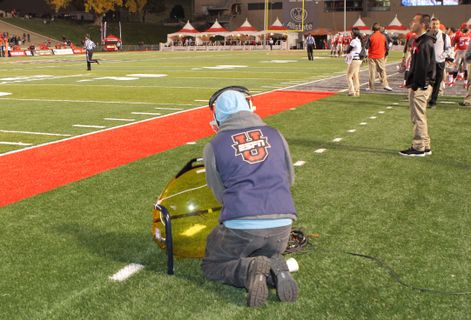 A engineer captures sound for ESPNU at field level.

“Homecoming is a weeklong series of activities with the game being one element of the tradition. We perform a balancing act of television exposure for the football program,” said Tim Cass, associate director of UNM Athletics. He added that for UNM alumni, seeing their alma mater play on national television is a point of pride.

Not everyone can travel to New Mexico for homecoming, but they can attend viewing parties in many cities. “Alumni are happy to see UNM in the scroller at the bottom of the screen. Athletics is a connection to the university for life,” Cass said.

Perhaps tailgating won’t be the big pre-game event it would be for a Saturday game, but Cass said that he wouldn’t be surprised to see people take off work early to engage in some parking lot partying. “People are pretty creative,” he said.

Game day buzz
Friday night is a good night for football, with buzz about the game filling the air. “As with the rally in the SUB, it adds to the atmosphere on campus and builds momentum,” DeSpain said.

Television is the ruling body of college sports, Cass said. “Each league has a different formula. A league like Pac 12 can negotiate $12 million to our $3 million in the Mountain West Conference,” he said. Cass added that the league rewards teams that get selected for televised games. “It’s hard to put a price tag on exposure. It raises our visibility, which impacts recruitment. All week ESPN will be promoting the game. It’s like seeing your name in an AP Poll.”

Cass said that UNM has two games, or 30 percent of its home schedule scheduled on ESPN. ROOT or CBS Sports can pick up other games after ESPN makes its selection, he said.

Building an audience
DeSpain said that UNM has a good home schedule with UTEP, Arizona State, Fresno State, San Diego State, Boise State and Wyoming. Within the MWC last season Fresno finished at 7-1, with an overall record of 11-2, while in the MWC, Boise State finished at 6-2, with an overall record of 8-5. “Those are the two best in the MWC. We should be able to draw a crowd,” he said, adding that UTEP and Arizona State are “very drivable” road trips, which should add seats in the stands.

Season ticket sales are ahead of schedule, Cass said. “It helps that we have attractive opening opponents in UTEP and Arizona State.” Lindy’s Sports notes that the Lobos’ most difficult non-conference game is against Arizona State. “If they play well in those first two games, the fans will take notice.”

We are New Mexico
Proving that the Lobos are New Mexico, the football team currently has 28 players from instate on its roster, with more likely to be added once the semester starts. “We often get walk-ons, including some that we’re able to put on scholarship,” DeSpain said. The roster features 115 players with 85 on scholarship. 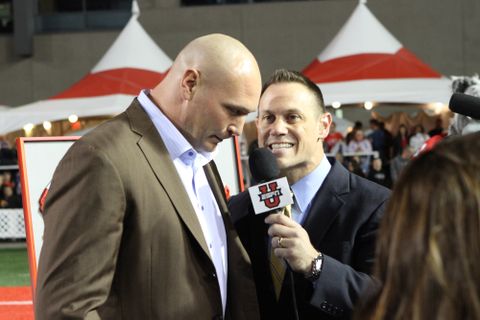 Brian Urlacher was the guest of honor last year as UNM broke from tradition and retired his No. 44 jersey.

“A big focus of our recruitment effort is a strong walk on program, which gives players a chance to play and prove themselves through hard work. Coach Bob Davie and his staff are big on recruiting within New Mexico,” Cass said.

This year Coach Davie has a full roster with a full complement of scholarship student athletes. The roster turns over 25 to 30 percent each year and reinvents itself every four years. “Having a full roster is a big thing. We were down several scholarship positions. We have a larger pool of talent, with many talented young players who have been with Coach Davie for two years. That has increased the number of experienced players we have,” DeSpain said.

He added that Kevin Cosgrove was promoted to defensive coordinator after two years as inside linebackers’ coach.

The last time ESPN was at a Lobo football game was when UNM broke from tradition against retiring football numbers and retired Brian Urlacher’s jersey, No. 44. It was a Friday night game against Air Force. In addition to the on-field festivities, Urlacher visited with the Lobo players in the locker room. The only cameras present were ESPN’s and LoboTV.

UNM and ESPN did right by Urlacher. They will do homecoming proud.