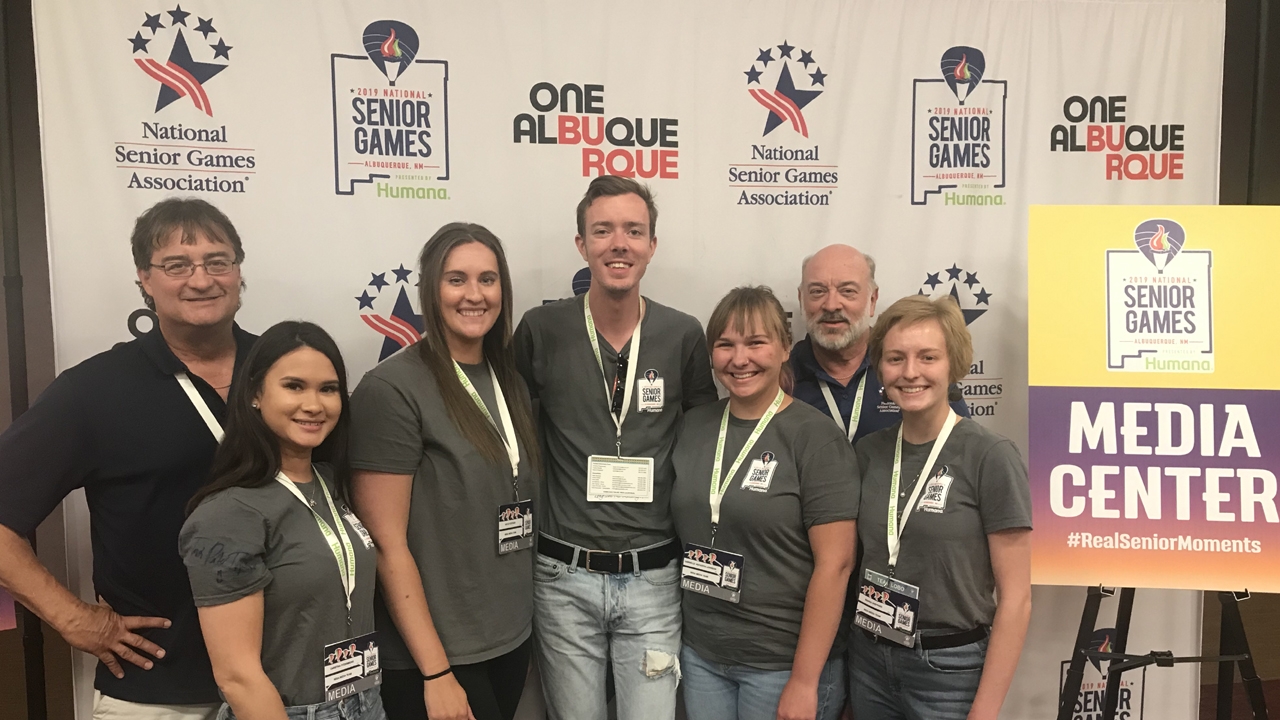 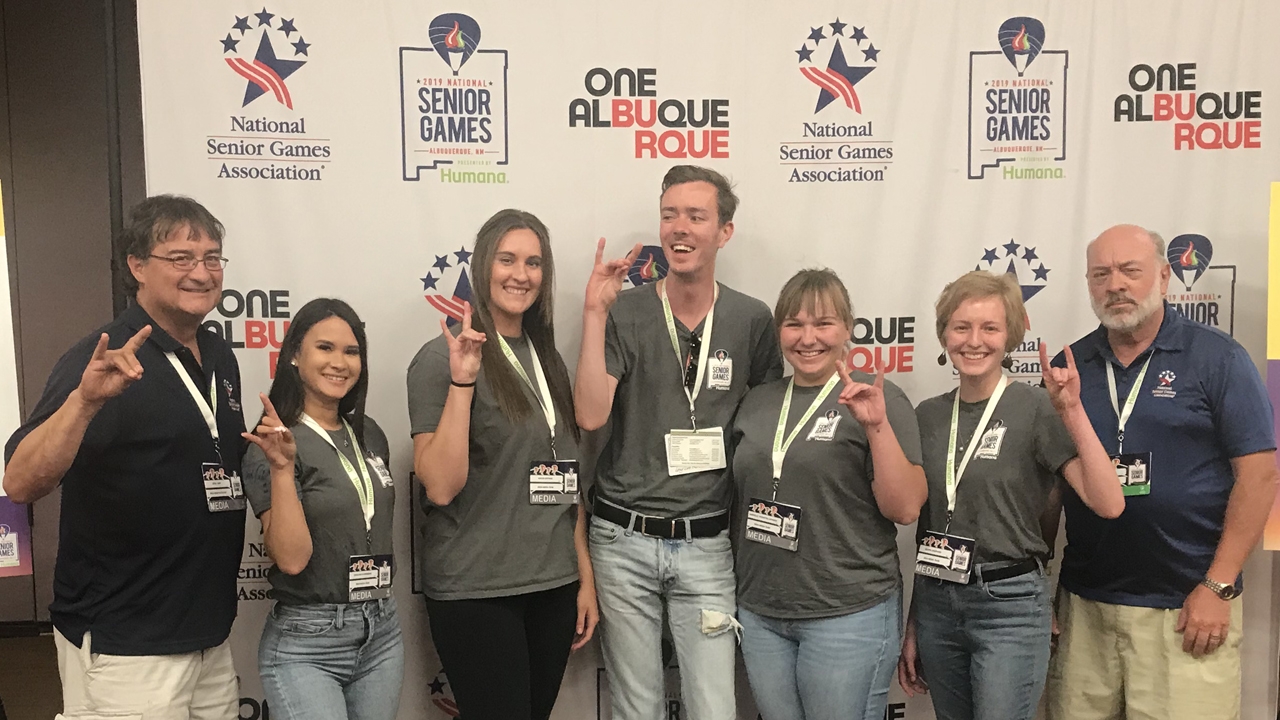 Senior athletes participating in the 2019 National Senior Games presented by Humana weren’t the only ones to shine during the 12-day event. A group of interns from The University of New Mexico’s Communication & Journalism department played a key role in the delivery of The Games Daily News, an online platform telling the stories of the various athletes who competed.

The group of five interns, including Hayley Estrada, Christina Fitzsimmons, Tim Harris, Gabrielle Hockstra-Johnson and Seairra Sheppard, comprised Team Lobo and made their presence known as part of the National Senior Games.

The Media Center for the National Senior Games performs many functions, such as handling local and national media relations, issuing credentials, collecting photos and video and managing social media. But the heart of the operation is offering The Games Daily News, the online platform of daily features and links.

NSGA is grateful to The University of New Mexico and its Department of Communication & Journalism for helping the association recruit a team of talented and bright students to give impressions of what The Games are all about.

“I do not like the term ‘intern’ and prefer to call these rising stars ‘content generators’ for our operation,” says NSGA’s Director of Communications and Media Del Moon. “They not only went out and brought back interesting athlete and sport features, but they also took photos, and shot some video. They all gathered social media content and brought back leads for future athlete features. This was a massive event with many things going on at the same time, so they became our eyes and ears.”

The cadre was dubbed “Team Lobo” after the school mascot, and the UNM connection goes even deeper as Steve Carr, a manager for the University’s communication and marketing department, was provided on loan to be the Games Daily News managing editor. In addition to this core team, the Media Center also enjoyed the services of photography major Katie Stratman from Western Kentucky University and Vincent Pensabene, a sports management major from the University of South Florida serving as a sports information assistant.

With the promotion of the #RealSeniorMoments hashtag campaign in mind, the NSG asked Team Lobo to share their own perspectives about what they witnessed:

Hayley Estrada
"This opportunity has been a great chance to not only gain experience in journalism, but also to witness the excitement and inspiration these athletes have brought to my hometown. The motivation, determination, and attitude of every athlete here made me realize that life doesn’t have to slow down with age. They showed me that it is never too late to pick up a paddle, run a mile or even to shoot the shot you’ve always wanted, even if there are challenges holding us back.

"For me, every sport that I watched and every athlete that I spoke to made this entire experience so exciting and memorable. Before the Games started, I expected to meet athletes with incredible life stories about perseverance and strength, and I did. However, I wasn’t prepared to make life-changing friendships that I now have with many of the athletes."

Christina Fitzsimmons
"Before the National Senior Games, my perspective on aging was completely different from what it is now. I thought after you hit 70, you were always in bed and could barely walk. Now, I know that is completely wrong.

"Throughout my time being here at The Games, I was able to talk to many athletes who were well over 70, and it’s amazing how the athletes just keep going regardless of their health conditions or age.

"During The Games, I was able to experience these real senior moments of the athletes and be inspired by their stories on how they began playing the sports, even when they were 60 years old and older. I have never played a sport before, but always wish I had back in high school. Now, I know that it’s not too late for me to start."

Tim Harris
"I wasn’t sure what to expect when I first began reporting, but what I ended up learning is not at all what I could have planned for. The National Senior Games, as I understand it now, is much less about competition and more about the utility that staying active and competing adds to an athlete’s life. Nearly every single competitor I met gave me some version of the same advice: find something you love, don’t quit and keep moving.

"Before I came to write for the Games, I knew seniors had the talent to compete, I just hadn’t realized as to what extent. To see the men and women on the track making new records, and players on the basketball court throwing elbows was amazing. They made clear as to how important it is to stay active through all stages of life. I looked at these competitors and thought “that’s where I want to be when I get to that age.”

"Something that left an impression on me while at the Games was this quote on a competitor’s shirt: 'You don’t stop playing because you grow old, you grow old because you stop playing,' and to that extent, these amazing people have never grown old, and have inspired me to do the same."

Seairra Sheppard
"This past week working for the 2019 National Senior Games presented by Humana has been incredible. I’ve gotten to meet a lot of amazing and interesting athletes, and the entirety of The Games has inspired me.

"On a personal note, I have been encouraged to take my own health seriously, and I'm no longer discouraged about growing older. I now have proof, through these fantastic men and women, that if I take care of myself I don’t have to be stuck in a nursing home at age 75, and that feels amazing.

"I felt so empowered watching the athletes excel at sports that I myself find intimidating (such as running a 10k). I’ve learned it’s never too late to learn a new sport, and that just like these runners, swimmers and cyclists, if I put my mind to something challenging and give it my all, then I can do it.

"This experience, the people I’ve met and the challenges I’ve witnessed is something I will never forget. It will impact the way I age, and one day I, too, hope to race in the National Senior Games."

Steve Carr, Team Lobo Managing Editor
"The National Senior Games was a great experience for the students from UNM’s Communications & Journalism department. They did an outstanding job of going out daily and executing the assignments given to them. Each day I looked forward to reading the content they created and learning more about the incredible athletes that participated in The Games.

"As a UNM staff member, it’s always important to keep in mind our mission – the education of our students. It was a pleasure to mentor and help teach these students while watching them shine in an area most knew little about beforehand. I hope the experiences, photos and stories written and taken by this great group of content generators about the senior athletes that participated inspire one and all. I am very proud of the way Team Lobo represented The University of New Mexico and the National Senior Games."