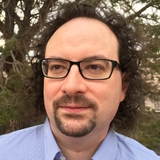 Matthew Lakin, assistant professor in the Department of Computer Science at The University of New Mexico, has been selected for a National Science Foundation CAREER Award for a project that seeks to use DNA nanotechnology to program the behavior of living cells.

His research, which combines elements of computer science and synthetic biology, focuses on ways to control the behavior of cells and molecules for applications that include a wide variety of medical diagnostics and therapeutic treatment.

Lakin’s NSF CAREER Award project centers on the DNA double helix molecular structure. He explains that all naturally-occurring DNA double helices twist in the same direction — to the right. These are referred to as D-DNA. This means that molecular devices made from D-DNA can interact directly with cellular nucleic acids. However, such devices are easily recognized and degraded by cellular defenses because they look similar to naturally-occurring D-DNA molecules. Although a wide range of D-DNA molecular sensors, circuits and actuators have been developed, this problem limits their utility in living cells and organisms.

“Unwanted D-DNA would be essentially eaten up and won’t last very long,” he said. “To counter that, we are engineering mirror-image, left-handed synthetic DNA that twists in the opposite direction that can then resist degradation in the cellular environment.”

More specifically, the project will study the transmission of molecular information between L-DNA and D-DNA in these novel circuit designs, which process information along similar lines to more familiar digital computers, but which are capable of entering and functioning within individual cells. The project will combine experimental and computational research to optimize the behavior of these systems and to demonstrate their use to sense and control the behavior of human cells.

Lakin said enhancing the capabilities of these “molecular computers” to survive inside cells and function reliably could lead to improved methods of detection and treatment and drug delivery for diseases like cancer. It could also be applied to nonmedical applications, like improved environmental sensing.

Lakin’s CAREER project will include an outreach segment with the ¡Explora! science museum in Albuquerque, where local high school students — with a special focus on students from underrepresented groups — can participate in hands-on biotechnology minicourses, something that is not typically covered in the high school science curriculum. The goal is to enhance the STEM educational and workforce development pipeline in New Mexico.

After obtaining his bachelor’s and Ph.D. degrees in computer science from the University of Cambridge in the United Kingdom, Lakin spent two years at Microsoft Research. There, he worked on applications of computational modeling tools in biology, synthetic biology and DNA nanotechnology. Fascinated by the idea of applying his skills to program biological systems instead of computers, he subsequently transitioned to his current area of interdisciplinary research interest at the intersection of bioengineering and computer science.

Lakin joined UNM in 2011 as a postdoctoral researcher working with Darko Stefanovic, professor and now chair of the Department of Computer Science. He became a research assistant professor in 2015 and joined the tenure-track ranks of the department in 2017. Unusually for a computer scientist, he has laboratory space in the Center for Biomedical Engineering in Centennial Engineering Center. Lakin also holds a courtesy assistant professor post in the Department of Chemical and Biological Engineering and collaborates frequently with faculty at the UNM School of Medicine, including on his CAREER award project.

Although he has had a variety of large, funded projects, he regards receiving the NSF CAREER Award as an important step forward.

“It’s a great honor to be recognized and have a five-year award, which is a good amount of time to develop my research,” he said.

He said it is also exciting to bring the research from the theoretical to the experimental realm.

“It’s a big step and it’s exciting to have the potential to bring this work into human cells,” Lakin said. “It brings all these things together — the theoretical computation with practical utility.”

The NSF CAREER program is geared toward helping early-career faculty get strong starts on their academic careers. The award is NSF’s most prestigious award in support of junior faculty who exemplify the role of teacher-scholars through outstanding research, excellent education, and the integration of education and research.