The University of New Mexico’s Configurable Space Microsystems Innovations and Applications Center (COSMIAC) is preparing its third CubeSat, a small, cube-shaped satellite, for a space launch.

The project, called Scintillation Observations and Response of the Ionosphere to Electrodynamics (SORTIE), involves the launch of a CubeSat to collect data to study the ionospheric F-region.

Alonzo Vera, a scientist at COSMIAC and principal investigator for the project on the UNM side, said that the ionosphere affects radio signals including satellite communication and GPS, but that there are many aspects of it that are not understood.

There are many, many things we don’t know and there is a lot of room for improvement of our current models. We are hoping to gather more data to have a more precise model of how it [the ionosphere] behaves,” Vera said. “The goal of the mission will be to evaluate how our current knowledge and models of some aspects of the ionosphere relates to reality.” 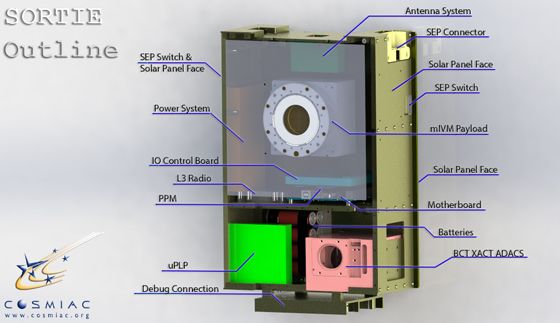 The SORTIE mission features a 6U satellite, which stands for 6 units. A 1-unit CubeSat measures 10×10×10. 6U CubeSats are approximately 10x20x30 cm. This larger size allows for more complex payloads and data collection.

SORTIE’s scientific payload is composed of two instruments: an ion velocity meter to measure the direction of ionospheric flows and a micro planar langmuir probe to measure ionospheric densities. The CubeSat’s components are a command and data-handling unit (the brain of the satellite), a UHF radio, the power subsystem, including batteries to store energy and solar panels to gather energy from the sun, and an attitude determination and control system to keep the satellite aligned properly after it is launched from the spacecraft.

Although researchers won’t know which mission the CubeSat will be a part of, it is estimated that it will be launched around spring 2017.

Craig Kief, deputy director of COSMIAC, explained that the 6U CubeSat is a relatively new format for CubeSats and there have been few 6U satellite launches, especially at university centers.

Kief said the CubeSat is needed to study the ionosphere because we can’t study it here on Earth. It must be studied in its own environment. This latest mission will also help establish COSMIAC, a part of the School of Engineering, as a center of expertise in this area.

“The SORTIE mission is important to us in many ways,” Kief said. “It puts us professionally on the stage for more collaborations with bigger projects with major universities.”

The mission is being funded by a NASA Heliophysics Technology and Instrument Development (H-TIDeS) program grant, of which University of New Mexico is receiving $250,000. The project is led by Atmospheric and Space Technology Research Associates (ASTRA) from Boulder, Colorado. The role of the UNM team is to be integrators of the CubeSat. The Air Force Research Laboratory (AFRL) and the University of Texas-Dallas will be providing the two main scientific instruments for the satellite, with the UNM team putting all the pieces together with the assistance of AFRL. COSMIAC will build the satellite and collect the data from it.

SORTIE is the second 6U satellite built at COSMIAC and its third CubeSat space mission. Trailblazer was launched in 2013 in partnership with AFRL and the University of Texas at El Paso. ORS Squared, COSMIAC’s first 6U satellite, was built in 2014.

Want to learn how to design and build a satellite?