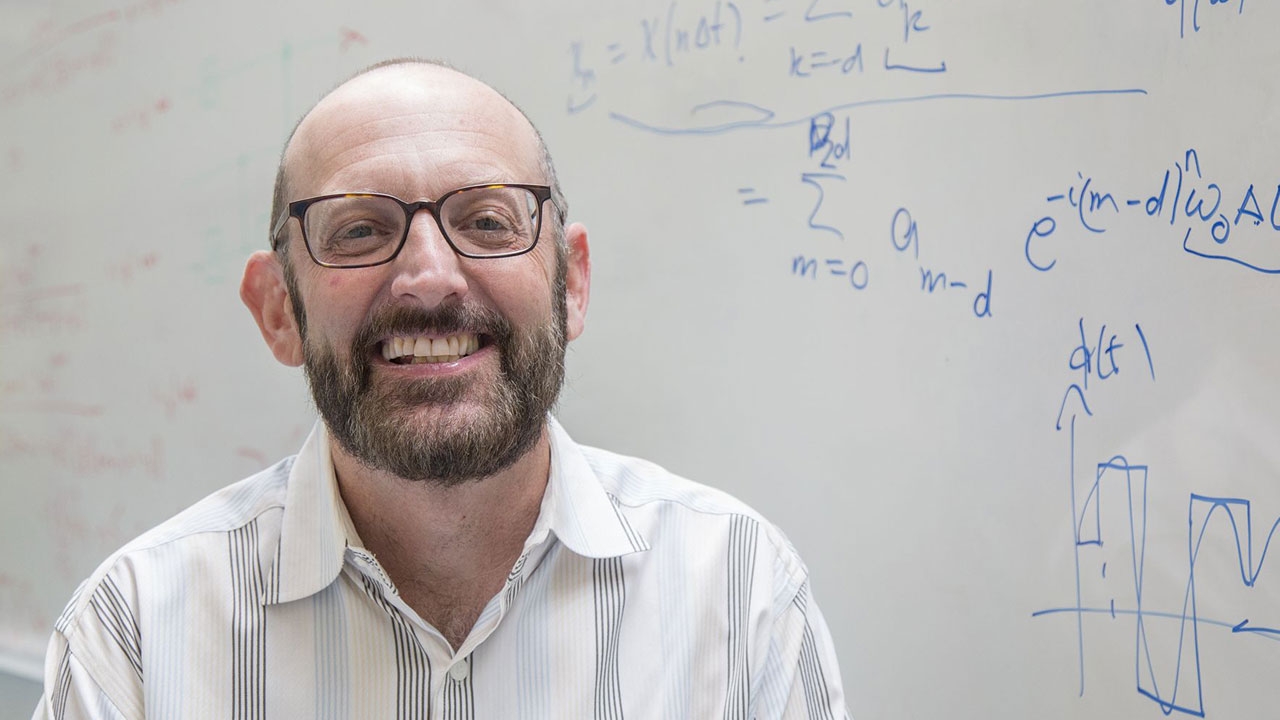 The University of New Mexico’s Center for Quantum Information and Control (CQuIC) recently named Professor Ivan Deutsch as the Center’s new director. Deutsch was named to the position when former Director and Professor Carlton Caves retired.

CQuIC is a college-wide center in the College of Arts & Sciences that is also supported by a center-wide grant from the National Science Foundation (NSF). CQuIC was established in 2009 as a followup to the Center for Advanced Studies (CAS) that pioneered quantum optics in the 1980s.

CQuIC’s focus is on the control of complex quantum systems, with an overarching goal of making quantum systems march to the researchers’ orders instead of doing what comes naturally. Such control is an essential part of the “Second Quantum Revolution,” which promises a radically new paradigm for information processing tasks such as communications, computing, and sensing. Quantum Information Science (QIS) also provides a new framework for understanding the fundamental workings of the universe such as the mysteries of black holes.

Deutsch, a Regents’ Professor in the Department of Physics and Astronomy, came to UNM in 1995 and joined Caves to establish a group in what was then, the brand new field of QIS.

“Carl called us the Information Physics Group, at the intersection between information theory and physics,” said Deutsch. “QIS didn't even have a name at that time. The quantum part of it had just kind of burst onto the scene in 1994 with a big discovery of a quantum algorithm that could break all the secret codes that encode everybody's credit card numbers and every secret on the Internet.”

CQuIC’s research is organized into four main research areas: quantum information and computation, quantum control and measurement, quantum metrology, and quantum optics and communication. CQuIC has extensive theoretical and experimental research programs in all these areas. CQuIC took part in a big competition for a large center-wide grant in 2016. It received the renewal from the National Science Foundation (NSF), and now leads one of the biggest efforts in the country in QIS research.

“As part of the renewal, CQuIC was made into an NSF Focused a Research Hub in Theoretical Physics (FRHTP), one of only two in the country,” Deutsch proudly points out. “We are the FRHTP for QIS. The Hub is designed for the professional development of postdoctoral researchers. This turbocharges our Center, which impacts student researchers as well.”

CQuIC has received new awards, including a share of the $15 million NSF initiative dubbed the Software-Tailored Architecture for Quantum co-design (STAQ) project, an effort that seeks to demonstrate a quantum advantage over traditional computers within five years using ion trap technology. The program is the NSF’s largest quantum computing effort to date. Also announced recently, CQuIC has received 2 out of 8 in the world, prestigious Google Focus Award gifts to help develop their new quantum computer.

CQuIC currently finds itself in a very unique point in its history. The field of QIS has grown by leaps and bounds around the world, and there's plenty of interest and excitement in the Second Quantum Revolution. The rise of a nascent quantum industry is one of the really big stories.

“IBM, Microsoft, Google, Intel, and other big industrial giants are now making big investments in QIS,” said Deutsch. “This has become a bit of an arms race and there's a lot of international competition, in particular with China who is investing heavily in this area, on the order of $10 billion.

“This international competition together with the rise of a quantum industry has gotten the attention of Washington D.C., and so there's currently bipartisan legislation in Congress, called the National Quantum Initiative (NQI) Act.”

Deutsch said the NQI Act has passed the House and is currently pending in the Senate. The bill calls for increased investments in quantum information science, with an immediate injection of  $1.3 billion in the next five years. The NSF as well as the Department of Energy Laboratories, including Sandia and Los Alamos, stand to be a big part of the increased spending if the legislation is passed. Deutsch says that one of the key components of the NQI is workforce development and interdisciplinary training in QIS.  UNM is poised to play a major role.

Deutsch is focusing his efforts so that UNM will be able to participate and capitalize on the NQI, given CQuIC’s early lead in QIS. It means growing QIS in other departments beyond physics, to include math, chemistry, electrical and computer engineering, and computer science, and also to take advantage of exciting new capabilities at the Center for High Technology Materials (CHTM). CHTM has a separate, related research program in Quantum Materials, which will strengthen UNM’s overall position in quantum technologies. Collaboration between the College of Arts and Sciences and the School of Engineering with be critical for the overall program in QIS.

“UNM is really at the forefront in QIS, building on CQuIC’s pioneering efforts,” said Deutsch. “My goal is to build a strong interdisciplinary program in quantum information science and technology across departments and colleges and to keep that momentum going.”