The CLS is part of a United States government effort to dramatically increase the number of American citizens studying and mastering foreign languages. UNM’s recipients are among 560 other U.S. undergraduate and graduate students who received the CLS scholarship in 2016.

Recipient Joseluis Ayala is an undergraduate student at UNM majoring in International Studies with a concentration in Russian and Arabic. He is also involved in the National Security Studies program and has made significant contributions to the program by predicting the rise of ISIS. 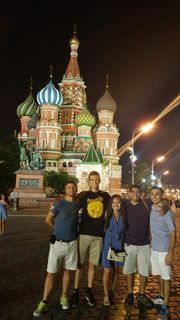 Ayala worked as an intern for the State Department and was the first to travel abroad in his family. He went to Nizhny Novgorod, Russia for three months this summer.

"It is always important to remember where you come from,” says Ayala. “If you are getting a scholarship, you need to give something back. Find ways to recruit and get more students involved in your university.

Ayala is looking into working for the United Nations as a translator and is interested in joining the State Department as a Foreign Service Officer or becoming a diplomat.

Ayala commented that for people studying abroad it's crucial to be outgoing and to make friends in the host culture. Making an effort to use the language, despite how much people laugh, will ultimately help you and improve your language skills.

“Learning a foreign language opens up a world of job opportunities, as our world is globalizing at a rapid rate,” said Ayala. “The need for people who speak other languages has risen significantly as we have entered into an age that requires cross-cultural communication.”

Students like Ayala are already taking the steps necessary to become a more globally-minded citizen by learning another language.

The Global Education Office provides several opportunities for UNM students like Ayala to study abroad. The CLS is one of many scholarships and forms of funding that are available to both undergraduate and graduate students.

Students and parents can learn more about service learning and study abroad opportunities at the upcoming Study Abroad Fair on Thursday, Sept. 1 from 10 a.m.-2 p.m. on the Cornell Mall—across from the SUB. Over 50 countries will be represented at the fair along with more than 20 faculty-led programs, 40 different partners, study abroad advisors, and current and past study abroad participants. For more information, please visit the UNM Study Abroad website.