Stewart will present a talk and meet with students about careers with the DIA. As part of the event, recruitment tables will be set up in the SUB Ballroom for interested students. The event is free to attend and doesn’t require registration in advance, however, participants will be required to sign in before entering the ballroom. 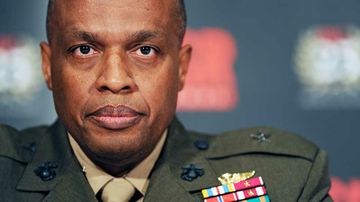 "The Intelligence Community Center of Academic Excellence Program at UNM (NSSP) is designed to help our students become competitive for careers in the sixteen intelligence agencies,” said Frank Gilfeather, Professor Emeritus of Mathematics and Statistics and director for the Office of Strategic Programs. “To date we have had many of our students seek and obtain positions with these and related global and national security organizations.

Lt. Gen. Stewart became the 20th director of the Defense Intelligence Agency and the Commander, Joint Functional Component Command for Intelligence, Surveillance and Reconnaissance in 2015. He is the first Marine Corps director to lead the agency. Prior to this appointment, he served as the Commander, Marine Forces Cyber. DIA provides strategic analysis to the Secretary of Defense and the national security leadership.

The NSSP at UNM is one of 20 similar programs in the United States designated as an IC-CAE Program, which are administered by DIA.

For more information about the National Security Studies Program visit, NSSP or call 505.277.3223.