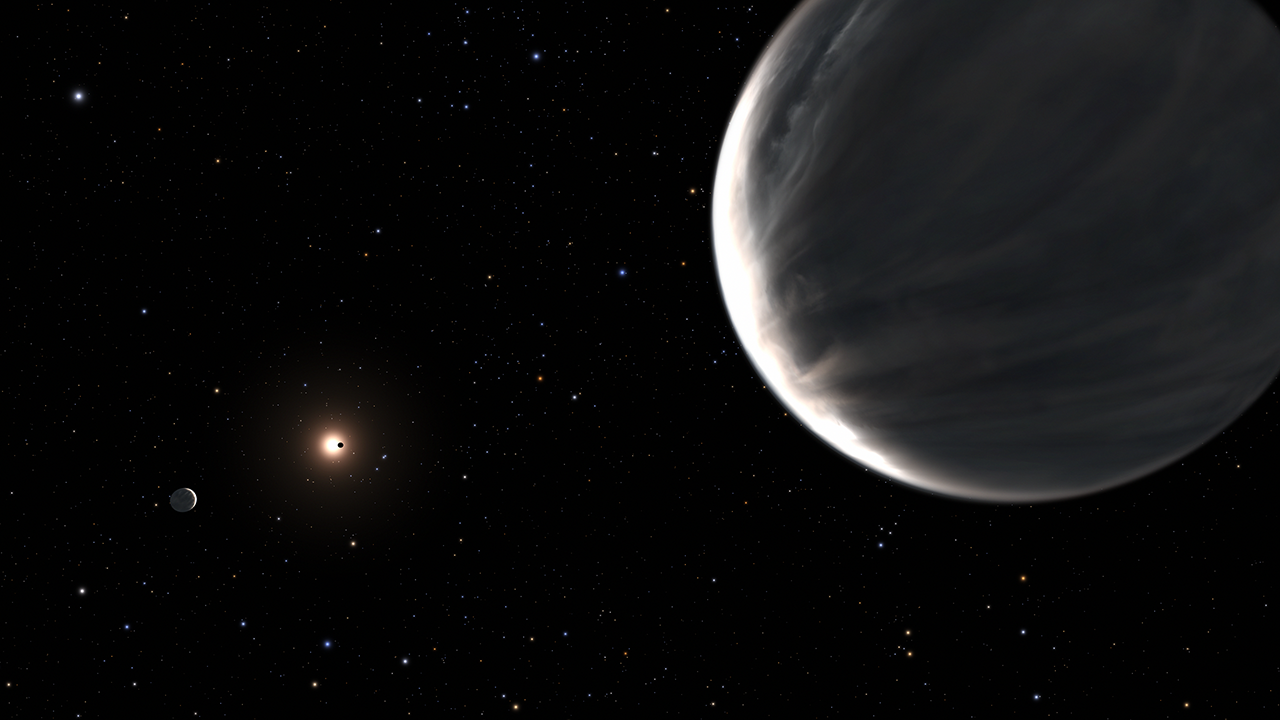 Through a detailed study of a planetary system 218 light-years away, a team of international researchers is providing evidence for the existence of a new type of planet called a water world.

The team, led by Caroline Piaulet, a Ph.D. student of the Trottier Institute for Research on Exoplanets (iREx) at the Université de Montréal, published a detailed study of the Kepler-138 planetary system. The study, titled Evidence for the volatile-rich composition of a 1.5-Earth-radius planet, was published in the journal Nature Astronomy today.

Piaulet used data from NASA's Hubble and Spitzer space telescopes to analyse the composition of exoplanets Kepler-138 c and Kepler-138 d and discovered that the planets as a whole must be composed largely of water.

"We previously thought that planets that were a bit larger than Earth were big balls of metal and rock, like scaled-up versions of Earth, and that’s why we called them super-Earths" explains Björn Benneke, a co-author on the paper. “But this is not the case for these two planets, for which we have found that up to half of their volume is likely to be water,” adds Diana Dragomir, an assistant professor in the Department of Physics and Astronomy at The University of New Mexico and co-author on the study. “These planets are unlike any planets in our Solar System. The closest comparison would be some of the icy moons in the outer Solar System that are also composed of water to a large fraction, with rock found only in the deep interior.”

"Imagine larger versions of Europa or Enceladus, the water-rich moons orbiting Jupiter and Saturn in our own Solar System, but brought much closer to their star," explains Piaulet. “Instead of an icy surface, they would harbour large water vapour envelopes." 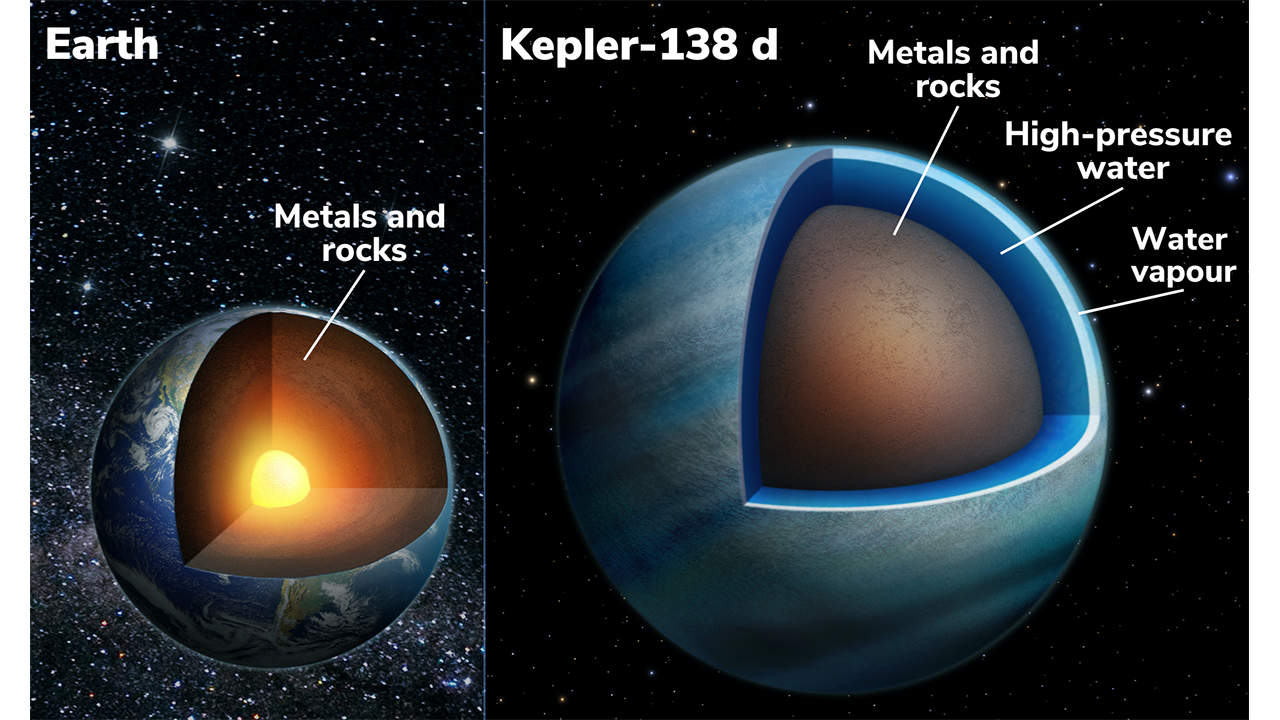 A cross-section comparison highlights the differences between Earth and Kepler-138 d.

Observing Kepler-138 with Hubble and Spitzer
In 2014, data from the Kepler Space Telescope allowed astronomers to announce the detection of three planets orbiting Kepler-138, a small star in the constellation Lyra, 218 light-years from Earth. The light curve – the amount of light received from the star over a certain period of time – showed transits of the planets in front of the star, which are perceived as small periodic dimmings of the star itself.

Benneke and Dragomir came up with the idea of re-observing the planetary system, and they proposed for and obtained time on the Hubble and Spitzer space telescopes, respectively. Their aim was to catch more transits of Kepler-138 d, the third planet in the system, to study its atmosphere.

Dragomir explains that “the Spitzer observations especially can be notoriously difficult to analyze, and initially it did not look like we would be able to pull much useful information out of them. However, I encouraged Caroline to take another stab at analyzing these unique observations. She put in a lot of effort, but it was all worth it in the end.”

When Piaulet analyzed the full set of Kepler, Hubble and Spitzer observations, she found a surprising result: the new observations required the presence of a fourth planet in the system, Kepler-138 e.

A new exoplanet in the system
The newly found planet in the system, Kepler-138 e, is a small planet that is farther from its star than the three others and which takes 38 days to complete an orbit. The planet is in the "habitable" zone of its star, a temperate region where a planet receives just the right amount of heat from its small star to be neither too hot nor too cold to allow the presence of liquid water. The nature of this planet however remains an open question because it does not seem to transit its host star. Observing the exoplanet’s transit would have been the method used by astronomers to determine its size.

With Kepler-138 e now in the picture, the masses of the previously known planets, were measured again via the Transit Timing Variation (TTV) method, which consist of tracking the small variations in the precise moments of the planets' transits in front of their star caused by the gravitational pull of other nearby planets.

Water worlds
With volumes more than three times that of the Earth and masses twice as big, Planets c and d have much lower densities than our own planet. This indicates that they cannot be made of mostly metal and rock like the Earth. This is surprising because most of the planets just slightly bigger than Earth that have been studied in detail so far all seemed to be scaled-up versions of it.

By comparing the size and mass of the planets to models, they conclude that a significant fraction of their volume — up to half of it — should be made of materials that are lighter than rock but heavier than hydrogen or helium (which constitute the bulk of gas giant planets like Jupiter). The most common of these materials is water. These planets were previously only hypothesised and informally called "water worlds" or "ocean planets" by astronomers.

"In this case, I don't really like the term ocean planet, because the use of the word ocean gives the impression that the planet is covered by large liquid water oceans, '' explains Piaulet. “However, we don't know whether this is the case or not for these two planets, given their high temperatures. Instead, below the water vapour atmosphere, we could find liquid water or water in another phase that occurs at high pressures, called supercritical."

“Whether Kepler-138 c and d are among a class of planets - water worlds - that are common but difficult to find, or truly rare, they remind us that exoplanets are often very different from the worlds we are familiar with in our Solar System. These water worlds will continue to stimulate our curiosity and will remain choice targets for astronomers’ most powerful telescopes,” concludes Dragomir.