After a year in the making, the Disney Pixar animated movie “Finding Nemo” has been fully translated into Navajo and is ready for this weekends premiere as “Nemo Ha’deist’ii’." UNM-Gallup Associate Professor Joe Kee was instrumental in the success of this long anticipated project.

“My involvement with ‘Finding Nemo’ goes well beyond my work with just the translation of the movie into the Navajo language,” said Kee. “It extended as far as adapting and dubbing the movie while working with directors and voice actors. My ability to speak Navajo fluently has given me the power to communicate, the knowledge to comprehend, the patience to understand, and the skills to help people.”

In January 2015, Kee was invited by the Navajo Nation Museum and Library to present his resume and credentials to be one of the Navajo translators on the Pixar project. This would be the second film Kee translates into Navajo. In 2013 he was instrumental in the translation of “Star Wars Episode IV: A New Hope” movie.

At an hour and forty-minutes, “Finding Nemo” contains more dialogue lines than the previously translated Star Wars movie. Two translators were selected to completely translate the movie into their native language. This was another historic occasion for the Navajo Nation as this would be only the second time, and a first for an animated version, that a major motion picture would be translated into a Native American language in its entirety.

“I am hopeful that the translations and dubbing of both ‘Star Wars Episode IV: A New Hope’ in 2013 and ‘Finding Nemo’ in 2016 will continue to create momentum and excitement amongst the Navajo youth to learn and relearn their language, and that the translated movies will inspire them to communicate with their elders even more so.”  —Associate Professor Joe Kee

“After the completion of the translation, I began my work on the adaptation process of the movie. The experience opened my eyes to so many avenues that the Navajo language could take in the future,” said Kee. “My role in the adaptation process included recording character voices within strict allotted times, most ranging from three to ten seconds in length. One has to understand that the Navajo language is very descriptive with most conversation pieces being drawn out to clarify words and situations unfamiliar to daily Navajo speech. I had to be very quick on my feet to change, add, delete, and recommend words and phrases within a matter of seconds so that the words are adapted and adjusted smoothly with the movie characters’ lip and mouth movements. Timing was of the essence, even to a mere millisecond.”

One slip of the tongue could cause disruption between the adaption and dubbing process. Kee’s main responsibility was to ensure the Navajo language was spoken correctly, smoothly, and clearly. His work was validated with the successful coaching of the nearly 60 plus voice actors, most of whom lacked skills in reading and writing Navajo. 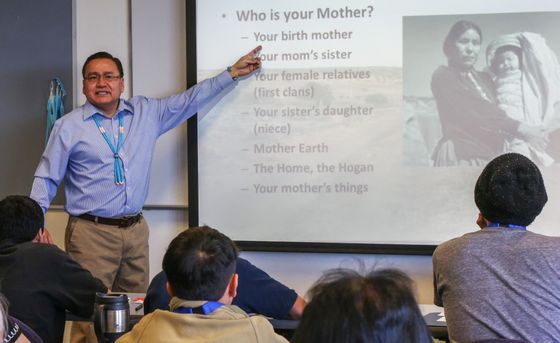 Associate Professor Joe Kee speaks to a group of Native American young men during the Navajo Twin Heroes Conference about the importance of knowing about their Navajo language and culture.

Prior to coming to UNM-Gallup as an assistant professor, Kee taught Navajo language at Northern Arizona University for 12 years. He was promoted to associate professor in the fall of 2015.

Kee notes, “As a faculty member at UNM-Gallup, I have been very fortunate to be supported in my teaching of Navajo. The college recently opened a Language Lab for the Navajo language students at UNM-Gallup. It is a beautiful classroom.”

This project has become one of the most memorable experiences in the Professor’s life—professionally and personally. Originally from Steamboat, Arizona, Kee has maintained deep ties to his family and culture.

“I was born into the Black Streak Wood people clan, born for the Mexican people clan,” said Kee. “My maternal grandfather is of the Big Water people clan and my paternal grandfather is of the Coyote Pass people clan. I grew up with seven brothers and two sisters, all of whom reside in Steamboat. My mother also maintains her roots in Steamboat to this day. I’m always thankful to my mother and my father for raising me with the Navajo language. It’s truly a blessing.”

The professor’s work does not end on any given day, but is an ongoing challenge and struggle to prevent a language from dying and a culture from not being practiced or acknowledged. It is his sincere hope that in using technology as a medium to reach young Navajo people that he can help in the revitalization and preservation of the Navajo language for many generations to come.

The movie will publicly premiere at the following locations March 18 – 24: