On Thursday, Sept. 29, the UNM Department of English hosts distinguished writer Rigoberto González as the featured speaker for the seventh annual Rudolfo and Patricia Anaya Lecture on the Literature of the Southwest. González will speak at 6:30 p.m. in Room 101 of George Pearl Hall, located in the School of Architecture and Planning, with a reception to follow. The lecture is free and open to the public.

González is the author of 14 books, including four books of poetry; 10 books of fiction, including a novel “Crossing Vines” (2003), winner of ForeWord Magazine’s Fiction Book of the Year Award; a collection of short stories “Men Without Blis” (2008); two bilingual children’s books and a series of young adult novels; and three books of nonfiction. 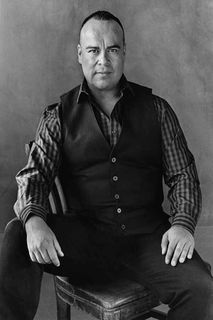 His first poetry collection, “So Often the Pitcher Goes to Water Until It Breaks” (1999), was a National Poetry Series selection, and his recent poetry collection, “Unpeopled Eden” (2013) was the winner of the Lambda Literary Award and the Lenore Marshall Poetry Prize.

His first memoir, “Butterfly Boy: Memories of a Chicano Mariposa” (2006) won the American Book Award from the Before Columbus Foundation. His most recent book is the chapbook “Our Lady of the Crossword” (2015).

González also edited “Camino del Sol: Fifteen Years of Latino and Latina Writing” and has been a tireless supporter of Latino writing.

In addition to his creative work, González is a critic and advocate of Latinx writing, serving as a book columnist for The El Paso Times, the only column dedicated to Latinx literature, which pushes against traditional gender norms in Latino literature and culture. He is currently a critic-at-large with The Los Angeles Times.

The UNM English Department established the annual lecture series on the literature of the Southwest in 2010 through a gift from the renowned fiction writer Rudolfo Anaya and his late wife Patricia Anaya. A founder of UNM’s distinguished Creative Writing Program, Rudolfo Anaya is also an Emeritus Professor of English at UNM. His papers are held at UNM’s Center for Southwest Research. Anaya was recently honored by President Barack Obama as one of 12 recipients of the 2015 National Humanities Medal.

To donate to the series, visit the UNM Foundation website.

Tags: Rudolfo and Patricia Anaya Lecture on the Literature of the Southwest Distinguished writer Rigoberto González