An unpredictable picture of a future fueled by climate change is getting clearer with the help of The University of New Mexico and Department of Energy (DOE).

Department of Mathematics & Statistics Professor Emerita Deborah Sulsky has just been awarded a $3.3 million grant as part of the DOE’s efforts to improve its Energy Exascale Earth System Model (E3SM).

The collaborative project, titled Improved Coupled Climate Simulations in E3SM Through Enhanced Sea‐Ice Mechanics, is just one of seven projects to get a share of the DOE’s $70 million funding. 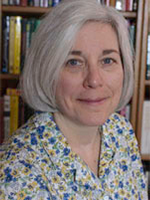 “What we are proposing is if we have a better model for sea ice, we can hopefully get better predictions not just for sea ice, but for climate simulations in general, ” Sulsky said.

“All of these components must work together to make a prediction on what’s going to happen in the future to climate,” Sulsky said.

Sulsky and her team are investigating sea-ice models. Currently, sea-ice is typically incorporated into predictive models as a fluid with variable viscosity.

UNM’s model treats ice as a solid.  That’s because solid ice insulates the warmer ocean from the colder atmosphere. When ice fractures, it exposes the ocean water to the cold air, allowing more seawater to freeze rapidly.

“The energy balance, which is what we’re ultimately after when we’re looking at climate models, is how much solar energy is going in and out overall,” she said. “These fractures are important in determining that energy balance.”

The first two years of this project hinges on developing the numerical methods to solve the problem of fracturing sea ice, and on implementing the code into E3SM while evaluating the model impact from an environmental perspective.

“The models are all predicting the same thing– that the climate is warming,” Sulsky said. The differences in the models have to do with how fast we think things are happening.

If we can have more accurate models, hopefully, we can make better decisions.”

Once solidified, the intricate code is expected to reveal accurate climate simulations 50 to 100 years into the future, while highlighting what needs to be fixed the most.

“The pessimism is well founded. All of the models indicate that climate change is real and that humans are contributing to that climate change. So if we have more accurate models hopefully we can pinpoint where we can be most effective in coming up with solutions,” she said.

Sulsky says eventually UNM postdoctoral and graduate students will be able to join in on the findings.

In the meantime, Sandia Labs and LANL received their own $2.5 million funding to start on their portion of the research.

Together, all parties utilizing this funding from the DOE are aiming for a precise representation of what the Earth will look like if our actions don’t change, and how we can act before it’s too late.

“We know we have to do something. How best to spend resources and how best to attack the problem–those types of things can be addressed with computer simulations. The more accurately we can do that the better off we’ll be I hope,” Sulsky said.

Learn more about the E3SM model and its current predictions by clicking on the link here.